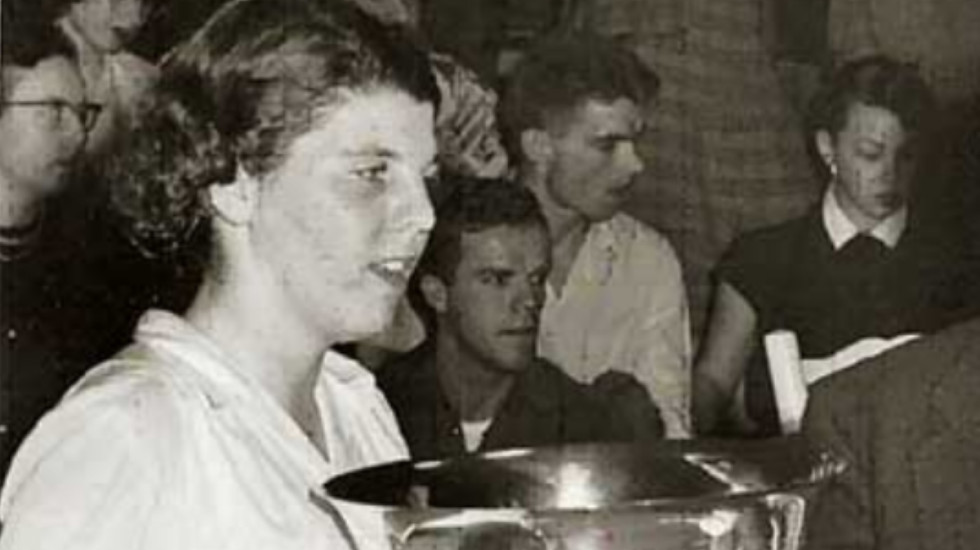 When sisters Susan and Judy Devlin triumphed at their All England debut in 1954, they had taken an early step in building on the legacy of their father, the great all-rounder Frank Devlin. 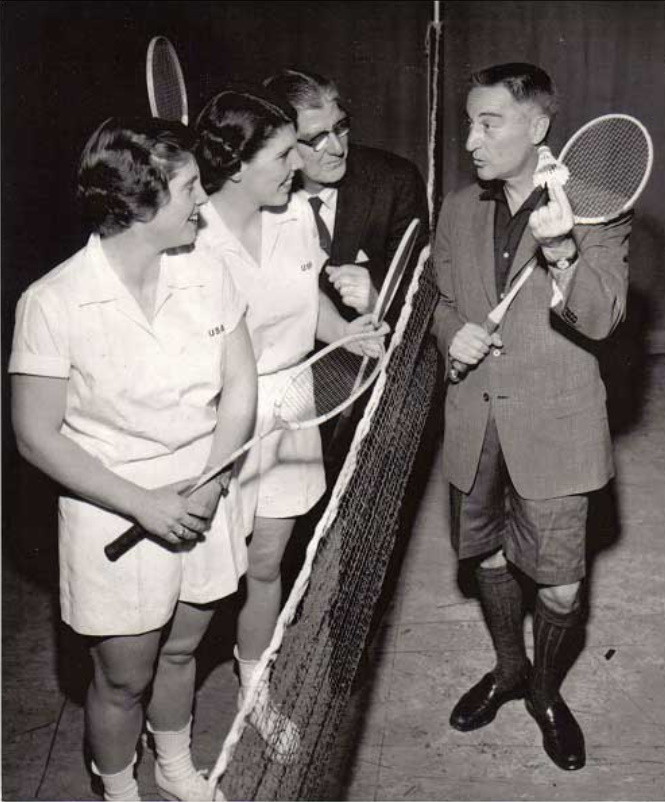 Devlin netted 18 All England titles in a stellar career; years later, his daughters returned to keep the spotlight on that famous surname. Judy attained as much renown, if not more, with 17 All England titles of her own, six of those in women’s doubles with her sister Sue. The Devlins could veritably be called the First Family of badminton.

With Frank for father, and Grace Steed, a leading tennis player, for mother, Sue and Judy were born into sport. What was it like growing up in the Devlin household?

“It was just mother and dad and the things they did,” says Sue Devlin, who took on the surname Peard after marrying the accomplished Ireland international Frank Peard. “We were very young, and we didn’t know what my father’s record was, but we learned fairly young, but it didn’t really have any great impact as far as we were concerned.

“He would play with us when we were young, and just show us various things. The only thing we were was that footwork was important and things should come easily. He would hit with us and he had a couple of very kind friends who had badminton courts of their own, and he would take us over weekends when he wasn’t working to just play with us. Sometimes these people played with us. It was all about playing and to make it as easy as possible for your own body.”

Both Sue and Judy were good at other sports, such as tennis, hockey and lacrosse. Sue and Judy were among the top tennis doubles pairs of their time – on one occasion even making the quarterfinals of the US Open. They also represented the USA internationally in lacrosse.

However, it was at badminton that they sparkled, particularly at the All England between the mid-1950s and the mid-1960s. Sue was also on the first two US teams that won the Uber Cup in 1957 and 1960.

What made the sisters choose badminton over tennis?

“I don’t know! I suppose badminton was – father was there, and there was no particular reason. Those days you could play both. It is totally different now where you stick with one. There are things you learn from one racket sport that can pertain to another.

“Sport wasn’t a profession to us. We loved it and it was a pastime, and because we loved it we wanted to be better at it. Judy was more into it that I was. I would never dream in my youth of only playing one sport or another and making a career out of it.”

Sue attributes the Devlin sisters’ success in doubles to the understanding between them. 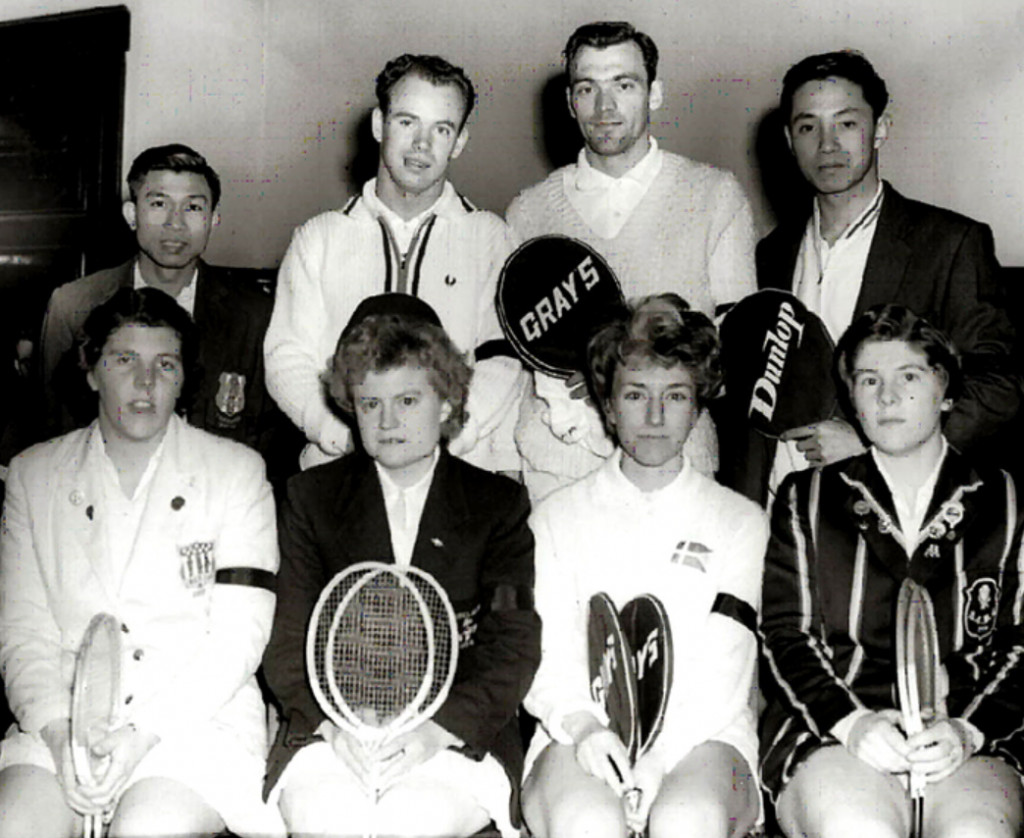 Susan (sitting, far left) and Judy (right) at an exhibition in Scotland.

“We both read the game the same. We practised against two men who were quick on their feet, but didn’t have a powerful smash, it was ideal for us. We didn’t do fitness training, we played whatever sport was going.

“I think you’ve got to enjoy what you are doing. Now, you can read books by various tennis players, what comes to mind is Agassi, who really hated his tennis – his father drove him – and I know there were others. With us, there was none of that, it was general enjoyment and no pressure at home. So if we’d done well, yes, there was a pat on the shoulder, but nothing to say we were brilliant. And when you get better at things, you do enjoy it. Our approach would be, we don’t want to lose this, we want to do all we can. We want to stay there till the bitter end.”

While in the US, Sue, who had a BSc degree in physiology and bacteriology, worked at the John Hopkins University. Following her marriage and relocation to Ireland, she continued to contribute to badminton as player, and later as coach and administrator. She received several honours for her services to badminton, including the Ken Davidson Award from the American Badminton Association, and the Meritorious Service Award from the IBF (now BWF). 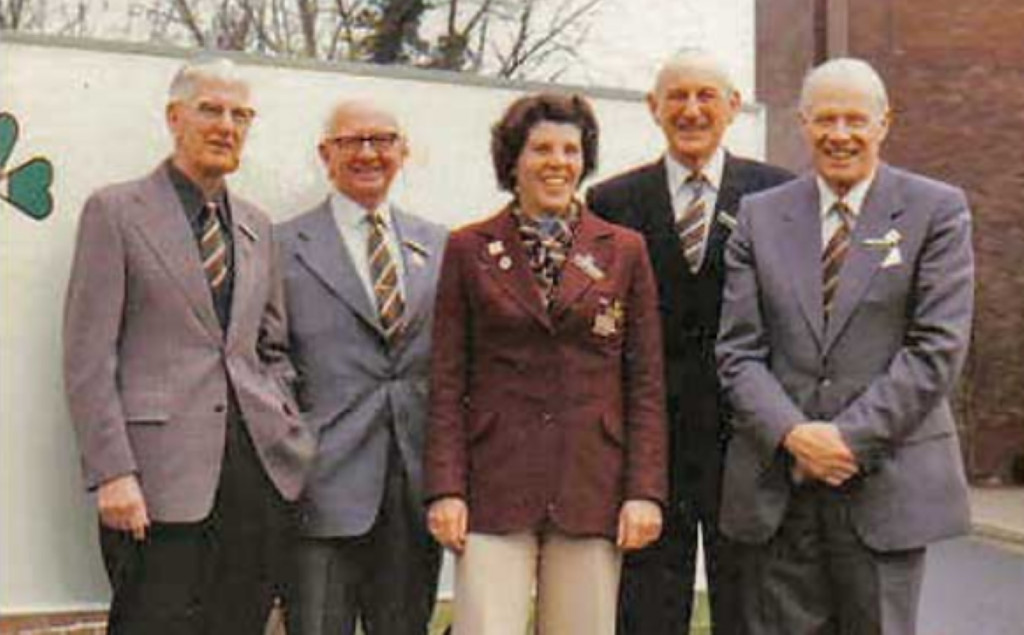 The game has changed almost unrecognisably, and while Sue acknowledges that players have become fitter and faster, she believes the change in equipment from wood to metal came at the cost of one aspect of the game – deception.

“The change from our time to now is the enormous emphasis on fitness and being able to continue running for an hour and a half or longer, and less emphasis on the strokes you might play and the whole working out of how you would get a point. And any sort of deception, which I think is difficult with tightly strung rackets.”

What stands out in her mind on the playing conditions of her days?

The Legacy of Frank Peard