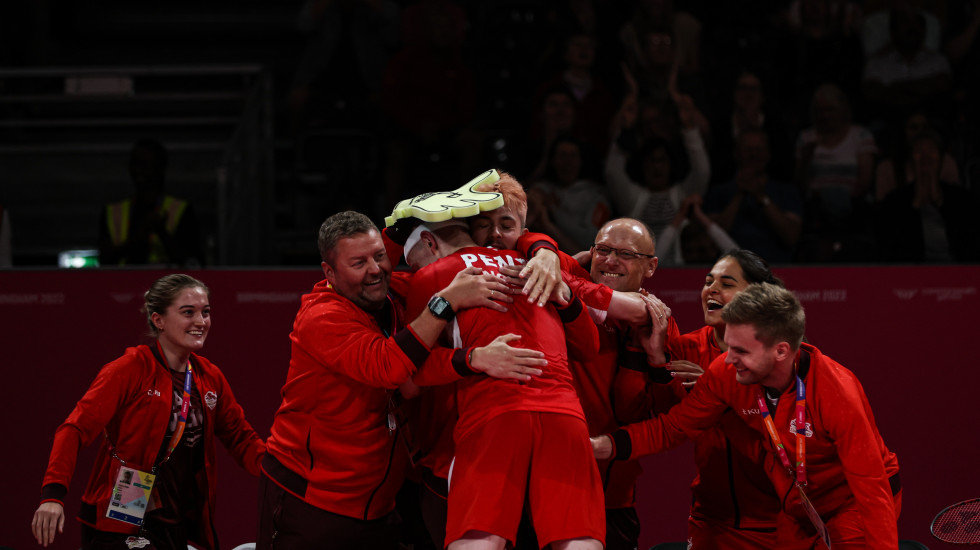 Toby Penty mobbed by the English team after he beat Brian Yang.

England and Singapore will have the chance today to avenge their Gold Coast 2018 semifinal defeats to Malaysia and India respectively after convincing Mixed Team quarterfinal wins last night.

Roared by the home crowd, England made short work of Canada, winning all their matches in straight games to clinch a 3-0 result.

Marcus Ellis and Lauren Smith took to court first to see off Ty Alexander Lindeman/Josephine Wu 21-9 21-12 before world No.55 Toby Penty brought down the higher-ranked Brian Yang 21-19 21-19 to give the hosts a two-point cushion. Men’s pair Sean Vendy and Ben Lane, who have been in great form in Birmingham, then sealed England’s progress with a 21-17 21-12 win over Dong Adam/Nyl Yakura.

In the evening session, Singapore were similarly dominant against the Kirsty Gilmour-led Scotland. The three-time European Championships silver medallist tried her best to force a fourth match after the defeats of mixed pair Adam Hall/Julie Macpherson and men’s singles Callum Smith but Yeo Jia Min prevailed 21-15 12-21 21-11 to confirm her team’s 3-0 victory.

In the 2018 semifinals, a totally different English line-up lost 3-0 to Malaysia while Singapore nicked a point via men’s pair Hee Yong Kai Terry and Danny Bawa Chrisnanta in their 3-1 loss to India.