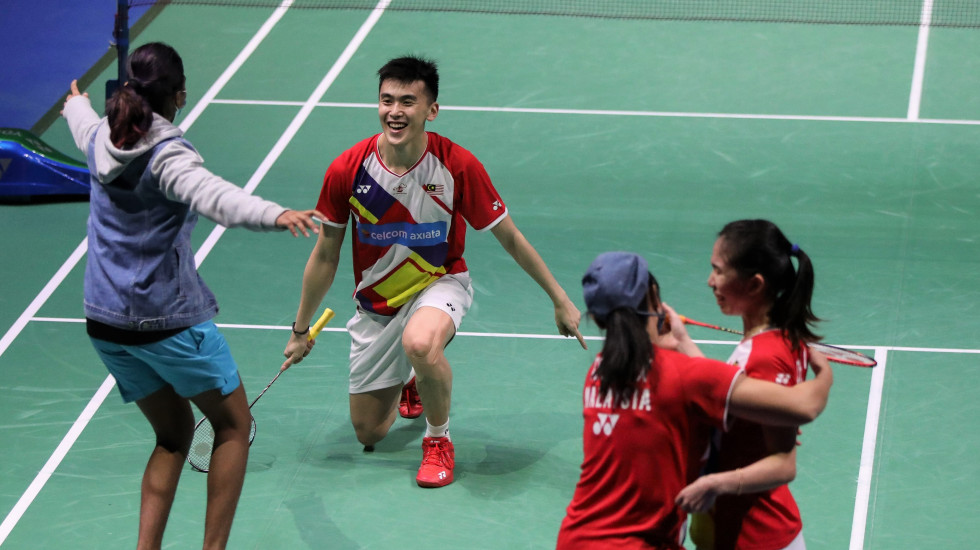 Hoo Pang Ron and Cheah Yee See are hugged by teammates after taking Malaysia through to the semifinals.

Indonesia had the bigger stars but Malaysia took the fight to them. Even the more inexperienced of Malaysia’s competitors showed tremendous resolve; faced with the constant pressure, Indonesia’s big names fell apart. Malaysia are in the semifinals of the Sudirman Cup for the first time since 2009.

Such was Malaysia’s competitiveness on the day that even the two points that Indonesia won – Gregoria Mariska Tunjung in the women’s singles and Olympic champions Greysia Polii/Apriyani Rahayu in the women’s doubles – were earned after draining, marathon battles. 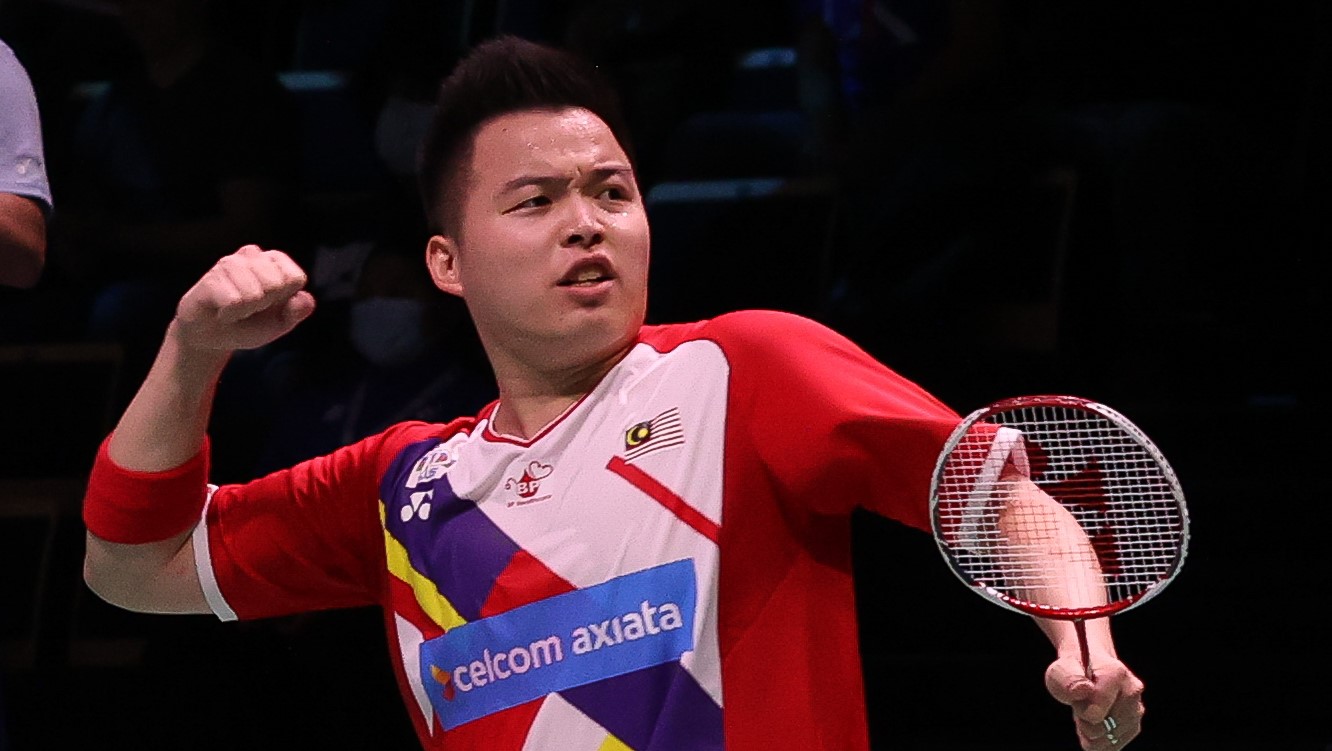 Aaron Chia and Soh Wooi Yik made the breakthrough for Malaysia in the first match.

Malaysia were up and running from the first contest as Marcus Fernaldi Gideon and Kevin Sanjaya Sukamuljo were outgunned by Aaron Chia and Soh Wooi Yik 21-12 21-15, in a near-repeat of their last match at Tokyo 2020.

Kisona Selvaduray, ranked No.53 to Tunjung’s No.21, nearly overcame her higher-ranked and more experienced opponent in a 67-minute match. Tunjung survived a tense ending to bring her team level.

“I’m of course sad that I lost but satisfied that I gave my best,” said Selvaduray.

Lee Zii Jia had lost his three previous encounters to Anthony Sinisuka Ginting but their match had a different complexion today with the All England champion on song, and Ginting struggling to find his spark.

Polii and Rahayu were favourites over Pearly Tan and Thinaah Muralitharan, and yet again the Malaysians showed they weren’t going to be intimidated. Polii and Rahayu were made to fight every inch of the way, and even when they had eight match points, the Malaysians refused to let go. When the Olympic champions did manage, finally, to convert their seventh match point, they came away battered and weary from the effort. “We know the Malaysians were trying their very best. They are one of the great pairs and rising stars. The Olympics gold brought on more expectations from Indonesians, and we want to give back. We are tired mentally, and we just tried to keep up with the training, but it was hard. We just wanted to give our best,” said Polii.

Yet, Malaysia weren’t disheartened by the two narrow losses. Hoo Pang Ron and Cheah Yee See, ranked 23 places below Praveen Jordan and Melati Daeva Oktavianti, played with assurance despite falling behind in the second game. Indeed, it was the Indonesian pair that looked unsure and hesitant, and the Malaysians clinched a famous victory at 21-19 9-21 21-16.

“We are very excited. They were the stronger pair and we were the underdogs, we could go all out. In the second game we lost our focus, but our teammates kept supporting us, and we tried our best,” said Hoo Pang Ron.

“The women’s doubles pair inspired us. They were also lower-ranked, and they went out to do what they could, and we also tried that. We are just so happy.”

Malaysia head coach Wong Choong Hann was all praise for his young squad:

“It’s big win for the youngsters. It’s crazy for us, it’s a long time since we’ve entered the semifinals. Our boys and girls did us proud today, they fought for every point and every game. It’s much more sweeter that we came out as winners.

“I think there’s a long way to go and a lot to be learnt. We will continue to work hard and to take every opportunity. That’s how we can progress and catch up with the best teams of the world. After the loss to Japan we decided as a team to fight for every point and let the course run itself. We will continue to do the same.” 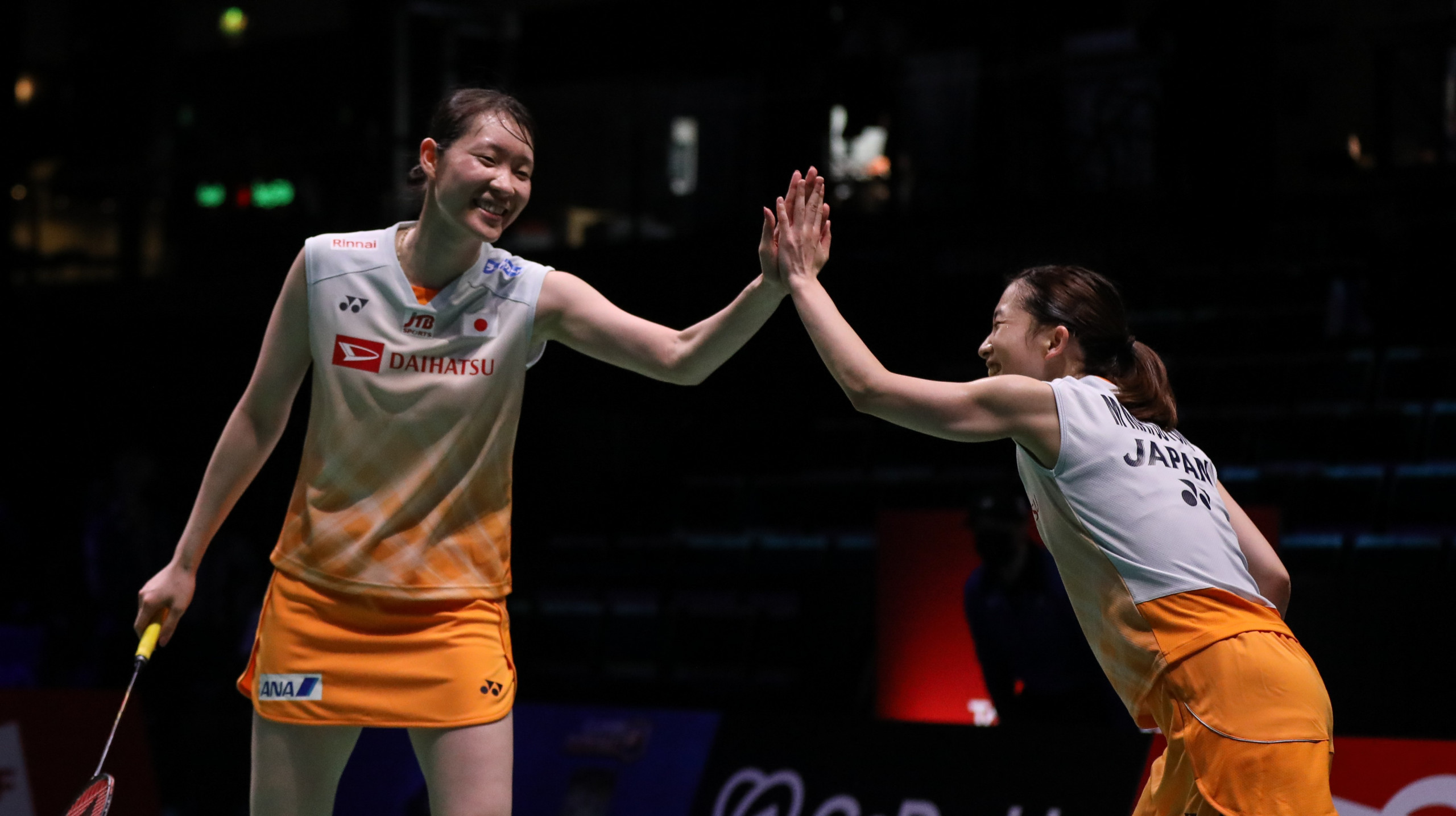 The new combination of Mayu Matsumoto and Misaki Matsutomo saw Japan through.

In the other quarterfinal of the same half, Japan proved too strong for Chinese Taipei, easing through 3-1. The only reverse was in the men’s doubles, with Akira Koga/Taichi Saito falling to Lee Jhe-Huei/Yang Po-Hsuan.