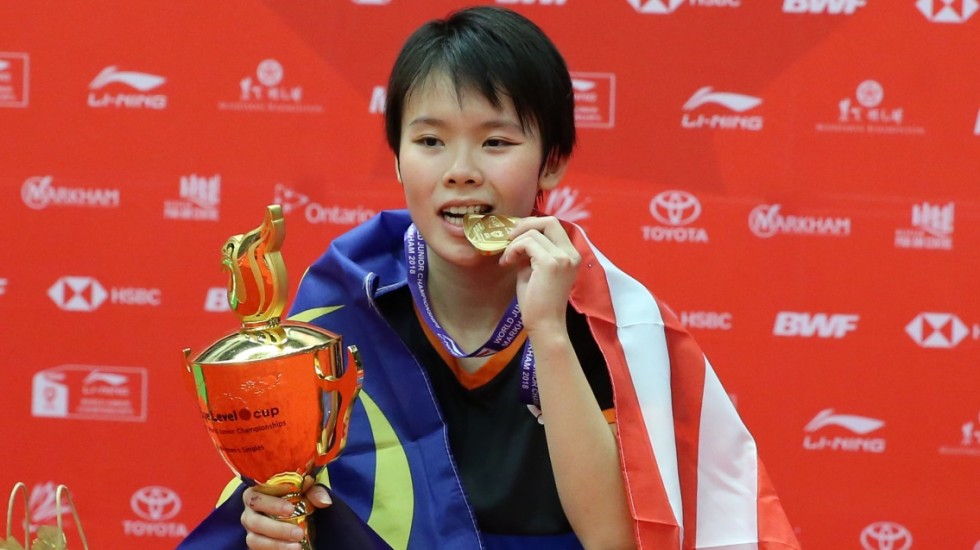 There was light for Goh Jin Wei after she had “cried endless nights” the last two years – the Malaysian regained the title she had last won in 2015, capturing the LI-NING BWF World Junior Championships 2018 today in Markham, Canada.

“I cried endless nights, I think. Then I thought it was important that I worked hard, so I’m happy that I did it. It makes up for the disappointments because this is my final year in the juniors and I’m happy I could end it achieving my goal. It has been an incredible year, and I’m looking forward to the next year because Olympic qualification is beginning soon.”

There was also a second title for Kunlavut Vitidsarn in Men’s Singles. The Thai defended his 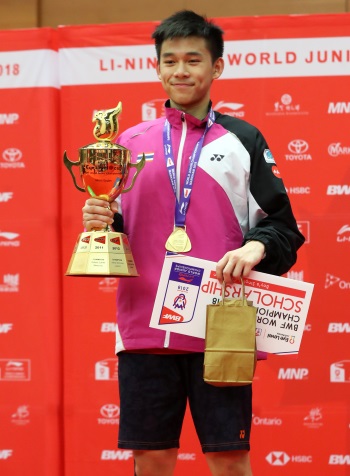 China finished the event with the Men’s Doubles and Women’s Doubles gold medals, and Indonesia pocketed the Mixed Doubles.

Goh buried her demons with a domineering performance over Christophersen, who was bidding to become the first European Women’s Singles winner at the World Junior Championships.

Christophersen started well and stayed with Goh through the early part of the match, but after the mid-game interval it was Goh all the way. The Malaysian’s craft and athleticism were too exacting on the Dane, whose desperation was evident with the match slipping away. Goh completed victory in just 31 minutes.

“I still cannot believe it,” said the champion. “I lost in the team event but I was able to bounce back. Winning the Youth Olympics and this one was completely different. I won’t look back (at the junior level) after this. It was over the moment I stepped off the podium. I’m looking forward to the senior level.”

Vitidsarn went into the Men’s Singles final aware of Kodai Naraoka’s rallying capabilities – the Japanese had dragged his semifinal opponent Li Shifeng into an endless baseline-to-baseline duel. Vitidsarn’s coach Udom promised his player would not allow Naraoka such liberties – he would play a pressing style and force his opportunity.

Vitidsarn executed his strategy perfectly. True to style, Naraoka challenged him to a baseline duel, but the Thai kept clipping the shuttle down, forcing the Japanese to lunge forward and lift. Every so often, Vitidsarn pushed the pace and fired into the openings. It was decisive, opportunistic play – and Vitidsarn gave nothing away in the form of errors. Naraoka was comprehensively outplayed in 43 minutes.

“I’m very happy to have defended my title,” said Vitidsarn. “I knew the pattern I had to play, and it went well. I’m proud that I played well under pressure.” 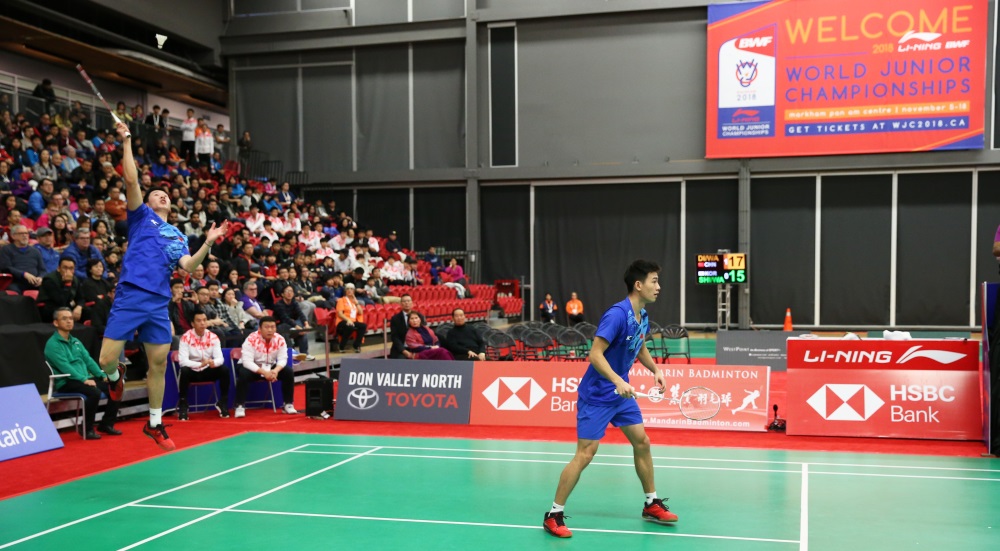 China’s victories in Men’s Doubles and Women’s Doubles were thanks to their greater attacking prowess.

Korea’s Wang Chan and Shin Tae Yang have been exceptional during the Mixed Team and individual championships, but today the tempo of the Men’s Doubles against China’s Di Zijian and Wang Chang was different.

Di and Wang Chang tied down the Koreans, giving them few openings. It was a tight, sticky affair all through, with short rallies and no margins. Wang Chan was in his element to begin with but when he was called twice for service faults, his confidence deserted him. Shin had to step up but with his partner unable to create the same openings that he had in previous matches, the Chinese were able to repel his smashes. On their part, Di Zijian’s own fierce smashes often went unreturned.

Wang Chan regained his confidence late and showed his playmaking ability with some delightful forays; he even flick-served twice to help the Koreans save match points to make it 20-all. The spell could not hold, and Shin finally missed the shuttle and the Chinese celebrated their 21-19 22-20 victory. 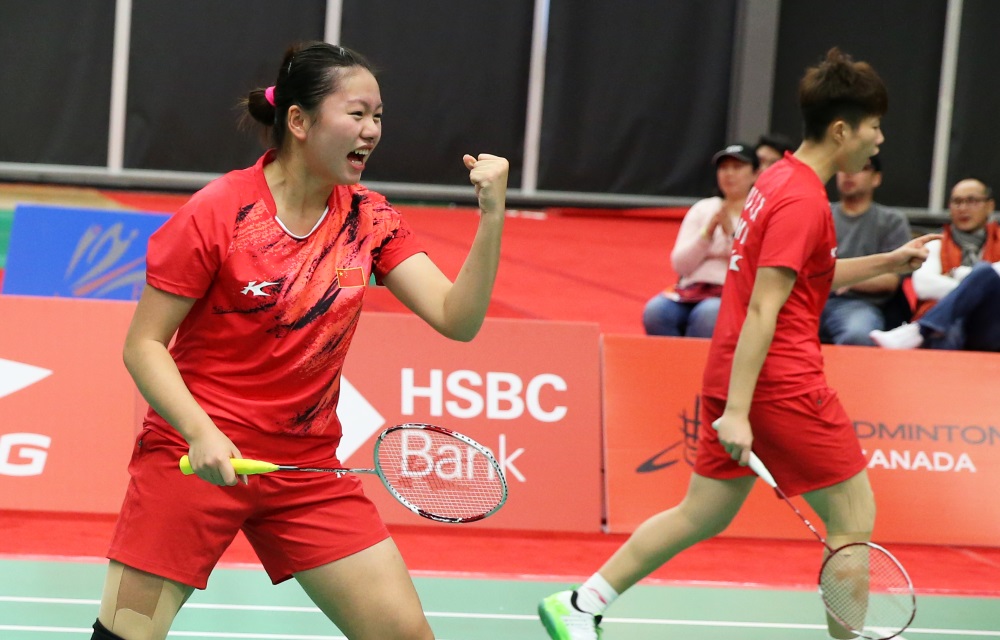 In Women’s Doubles, Xia Yuting and Liu Xuanxuan had all the cards against Malaysia’s Pearly Tan and Toh Ee Wei as they cruised to victory: 21-16 21-16. Xia’s powerful smashes from the back and Liu’s control at the front allowed the Malaysians no window past the dominant Chinese.

It was essentially Jamil’s exceptional interceptions at the front that created all the opportunities for the Carnando. Jamil read her opponents’ shots to perfection, moving early to cut off all the returns, and making it relatively easy for her partner to fire winners. Kusharjanto and Ramadhanti sank deeper and deeper into the mire as they couldn’t change the pattern of their play; they kept Jamil busy at the net, and she gleefully accepted all their offerings. 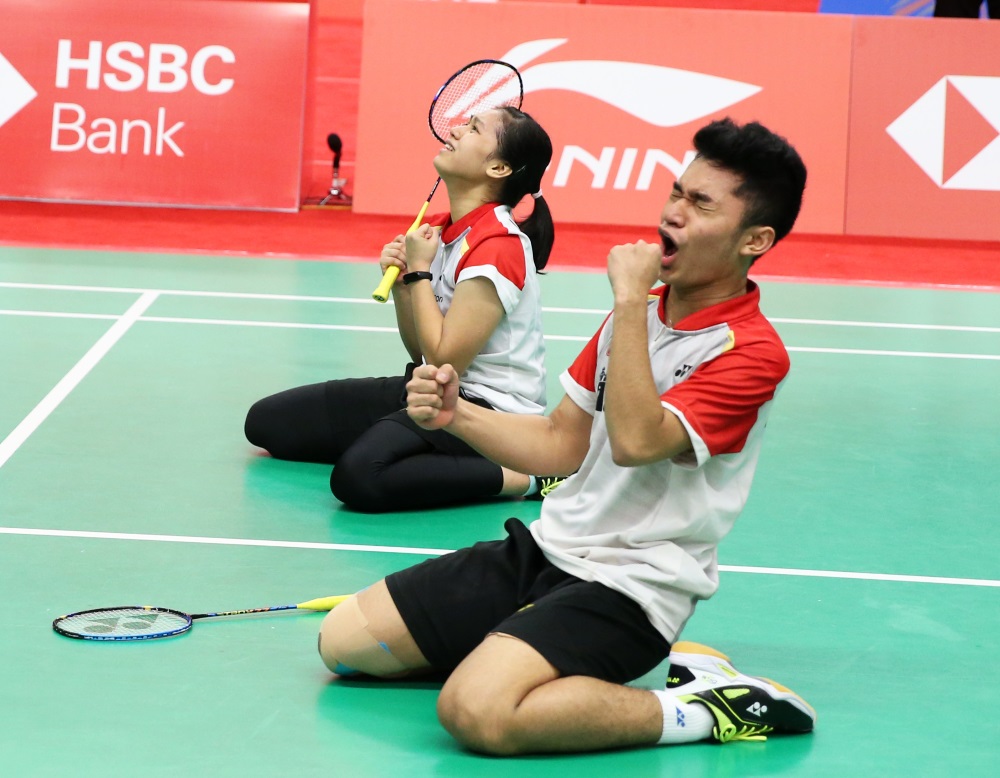 “We didn’t expect it to be easy because they are our seniors and they are very good players,” said Jamil. “I thought we would have a hard match. We have a chemistry because when I play a stroke, he knows how to follow up.”

Her partner added: “We have a certain style, I feel like I click with her. We’ve been together for just two months, although we have been at the same club since 2015.”