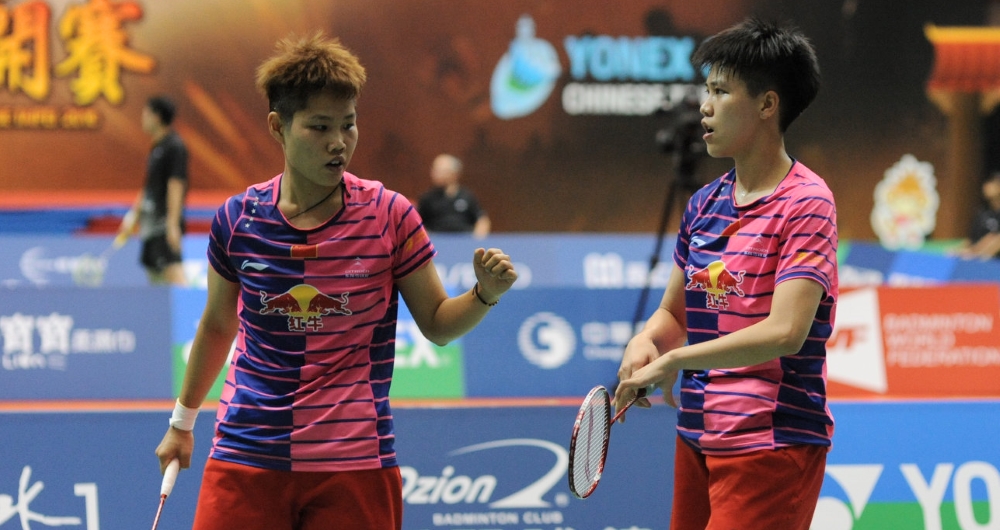 The Thai bounced back from 12-17 down in the second, closing out the match 21-19 21-19 despite some nervous moments at the end, when she netted a serve on her first match point.

“I just wasn’t relaxed at that moment,” Jindapol said. “I haven’t been playing well this year, so this result is a great feeling.”

Sun’s defeat was the only one China suffered all day, as they ensured nine representatives in all five categories for tomorrow’s semi-finals.

The local crowd however was kept happy as singles hopes Chou Tien Chen and Tai Tzu Ying and two Men’s Doubles pairs made it to the semi-finals.

The home favourite’s difficulties with consistency were starkly evident in his match against Wong, who had beaten China’s Tian Houwei yesterday. Chou came to life in phases but turned wayward just as suddenly, giving Wong enough room to take the match with leads of 19-14 and 20-18 in the second. However, the No.5 seed Chou struck form at the right time, bouncing back with a concerted attack to take the match to the third, in which he held the edge for the most part, despite Wong constantly snapping at his heels.

“We’ve played each other many times and we’re familiar with each other’s style,” said Chou. “He knows my weaknesses well, so I couldn’t attack comfortably. My physical training has been good lately and that’s why I didn’t lose my breath in the end.” Asked about his impressive comeback in the second, Chou said it had been a do-or-die situation: “The audience was screaming for me, I just wanted to show I was persevering and left the rest to fate. Nothing else was in my hands. In the end it’s about perseverance and psychology, and I turned out to be the lucky one.”

Chou can expect a doughty semi-final challenge, in the form of Iskandar Zainuddin Zulkarnain. The Malaysian was dominant over Thailand’s Khosit Phetpradab, 21-17 21-18. Zulkarnain had a handy 17-7 lead in the first, only to see the Thai coming to within two points before he shut the door in time. The pattern reversed in the second, with Zulkarnain catching up from a deficit and going on to take the match.

“I was a bit tired today because of yesterday’s tough match,” said Zainuddin. “In the first game I had a lot of trouble controlling the shuttle as the wind here is very strong, so it’s a little hard to predict it. He had the same problem in the second game and lost focus due to the drift.”

The other semi-final will see Thailand’s Tanongsak Saensomboonsuk take on China’s Qiao Bin. Saensomboonsuk was a three-game victor over Hong Kong’s Wei Nan, while Qiao had it relatively easy against Chinese Taipei’s Lin Yu Hsien, 21-11 21-18. Jindapol will be up against the crowd tomorrow as she faces local heartthrob Tai Tzu Ying, a 21-9 21-12 winner over Malaysia’s Ho Yen Mei; the other semi-final pits top seed Wang Shixian against Chinese compatriot He Bingjiao, who overcame a first game hiccup to power past Thailand’s Pornpawee Chochuwong. Chen Qingchen, like Zheng Siwei, could barely do a thing wrong on the day. Partnering Jia Yifan, the Chinese duo joined compatriots Luo Ying/Luo Yu and Huang Dongping/Zhong Qianxin (featured image) in the last four. While Chen/Jia and the Luo twins were through in straight games, Huang/Zhong had to struggle a bit harder, against Indonesia’s Tiara Rosalia Nuraidah/Rizki Amelia Pradipta, chalking up a 21-10 16-21 21-17 victory.