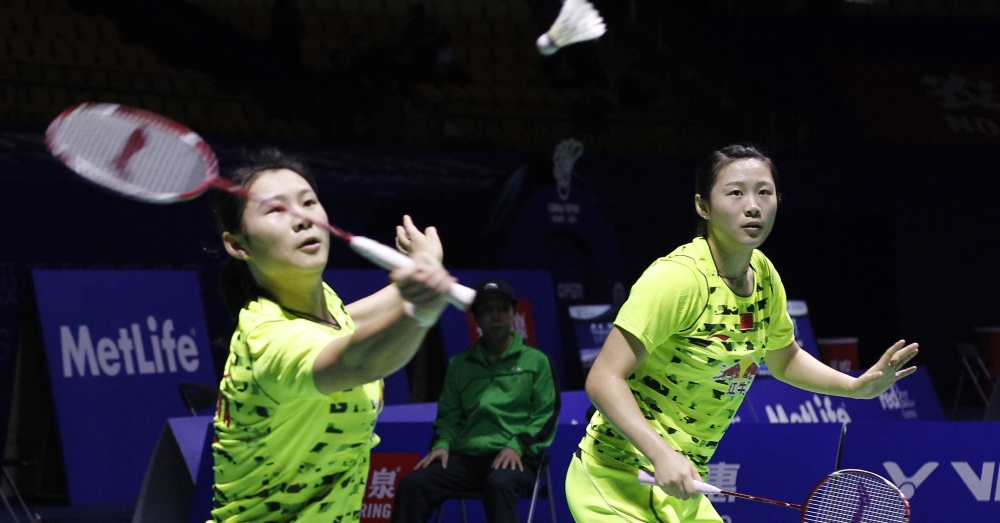 This was the year of experimentation, when several top pairings from Korea and China were rejigged to test the best combinations.

By the end of the year, with the Olympics in sight, the experimentation had given way to stability.

The standout pair of 2014 – Tian Qing/Zhao Yunlei – spent most of the year with different partners. After starting together at the Yonex All England, Tian was paired with Xia Huan and Tang Jinhua, while Zhao was taken off Women’s Doubles duty and focussed exclusively on Mixed Doubles until August.

Rather remarkably, Tian and Zhao recombined at the TOTAL BWF World Championships and emerged triumphant. Immediately thereafter, Zhao paired up with junior compatriot Zhong Qianxin – and in a result that proved she is the best contemporary woman doubles player – claimed the Yonex Open Japan beating the likes of Tian Qing/Tang Jinhua and Denmark’s Christinna Pedersen/Kamilla Rytter Juhl.

The Tian/Zhao express was back on track in October at the Yonex Denmark Open (they conceded a walkover to Korea’s Jung Kyung Eun/Shin Seung Chan, one of only two Superseries won by a non-Chinese pair this year). The World champions went on to retain their title in Hong Kong, before a knee injury to Zhao in Dubai meant that they could not challenge for the prestigious year-end event. Tian herself was quite successful with Tang Jinhua, falling in the final of The Star Australian Open to compatriots Ma Jin/Tang Yuanting and reversing that result a week later in Indonesia in the semi-finals. Tian/Tang then withstood the noisy cheerleading from the packed crowd to prevail over local hopefuls Greysia Polii/Nitya Krishinda Maheswari to claim the BCA Indonesia Open.

While China had their challenges in other categories, they continued to maintain a vice-like grip over Women’s Doubles. Despite experimenting with various combinations, they still finished with 11 of the 13 Superseries. They started the year well, with Bao Yixin/Tang Yuanting winning the Yonex All England. Following a win for the pair in the Swiss Open, Bao was briefly reunited with Tang Jinhua, the partnership that had such a brilliant run last year.

The biggest sign of encouragement for China was the emergence of Tang Yuanting. The young Chinese big-hitter was variously paired with Bao Yixin, Ma Jin (they won the Australian Open) and finally Yu Yang, with whom she won the China Open and made the final in Hong Kong. The 21-year-old picked up three Superseries titles and will be the player to watch in 2016.

But while the attention was on the likes of Zhao and Tang Yuanting, it was the Luo Ying/Luo Yu (featured image) pair that climbed to the top of the BWF rankings at the end of the year. The Luo twins won their first Superseries in Malaysia, but had to wait over seven months for their next Superseries crown, which came at the World Superseries Finals in Dubai.

Korea’s pairs performed creditably. Jung Kyung Eun, who was with Kim Ha Na at the end of 2014, was briefly with Chae Yoo Jung in January before partnering Chang Ye Na. The two started well, finishing runners-up in Malaysia, but some early losses that followed forced a recombination. Jung was paired with Shin Seung Chan in Japan and the duo struck gold a month later at the Yonex Denmark Open. The spell continued into the Yonex French Open final, where they were stopped by China’s Tang Jinhua/Huang Yaqiong. Chang Ye Na, partnering Lee So Hee, had a strong run in the latter half of the year, their best being runners-up on home turf at the Victor Korea Open. The other Korean pair that impressed was Go Ah Ra/Yoo Hae Won.

The only other pair, apart from Jung/Shin, to win a Superseries title this year was Greysia Polii/Nitya Krishinda Maheswari. The Indonesians went on to upset Tian/Zhao at the Dubai World Superseries Finals, which marks them out as medal contenders for the Olympics. The duo was unlucky not to not end up atop the podium as they fell in two finals, apart from the title round of the World Championships.

Selena Piek/Eefje Muskens (Netherlands) too had some performances to be proud of, which helped them qualify to the Dubai World Superseries Finals. Japan’s Misaki Matsutomo/Ayaka Takahashi, despite being ranked No.1 through most of the year, could not quite capitalise on the high of finishing last year with the Dubai title. The Japanese had a solitary Superseries victory, in India, and finished runners-up in Singapore (to China’s Ou Dongni/Yu Xiaohan) and China (to Tang Yuanting/Yu Yang). Matsutomo and Takahashi had company in the form of compatriots Kurumi Yonao/Naoko Fukuman. The young Japenese pair achieved a career-high ranking of No.8 on the back of some solid performances, including a semi-final finishes at the World Championships and in Hong Kong.

While China continue to hold the aces heading into 2016, there are a few pairs that can upset them at the big events coming up.