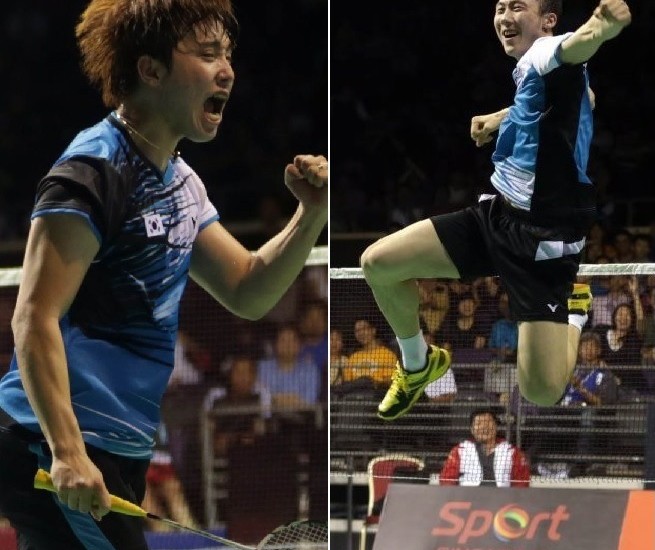 and world’s No. 1 Men’s Doubles pair.

Playing catch-up after dropping the first game, Indonesia’s stellar duo of Mohammad Ahsan and Hendra Setiawan (below) – the event’s defending champions – looked to have regained control of the situation when they went ahead 11-9 in the decisive third game. However, as their scoring flatlined, they saw the Koreans (BWF home page) surge past to grab the ascendancy at 18-13 and, despite a late burst from the World champions, hold on for a famous win! Korea had more reason for rejoicing in the same category as the in-form Ko Sung Hyun and his partner, Chin Baek Choel, were gifted a walkover into the semi-finals by China’s Chai Baio/Hong Wei. Given the draw, it could well be an all-Korea battle for the title on Sunday afternoon.

If that turns out to be the case, Yoo Yeon Seong will be looking for some revenge after he and Jang Ye Na were ousted by their compatriots Ko and Kim Ha Na in Mixed Doubles today, 18-21 21-16 21-15. Though pulling ahead 13-9 in the second game, Yoo/Jang could not complete the mission in straight games and ultimately it proved to be their undoing. In another all-Korea battle, Sung Ji Hyun easily dispatched her Women’s Singles counterpart, Bae Yeon Ju, 21-12 21-9, to move into the last four.

Sung faces China’s Li Xuerui who put aside the scare of her previous match to rout Tai Tzu Ying of Chinese Taipei, 21-10 21-13, in impressive fashion. Another Chinese player, Han Li, also created a stir by beating World champion, Ratchanok Intanon, comprehensively, 21-14 21-12. Meanwhile, the third Chinese in the mix and defending champion – Wang Yihan (above) – earned a 21-19 21-15 verdict over PV Sindhu of India. Fans at the Singapore Indoor Stadium were also treated to a marathon Women’s Doubles cliffhanger in which the No. 3 seeds, Misaki Matsutomo/Ayaka Takahashi (left) ground out a victory versus Suci Rizky Andini/Tiara Rosalia Nuraidah of Indonesia. The first game stretched to ‘sudden death’ and the Japanese took it 30-29 but their rivals evened the score in the second game. Another see-saw tussle ensued in the third, with Matsutomo/Takahashi finally squeezing home (30-29 18-21 22-20) after 91 minutes on court.

overcoming Hong Kong’s Hu Yun, 17-21 21-14 21-19, to reach his first World Superseries semi-final. For his efforts, he now gets a crack at top gun, Lee Chong Wei of Malaysia. The latter sped past Thailand’s Tanongsak Saensomboonsuk, 21-8 21-14, as he zeroed in on yet another championship. The other semi-final pits China’s Du Pengyu against a rejuvenated Simon Santoso of Indonesia.

* Riky Widianto/Puspita Richi Dili profited from China’s second walkover of the day as Mixed Doubles No. 2 seeds, Xu Chen/Ma Jin, cut short their campaign. The Indonesians (seeded No. 8) must find a way past Ko/Kim of Korea if they are to feature in the final. Their team-mates and current title holders, Tontowi Ahmad and Liliyana Natsir, tackle Liu Cheng/Bao Yixin (below) in the other semi-final.

* Bao Yixin will be busy tomorrow, also trying to book a place in the Women’s Doubles final. In what is already a lucrative partnership, she and Tang Jinhua, have snapped up eight titles in the ten tournaments in which they have played together. The No. 2 seeds remain on course for a ninth success in their tenth outing, having beaten Nitya Krishinda Maheswari/Greysia Polii of Indonesia, 22-20 22-20. They face their Chinese team-mates, Luo Ying and Luo Yu, for a spot in Sunday’s showdown.