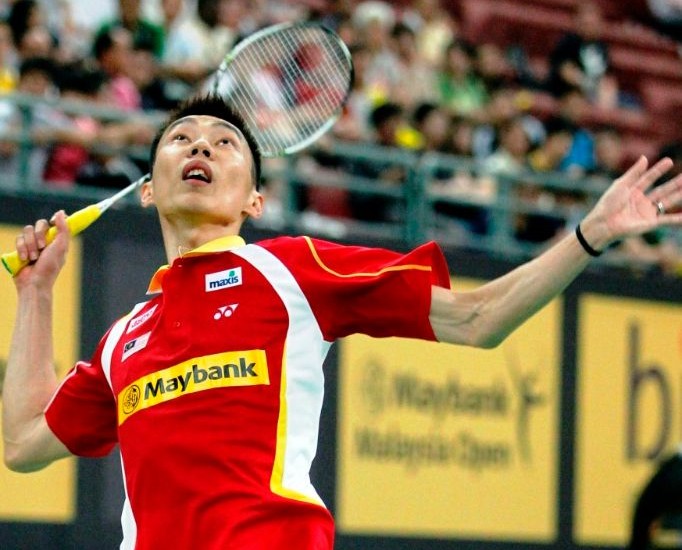 Hong Kong’s Hu is world No. 6, but Malaysia’s Lee made him look like an amateur. Such was the gulf in class that Hu appeared leaden-footed throughout as Lee toyed with him during the 25-minute encounter at Putra Stadium. Hu was left scratching his head in despair as near-perfect Lee won 21-12 21-9. It was an emphatic statement from a player at the top of his game as Lee seeks his ninth crown in front adoring home fans.

Lee (BWF home page) will take on Denmark’s Jan O Jorgensen who overcame an inconsistent challenge from Malaysia’s other hope Liew Daren in three games, 19-21 21-13 21-17. In the other semi-final, Sony Dwi Kuncoro (Indonesia, 8) will be challenged by Kenichi Tago (Japan, 2).

Liew had only himself to blame for blowing his opportunities against Jorgensen. The Malaysian left Jorgensen searching for answers in the first game; his jump smash in particular catching Jorgensen off-guard repeatedly. Although Jorgensen had a 17-12 lead at one stage, thanks to some unforced errors from Liew, the Malaysian steadied himself and went ahead by a game.

The Dane fought his way back, helped by a generous Liew, who was too wayward during crucial moments. As the match progressed, Jorgensen began to read his rival’s smashes better and emerged triumphant during the rallies. He eventually closed out the match in just over an hour.

In Women’s Singles, top seed Saina Nehwal won in unusual fashion, 21-11 14-21 2-0 retired. She demolished world junior champion Nozomi Okuhara’s challenge in the first game, but a short break before the second game – due to the lights over the court going off – helped Okuhara turn around fortunes dramatically. Nehwal looked a shadow of herself, hitting the shuttle all over the place However, towards the end of that game, Okuhara appeared to hurt her knee and she retired early in the third game. Nehwal plays Chinese Taipei teenager Tai Tzu Ying who got the better of third seed Tine Baun (Denmark) 22-20 21-15. In the other semi-final, Korea’s Bae Yeon Ju (top left) plays Chinese qualifier Yao Xue.