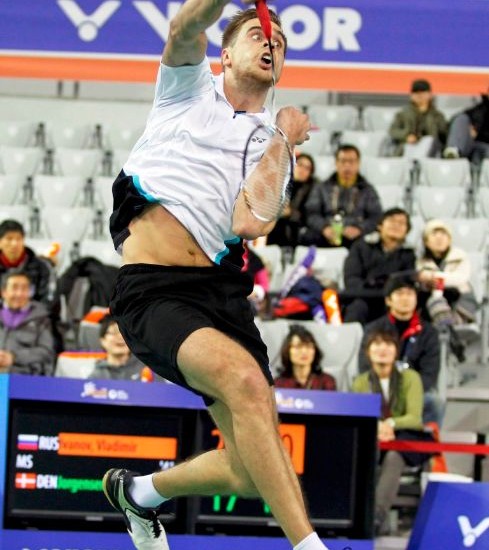 Ivanov – one of the tallest players on the circuit at six-feet, four inches – had a 0-3 head-to-head record going into his second round Men’s Singles match against Denmark’s Jorgensen. However, he turned it around this time, keeping his composure in the last stages of a tense second game. Jorgensen saved one match point but could not prevent the Russian from converting the second, as he triumphed 21-17 22-20 to advance to the quarter-finals. There were two upsets in the Women’s Singles. Germany’s Juliane Schenk (4), a frequent semi-finalist and finalist at several Superseries tournaments last year, was surprised 21-19 21-8 by young Thai Nichaon Jindapon, while seventh seed Jiang Yanjiao of China was also shut out in straight games, by Sung Ji Hyun (Korea) 21-10 21-17. The only two seeds in the quarter-finals are Saina Nehwal (India, 3) and Wang Shixian (China, 5). • Chris Adcock and Gabrielle White (England; at left), who renewed their combination after a long stint with other partners, scored an impressive victory over eighth seeds Robert Mateusiak/Nadiezda Zieba (Poland) in the Mixed Doubles second round.  The 20-22 21-19 21-15 win took an hour and 14 minutes, and gives them an appointment with top seeds Xu Chen/Ma Jin.

• The pair to watch in the Men’s Doubles quarter-finals might be the young Chinese duo and Thailand Open GPG winners Liu Xiaolong/Qiu Zihan. However, they run into Koo Kien Keat/Tan Boon Heong (Malaysia) against whom they have a 0-5 record.