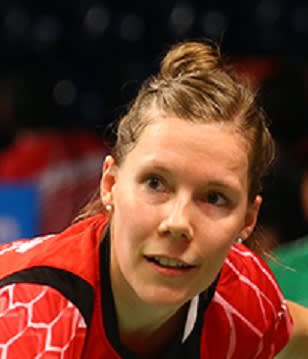 Professional Since: In 2000, I started representing my club to compete in the regional league.

When and where you began playing, and why this sport?
"In 1998, I began to play badminton in my home city, La Chaux-de-Fonds, Switzerland. One of my sisters was playing at that time and I just followed her because it was fun, and then I caught the "virus"! I really enjoy the life on tour as a badminton player, and I like to push myself in training, having a goal in my mind. I'm really privileged to be able to go on court every single day and do what I really like!"

Your training regime?
"10 sessions a week, 2 each day. 7 sessions of badminton techniques, 2 sessions of strength and conditioning, 1 physical training session."

Memorable sporting achievements?
"Bronze medalist at the European Championships 2017, qualification for the two last editions of the summer Olympic Games (London 2012 and Rio 2016)."

Sporting ambitions?
"To enjoy playing my best badminton on court and have great results then!"