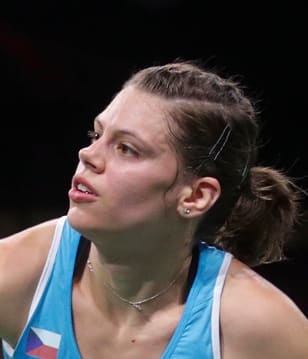 Professional Since: In 2002, I played my first international tournament at the age of 14.

When and where you began playing, and why this sport?
"I started playing when I was 4 or 5 in my dad's club in Trencin, Slovakia. My mum and dad has also played badminton and therefore, naturally, I also wanted to play. We are a badminton family! Currently I enjoy the sport because I like to have an aim or a goal to work towards, and to be dedicated to something that can seem out of reach - but if you work hard for it, it will come to you. It is a big satisfaction to achieve something that you have been working hard on. This way of life, where I can focus on something until I achieve it, and then make new goals, is the best thing about being a professional badminton player."

Sporting awards / Honours (so far)?
"I have been Female Player of the Year many times in Czech and also been awarded the Achievement of the Year."

Sporting ambitions?
"I have both short and long term goals. But in general, I want to work hard on being the best I can."