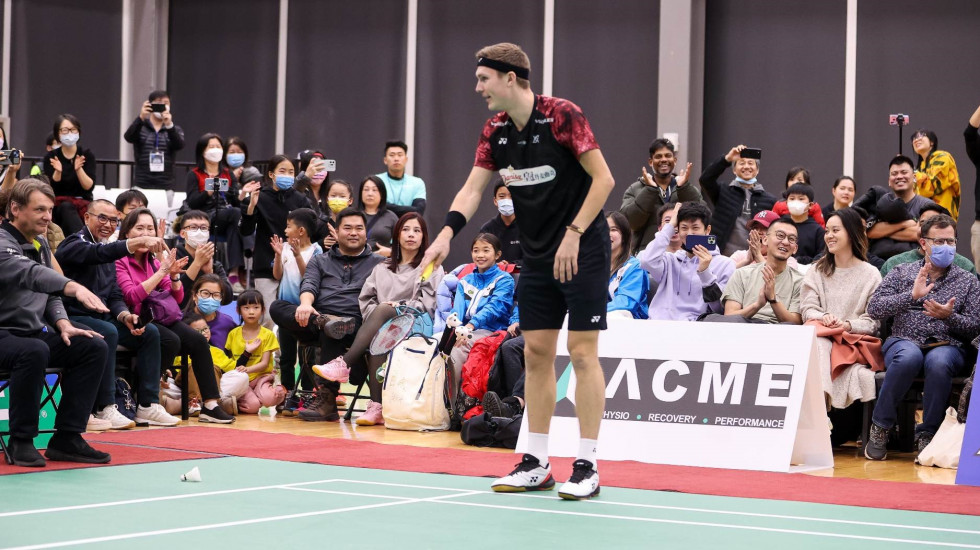 Despite badminton being the global sport that it is today, fans in some parts of the world don’t get to appreciate in person the speed and dexterity of world class players often. Fans in North America, for instance, unless fortunate enough to live in cities such as Calgary where the yearly Canada Open is held, have to travel overseas to see top 10 players in action.

With the cancellation of the Hong Kong and China Opens due to COVID-19, a rare window of opportunity opened for the recent Viktor Axelsen North American Tour held in one US and two Canadian cities, namely Bellevue (Seattle, November 19), Richmond (Vancouver, November 18) and Markham (Toronto, November 22). The clubs involved in hosting him were ClearOne, Lee’s Badminton and Bellevue Badminton Club.

These cities, populated with a high percentage of citizens of Asian descent combined with numerous well-organised badminton clubs, were natural choices to host a North American tour for Axelsen, the current world and Olympic champion. 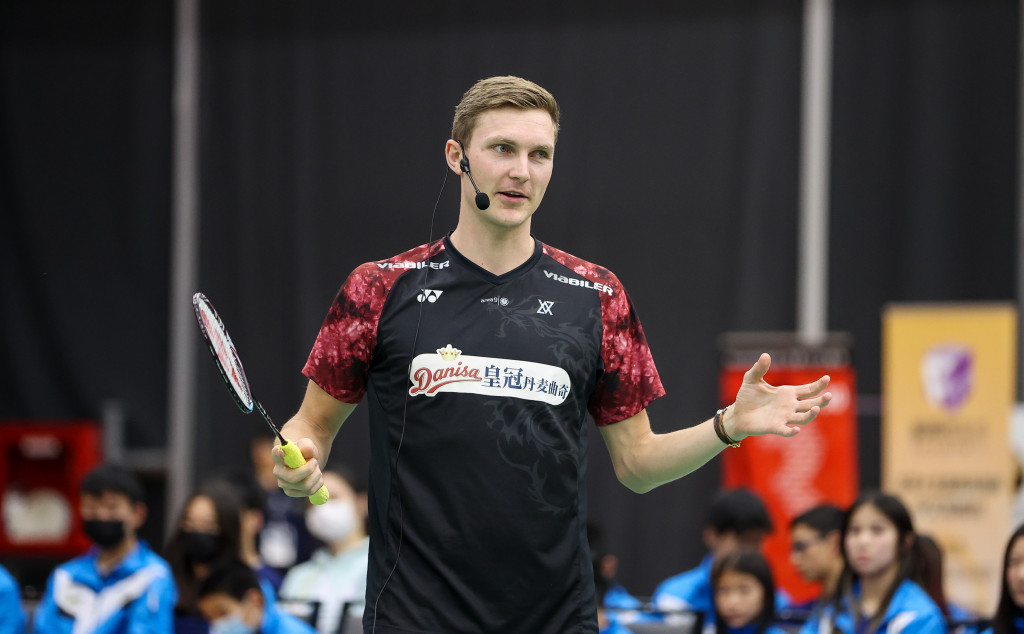 Markham is a well-known hotspot for Canadian badminton, having produced players such as Michelle Li and rising star Rachel Chan. It is not the first time that Markham badminton aficionados have been honored by great players. Former world No.1 Peter Gade treated fans to similar tours in 2014 and then in 2015 with Tommy Sugiarto.

This time, Viktor Axelsen was joined by Hong Kong China’s Wong Wing Ki Vincent and Canada’s Brian Yang and Talia Ng to put on a show of world class badminton. Such was the interest that players from one club, Université Laval, made the trip from as far as Québec City, some 800 kilometers away.

Early comers, mostly composed of club players, arrived at the Markham Pan Am Center on a chilly but bright and sunny afternoon for a full hour of tips from both Axelsen and Wong. With the help of Brian Yang, Canada’s highest ranked men’s singles player, both players shared their knowledge of various routines and tips to improve while challenging participants to put things into practice immediately on the court.

Time passed quickly for the players and the evening led into the highlight of the tour – the exhibition matches. One could sense the anticipation in the venue as the 500-strong crowd waited in line and purchased event memorabilia before taking their seats to see the tall Dane in person, most of them for the first time in their lives. 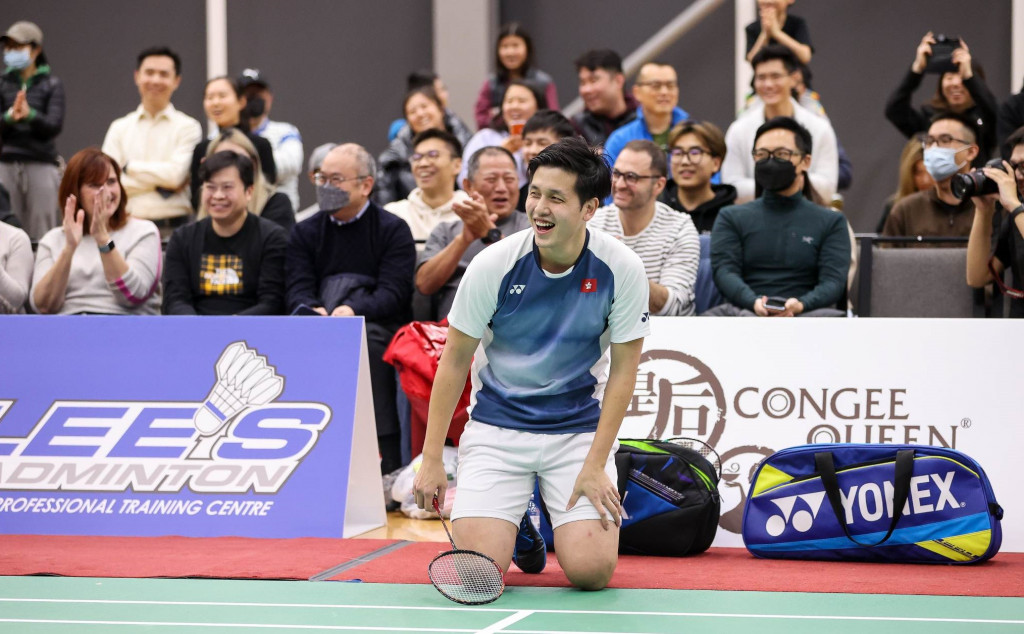 And the crowd was not disappointed. Viktor could not have asked for a better partner than Wong Wing Ki to put smiles on the faces of everyone present. Both players proved to be top entertainers, as much for their technical talent as for their comical skills. The crowd was thrilled to witness the playful and flamboyant side of the two showmen.

Yang, hailing from Richmond Hill, a city next door to Markham, once again made an appearance on court to showcase Canadian talent. Discreetly watching from the stands were the previously mentioned Michelle Li, and Chan Tsz Ka, former Hong Kong China player recording her husband Wong’s delightful mix of combativeness and clowning around.

To spice things up, another rising Canadian female singles player, Talia Ng, was invited to challenge Axelsen and Wong.  Taking turns, Ng and other young club players, some shorter than the net, tried their best against the international stars in single rallies. Much to the amusement of the crowd and maybe helped a little bit by the two greats, some of the youngsters even managed to score points! 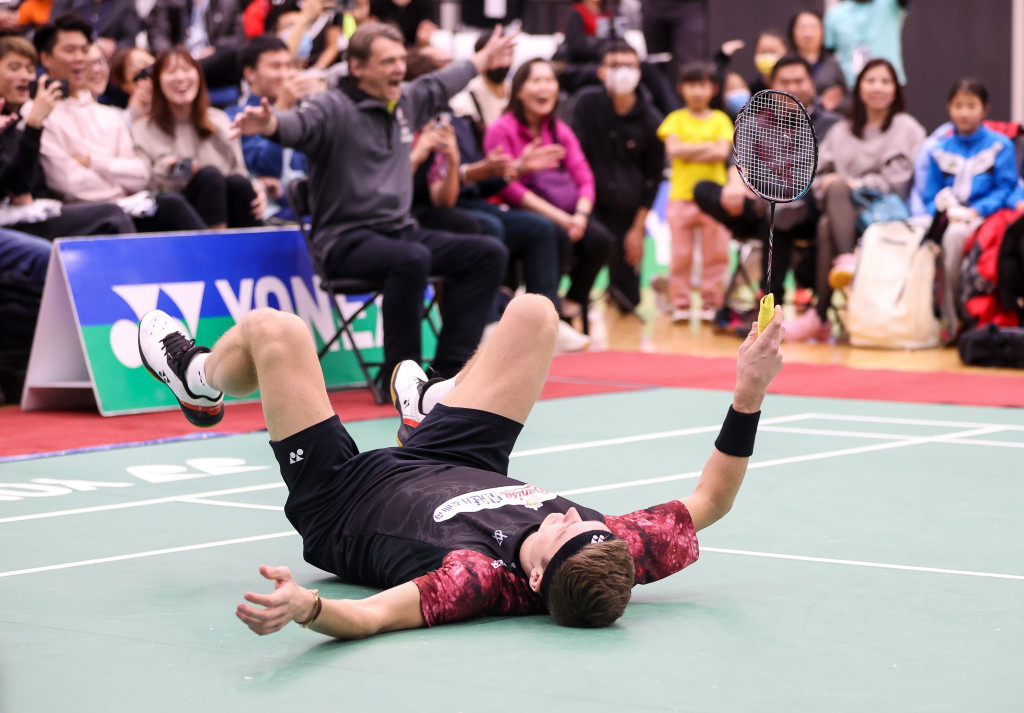 Livening it up for the audience.

For nearly two hours, smiles adorned all the faces of the spectators at the Pan Am Center, admiring and vocally approving of Viktor’s backhand prowess and attacking skills. During breaks and after the matches, excited kids were on the chase for autographs and spectators were hoping to hold the winning ticket to prizes such as autographed T-shirts and rackets.

Those who did not win a prize nevertheless left the venue with priceless memories of the evening recorded on their countless mobile phones and undoubtedly shared on various social media platforms.

North American badminton fans who can’t wait for the return of world class badminton to their continent will make sure to attend next year’s Canada Open, now promoted to the World Tour Super 500 level at the start of the Olympic qualifying period. The event, to be held in Calgary, will undoubtedly be the most star-studded tournament in the region since the 2005 World Championships held in southern California.