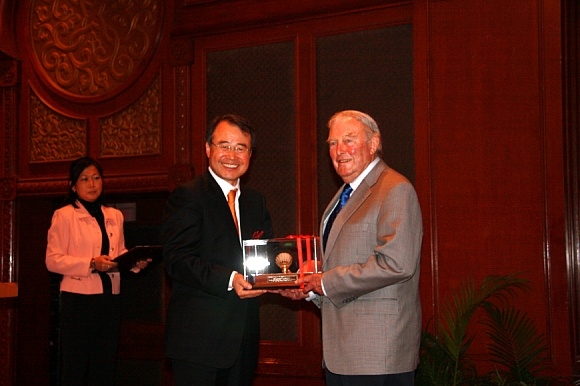 BWF Honorary Life Vice President Jeffrey Robson, who had a distinguished career as a badminton administrator and player, passed away in Auckland on Monday aged 95.

In his playing days, he was one of the few to have represented his country at the highest level in both badminton and tennis.

Jeff Robson during his playing days.

He allied speed, deception and talent with a fierce determination to become one of the best players New Zealand has produced at either sport, becoming one of only three people in the world to have represented their country in both Thomas Cup badminton and Davis Cup tennis.

Had there been world rankings in his playing days, Robson would have easily been a top six player in badminton and as a tennis player he was good enough to reach the last 16 at Wimbledon at his first attempt out of four visits. He also reached the last 16 of the mixed doubles with his wife, Heather, in 1957.

In badminton, Jeff Robson won a record nine New Zealand singles titles at badminton between 1948 and1960; besides seven doubles and five mixed titles.

He played 12 times for New Zealand in the Whyte Trophy and competed in five Thomas Cups.

His other badminton successes include Scottish and Irish Open titles in 1954 to add to his title treble at the 1950 Australian Open. He also reached the semifinals at the first World Invitation event at Glasgow’s Kelvin Hall, only losing to the great Eddy Choong but not before taking him to three games.

At tennis, between 1946-64, he won three New Zealand singles, seven doubles and two mixed doubles titles and was Captain of the Davis Cup team for 10 years as well as becoming New Zealand’s longest serving player in the Cup over 17 years.

A victory over the great Australian player, Roy Emerson, who won all four Majors more than once (six Australian and two apiece at Wimbledon, French and US Opens) illustrates how good a tennis player Robson was.

But Robson’s sporting career didn’t end with retirement from playing. In badminton he became a highly regarded BWF Certificated Referee, bringing all his knowledge of the game, its rules and regulations and using his experience as a top player and team manager.

As an administrator he was elected to the IBF Council in 1979-80, became a Vice President in 1989 and during 25 years of service he also served on the Executive Board and as Chair of the Events Committee,

He was also Deputy Chair of Council for both Lu Shengrong and Korn Thapparansi during their Presidencies.

He retired from office in 2004 but a year later was made an Honorary Live Vice President.

By then, the accolades and honours had flooded in. He was made an MBE in the 1976 New Year’s Honours List along with another New Zealand sporting great in speedway star, Ivan Mauger.

In 2009 he received the Herbert Scheele Award from BWF President Dr Kang Young Joong for outstanding service to the sport.

He and his wife have been a rare double act. First he was President of the New Zealand Badminton Federation. Then she became only the second woman to be President. Jeff’s father, MA Robson, had been Vice-President from 1962-65, then President from 1965-67. Heather also served as President of the Oceania Badminton Confederation and the Auckland Badminton Association while Jeff was one of the OBC delegates.

In Auckland Jeff was heavily involved in the building of a badminton hall and a tennis stadium and was chairman of the committee for the first Open tennis tournament at this new Stanley Street venue before it became the Heineken Open.

At the 1994 Commonwealth Games in Victoria, Canada, he was IBF technical delegate and fulfilled the same role four years later in Kuala Lumpur, having been Commissioner for Badminton at the 1990 Games in his home city of Auckland.

For 12 years he was chairman of the IBF’s International Championships and Tournament Committee and for five years Chair of the Technical Committee.

With all his involvement in badminton and tennis it is amazing that Dr Robson had time for his day job as a dentist, but that came in particularly useful on one occasion when IBF General Secretary Ronnie Rowan had a problem and needed to consult him for treatment!