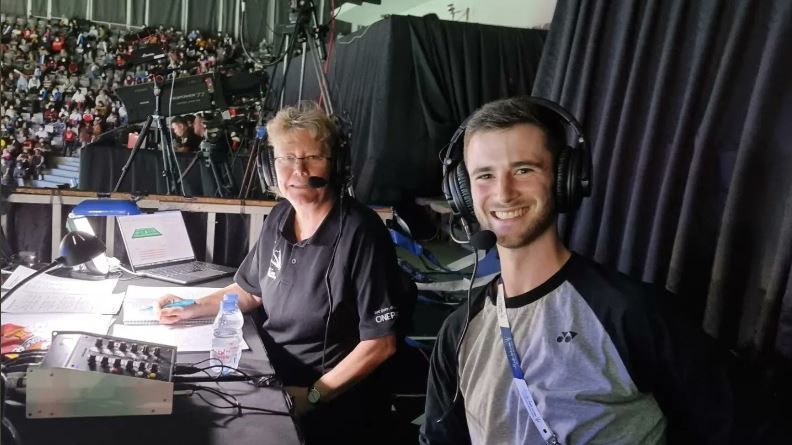 In his first-ever gig as a commentator at the Indonesia Open 2022, Scotsman Adam Hall revealed to BWF how sitting aside the voice of badminton, ticked off a huge badminton bucket list for his.

“I received a phone call about commentating on a men’s double match about six hours before the match. My only homework from Gill (Clark) was how to say Sukamuljo correctly. I could not have been more excited beforehand,” exclaimed Hall.

A commentator’s job is to offer further details, insider knowledge, and, unsurprisingly, comments about current events to fans to enhance their viewer experience. Hall was brought on board to add an element of colour and player insight, drawing on his own experiences as a current player. 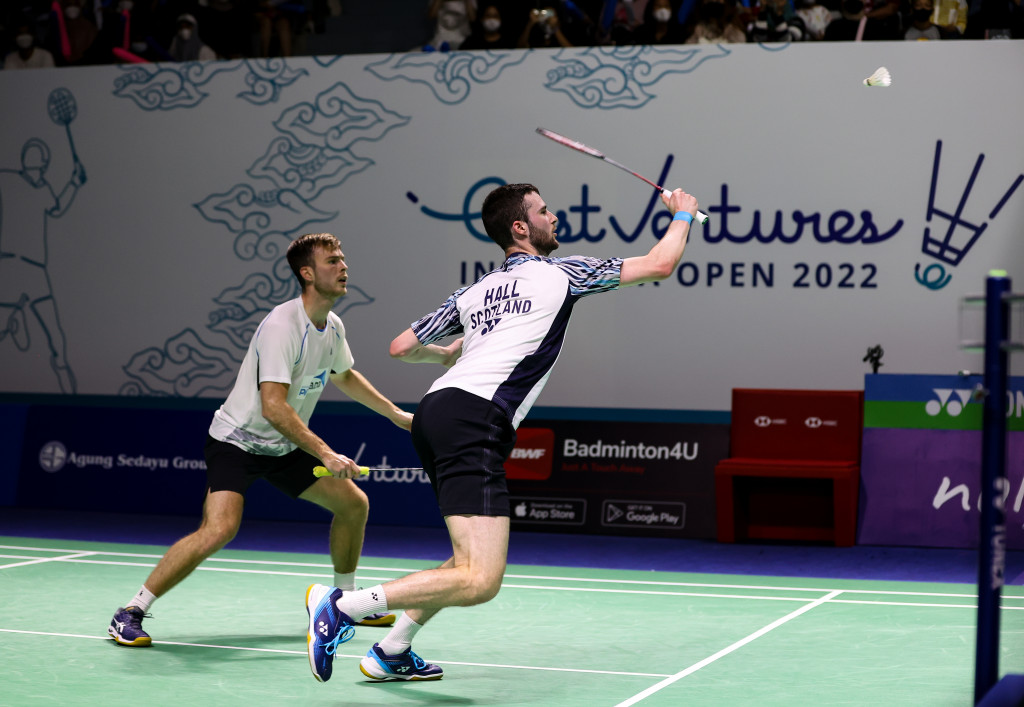 Hall (R) and Dunn competing at the Indonesia Open helped the Scot draw on his own experiences of playing at the Istora.

Guided by lead commentator, Clark, Hall felt he was able to hit the ground running as he climbed the steep steps of the Istora, through the fans and prepared to pick up his cans (headphones), accompanied by notes and preparation advice. The tandem commentated on the third round match between home heroes Marcus Fernaldi Gideon/Kevin Sanjaya Sukamuljo and Kang Min Hyuk/Seung Hee Seo.

“Gill made it easy for me to get involved and before we started commentating, Gill told me: ‘It’s just two badminton fans having a chat about a game of badminton,’ which put me at ease. I didn’t do any warm-ups but I have been known to speak too fast so I really had to make an effort to slow down and put on my poshest Scottish accent,” the Scot laughed.

Part of what makes for a good sports commentator is; delivery – speaking well and clearly; knowledge – knowing your player profiles, tournament information, number of titles, number of quarterfinals/semifinals reached on home soil/overall, and thirdly, match analysis.

What an amazing 1st Indonesia trip! I'm not 100% happy with my level over the 2 weeks but I now know what needs to get better 😎 The atmosphere in Istora was something I've never experienced before, thank you for all of the support and lovely messages 😍 I'll definitely be back💪 pic.twitter.com/bgwDlm4ghV

“I hate listening to myself talk normally, but I have listened to some of it back to make sure I didn’t speak too fast. It was fun to have the opportunity to commentate with a legend of badminton. It was really cool to see behind the scenes and be in the booth. It’s crazy just how much research Gill has and how she keeps track of the games and player profiles. She really is one of the best commentators in any sport around the world and I really hope I can get involved again. I love badminton, so it’s a win-win for me to be involved in this. I’m really grateful.”

Asked if Hall would like to be invited again to commentate, the European silver medallist replied:

“Yes I’d love to do this more often, it was a really fun experience. I love talking and analysing. Any time Gill will have me, I’ll be there.”

Hall will be back in action at the TotalEnergies BWF World Championships 2022 alongside men’s doubles partner, Alexander Dunn, where they face Job Castillo/Montoya Navarro from Mexico in the first round.