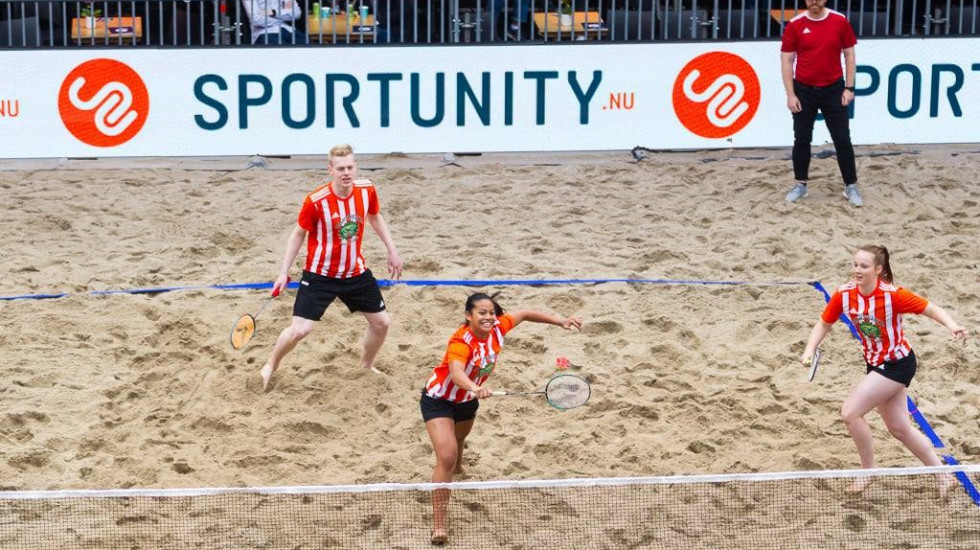 Badminton Pan Am Confederation organised its official continental AirBadminton launch on 18 July in Acapulco, Mexico, alongside the XXIX Pan Am Junior Championships U19 2021.

The event allowed Badminton Pan Am to fulfil its goal of putting a racket for the first time in the hands of as many people as possible, without the need for an indoor venue.

Mexican Badminton Federation, through its president, Javier Orozco, coordinated with authorities in Acapulco to host the launch inaugurated by Badminton Pan Am Administration Chair Zarko Cukic.

Highlights included exhibition matches of 3 vs 3 and 2 vs 2 mixed teams and also audience trying out the new outdoor game.

A Team Relay tournament was also held involving athletes knocked out of the Pan Am Junior Championships. Overall, the AirBadminton launch turned out to be a success and Badminton Pan Am is encouraged the participants will continue playing the sport in their countries, cities and communities.

Badminton Pan Am also plans to continue holding similar AirBadminton events as part of its future international tournaments and assist in the implementation of AirBadminton activities in the region.

In cooperation with Badminton Netherlands, the Netherlands AirBadminton Test Event took place on 29 August in Utrecht at a King of the Court stadium completely converted into an AirBadminton arena with COVID-19 safety measures.

The Spanish AirBadminton Test Event was conducted on 5 September at the outdoor facilities of the Elche City Council. The Mediterranean city was selected to host the first official AirBadminton competition in Spain as it was involved in the research process and development of the AirShuttle.

The Spanish Badminton Federation invited players from the Valencia region to participate, and they enjoyed a fantastic AirBadminton experience. As a result, the national federation now aims to increase the total number of players and locations so people of all ages and abilities can practice badminton anytime and anywhere.

Also in the pipeline is the implementation of an AirBadminton circuit parallel to their official national competitions for the 2022 season.

#AirBadminton fun in the sun 🌞 in 🇪🇸.