Akane Yamaguchi has a light-hearted manner about her these days. A cloud seems to have lifted. Having led Japan into the Sudirman Cup and Uber Cup finals, and winning the VICTOR Denmark Open 2021 in a titanic duel, Yamaguchi is reclaiming her place in the sun.

The Japanese world No.5 opens up about her Denmark Open win, her recent performances, and how she bounced back from the setback at her home Olympics:

What does it mean to win the Denmark Open? 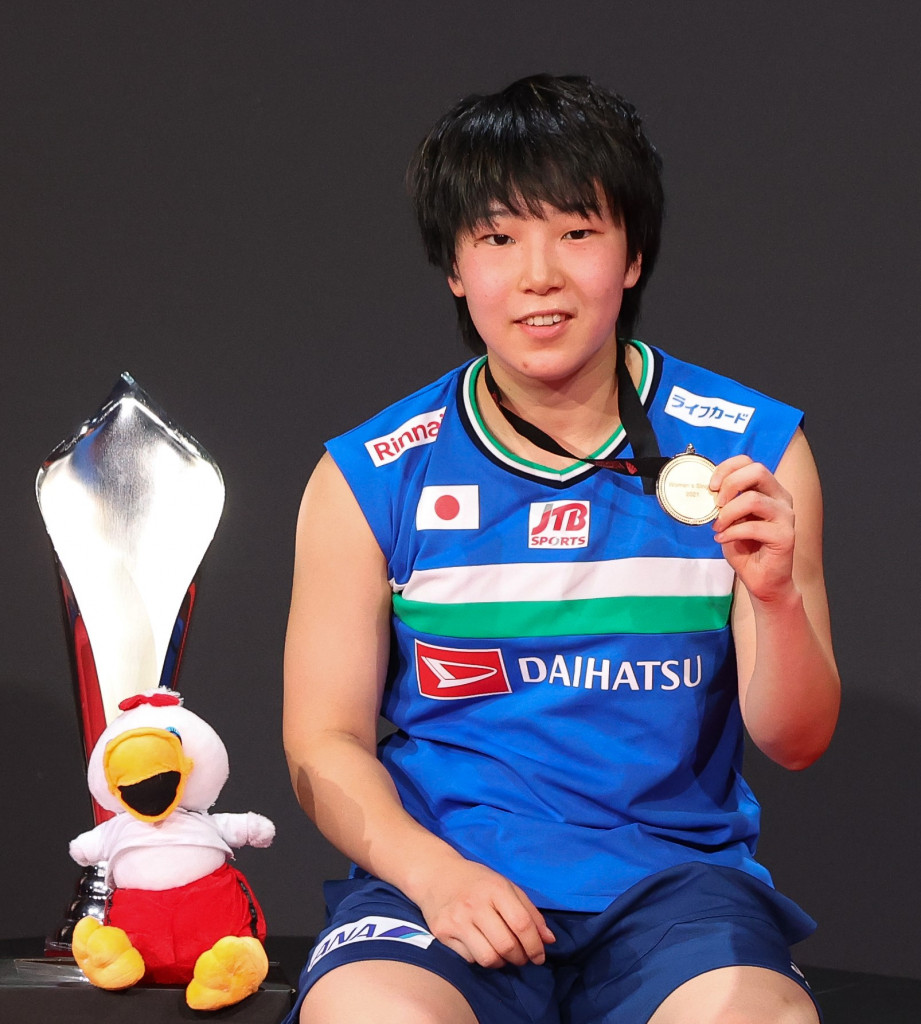 Yamaguchi with the Denmark Open trophy.

Firstly, to win any game is really nice. Secondly, it’s been a while since I won a tournament so that also feels nice. The second game was the key and I’m proud that I could get it. Because of that I think I was able to respond to the cheering so if I could have given back a little bit with my play for the cheering I’m proud of that.

You were distraught after your Uber Cup loss to An Seyoung. Did that loss spur you on in the Denmark Open final?

Yes, in a way… because I lost so badly I had to work on not only strategy but I had to rebuild my emotions towards the final. I chose to think that even though she’s younger than me, I’m the challenger, and had to push towards her. That meant it made me grow to be a challenger and to do better.

You’ve been exceptional during this European season. How difficult was the quarterfinal loss in Tokyo 2020, and did that make you determined to make amends?

Going back, after the Rio Olympics (in 2016), I couldn’t play well but at that time, after Rio, I was able to say like, okay, I didn’t do well so I’m going to do better next time. But at the Tokyo Olympics, the results were not good. And I couldn’t be satisfied and I wasn’t myself in Tokyo. But that time I couldn’t really feel that, okay, now I’m going to do better next time; I couldn’t feel like that. So that’s why, rather than to think of the next event, I thought, let’s just make it zero. I’m going to start from the very beginning. I’m just going to purely enjoy badminton. And I think going in, not thinking about all the results and being zero and just to purely enjoy badminton which I really do, was leading to these good results and high performance.

How highly do you rate this Denmark Open win compared to the other major achievements in your career?

Well, if I’m asked if this match changed my career or my badminton life, honestly, the answer is no. It’s not as big. But because of Covid there were no audiences in stadiums over many months. It has been a very, very long while. This was the first time in a very long while that I played in front of an audience. And because of that, I feel the importance, the excitement of being able to play in a stadium full of people and also that I was able to give back a little bit towards the audience with my play. This whole process was really fun and I can now feel the gratitude towards that.

So for me the badminton philosophy and the badminton life is to be able to give back with my best play the cheering that I receive. 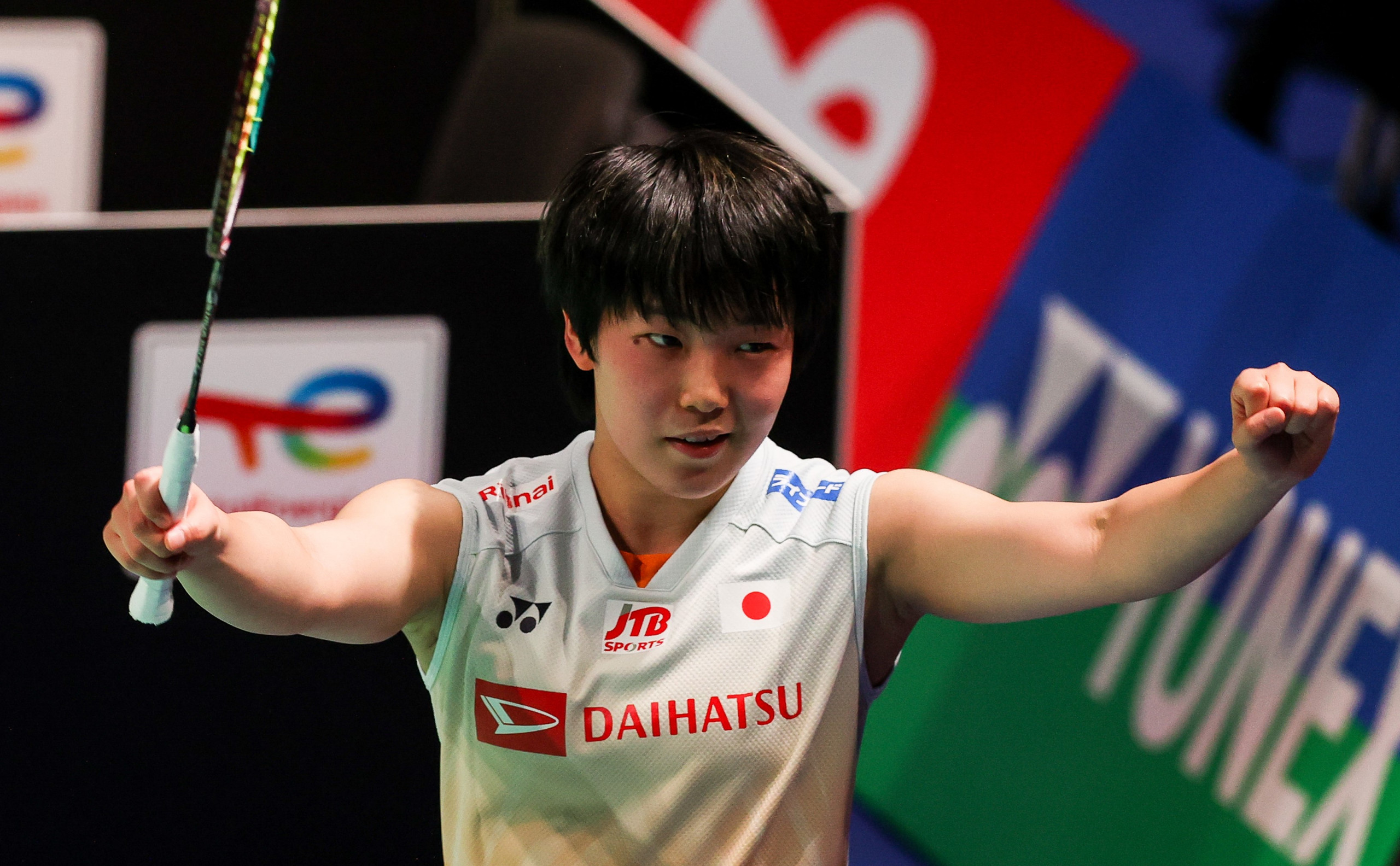 Shy acknowledgement to teammates after winning her match at the Sudirman Cup.

In the team events you led Japan into the finals of the Sudirman Cup and Uber Cup, and you won both matches against Chen Yu Fei…

Team tournaments mean I have Japan on my back, so I should not lose easily. That’s where the strength is coming from, and that’s also why I was able to perform well. It’s the flow from there, that I’m being able to play well now. So rather than thinking about results, I’m just following the good rhythm and the flow from those two tournaments.

On court, you never give away what’s going on in your mind. Do you experience tumult?

You are one of the very few players who never asks for a towel break during a game, you hardly ever change the shuttle. Don’t you need those little intervals to get through intense matches?

I cannot concentrate at a high level through the match. If I take a break my focus will be broken, so that’s why I don’t like frequent breaks.

Of course I get tired. But due to Covid there haven’t been a lot of matches except for the Olympics, so there’s excitement that I’m able to play with overseas players.