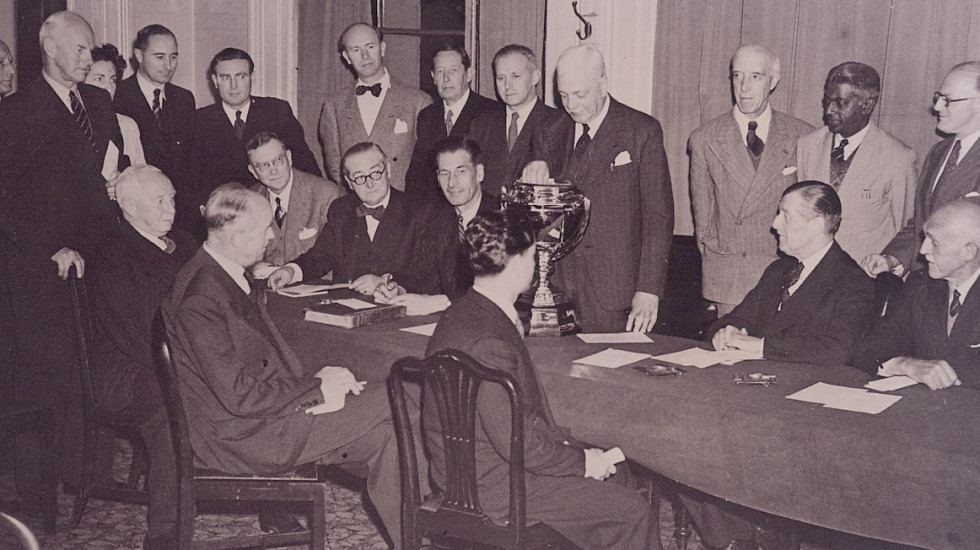 Draw for the first ever Thomas Cup being conducted on 30 June 1948. 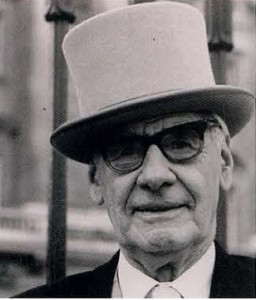 Herbert Scheele (left) was the Honorary Secretary of the International Badminton Federation (now Badminton World Federation) from 1938-1976. In the May 1979 edition of the World Badminton magazine, he revealed how the Thomas Cup came to being. Here’s his story.

It was at a committee meeting on 11 March, 1939, held during the All-England Championships at the Royal Horticultural Hall, London, that the President of the International Badminton Federation, Sir George Thomas stated under “any other business” that he thought the time was then ripe for instituting some sort of international team competition, and that if this was agreed he would be happy to present a suitable trophy.

Then, as now, the All-England Championships was regarded as the principal annual tournament throughout the world, and Sir George’s idea was no doubt stimulated by a Dane and a Malayan each having then reached the semifinal round of the tournament which until only a year beforehand had been almost restricted to English players.

That year an Irish pair won the men’s doubles, and the ladies’ singles went to a Canadian. Players of neither country have, as it happens, yet repeated those successes, but Danes have captured the men’s singles and ladies’ doubles as they did for the first time in that last pre-war meeting.

The committee of the IBF upheld Sir George’s view and recommended to that year’s Annual General Meeting on 5 July that his offer be accepted.

It also appointed a small sub-committee to investigate suitable regulations to apply to the competition, and I was one of the three individuals who met one evening to draft the necessary conditions, which were later approved by the main committee and promptly circulated to the small number of only 15 national organisations then belonging to the Federation for their views.

The Annual Meeting accepted Sir George’s offer and he at once ordered the manufacture of the beautiful trophy which was formally presented to the small gathering which formed the annual meeting of 1940 during the first year of the war.

But then, because of the war and its immediate aftermath, the huge silver-gilt cup spent the next 80 years in some bank vaults.