For 27 years, Ralph Nichols only had one men’s singles shuttler sitting above him on the ‘All England titles won’ list – the great Frank Devlin.

Nichols’ five – one less than Irishman Devlin’s – was usurped by Danish icon Erland Kops in 1965 with his sixth success. The Englishman – considered by many the best of his era – is nonetheless the fifth most successful men’s singles player in the history of the championships behind Rudy Hartono, Kops, Devlin and Lin Dan.

None of them, however, had their careers disrupted by war.

World War II meant that Nichols was away from the sport for seven years but he returned and won his very last title – the French Open – with wife Elisabeth O’Beirne in 1954 at the age of 44. During the war, due to his poor eyesight, he served the Royal Army Pay Corps in Kenya, usually reserved for “men of lower health”.

The son of a plumber, the bespectacled Nichols’ first success as a sportsman interestingly came in tennis when he was a teenager. He only took badminton more seriously after joining the Alexandra Palace Club as a 17-year-old with his brother Leslie.

As for many greats of his era, success was measured by the number of All England titles – Nichols’ nine came between 1932 and 1939. Apart from his five singles crowns, he triumphed in men’s doubles thrice alongside Leslie and in mixed doubles with Bessie Staples.

Nichols, who remains the last local All England men’s singles winner 82 years on from his final victory in 1938, was inducted into the IBF (now BWF) Hall of Fame in 1997.

He died four years later at the age of 90.

“He wasn’t a hard hitter. He had terrific finesse, all touch and wrist. He had a smash and used it when he had to, but he didn’t often have to.” – O’Beirne

Nichols took part in men’s doubles at Wimbledon and reached the third round in 1937. 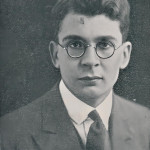 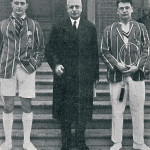 Nichols (right) with Sir George and Raymond White in 1936. 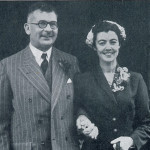 Nichols and OBeirne at their wedding in 1954. 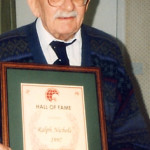 Nichols with his Hall of Fame certificate.