Even among the greats of his time, Tony Gunawan had an extraordinary career. On every aspect of the game, be it all-round ability, big-match temperament or adaptability with different partners, Gunawan’s accomplishments stand out. 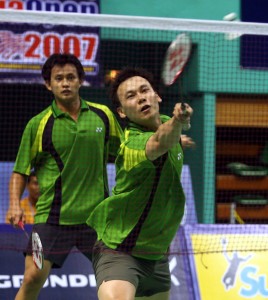 Tony Gunawan had his most successful partnership with Candra Wijaya.

Gunawan was very much an inheritor of the legacy of Indonesia’s brilliance in men’s doubles, and he and his peers, notably Candra Wijaya, Sigit Budiarto and Halim Haryanto, continued Indonesia’s dominance of that category.

A great all-court player, comfortable both at the net and at the back, and with outstanding defence and capable of lightning-quick forays up front, Gunawan established successful partnerships with both Candra Wijaya and Halim Haryanto, for Indonesia had a wealth of doubles talent and they could afford to field different combinations.

With both Wijaya and Haryanto he won a number of major crowns in the late 1990s; but it was with his senior compatriot Rexy Mainaky in 2000 that he helped Indonesia to the Thomas Cup title as they beat China 3-0 in the final. With Mainaky again he won the Badminton Asia Championships that year.

With Wijaya came his biggest moment, as they prevailed in a tense final at the Sydney Olympics 2000 over Korea’s Lee Dong Soon/Yoo Yong Sung – thereby defending Indonesia’s gold in the Olympics.

The next year, he and Halim Haryanto got the better of teammates Wijaya and Budiarto in the All England final, before going on to claim the World Championships in an astonishing manner – 15-0 15-13 over Korean greats Kim Dong Moon and Ha Tae Kwon.

Gunawan emigrated to the US in 2001 having got the opportunity to coach the team for the Athens Olympics. With the retirement of one of his players, Kevin Han, Gunawan decided to partner Howard Bach.

Never thought to be in the reckoning for another major title, Gunawan lived a dream in his adopted country, as he and Back took down a series of higher-rated opponents before dashing the hopes of Gunawan’s former teammates Wijaya and Budiarto in the final. History was made, with a first-ever gold for the US, and making Gunawan the first player to win world titles for two countries.

Yet, Gunawan was not done, for he recombined with former partner Wijaya and continued to enjoy success on the Tour, reaching four major finals in 2007 – including the Japan Open, which they won.

For his longevity and ability to successfully combine with various partners in different scoring systems, Gunawan had few equals.

Vote: Which of Tony Gunawan’s matches would you prefer to see?

Which one of these two matches featuring Tony Gunawan would you like to see in our Fans' Match of the Week?