Indonesia are Suhandinata Cup champions for the first time!

A roller-coaster final at the BWF World Junior Mixed Team Championships 2019 ended with Indonesia pulling off a dramatic win over China and claiming the Suhandinata Cup for the first time ever.

What made it extra special for the Indonesians was that the glittering trophy was instituted by one of their own – the Suhandinata family. Seasoned veterans of the game such as Olympic gold medallists Susy Susanti and Allan Budi Kusuma, who have been part of many a triumph in their eventful careers, were in tears as they watched their young players come through a test of nerve. 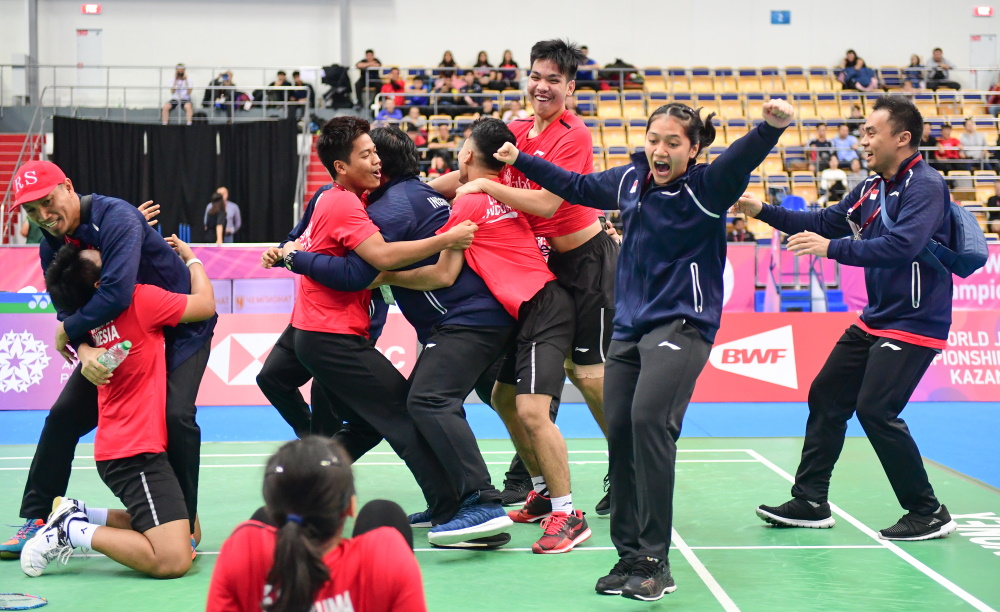 Team mates rush on to the court after Kusuma and Syaikah’s close win.

China’s victory streak of five successive titles thus came to an end with Indonesia becoming only the third non-Chinese team to claim it after Korea (2006 and 2013) and Malaysia (2011).

It was the women’s doubles pair of Febriana Dwipuji Kusuma and Putri Syaikah who delivered the title after they’d stayed steady in slippery circumstances, having saved match point thrice in the second game against Li Yi Jing and Tan Ning. Liu Liang kept China in the hunt from four championships points down.

Outgunned in the opening game, Kusuma and Syaikah showed great character to hang on. Kusuma, cramping in one leg, was barely able to move in the third, but the Indonesians’ sheer tenacity wore down their opponents, and victory was theirs after 88 minutes, 16-21 25-23 21-13.

The previous match had ended in a meltdown for Indonesia. Bobby Setiabudi was sitting pretty with four match points against Liu Liang in the men’s singles, any one of which would have given his team the title, for Indonesia were 2-0 up.

Setiabudi however cracked under the pressure, allowing Liu to wriggle out of his grasp, and giving China a lifeline. The Chinese had, in their semifinal against Japan, fought back from match point down thrice, and a similar story appeared to be unfolding, until Kusuma and Syaikah stepped up to prevent a slide.

Earlier, Indonesia had the perfect start with Daniel Marthin and Indah Cahya Sari Jamil pulling ahead of Feng Yan Zhe and Lin Fang Ling in the opening mixed doubles.

The Indonesians banked on Jamil’s soft touch at the net to dominate the early proceedings, but some indeterminate play handed the advantage back to the Chinese. There were plenty of errors on either side before the Indonesians tightened up their game in the decider and ran away with the match, 21-18 18-21 21-11. 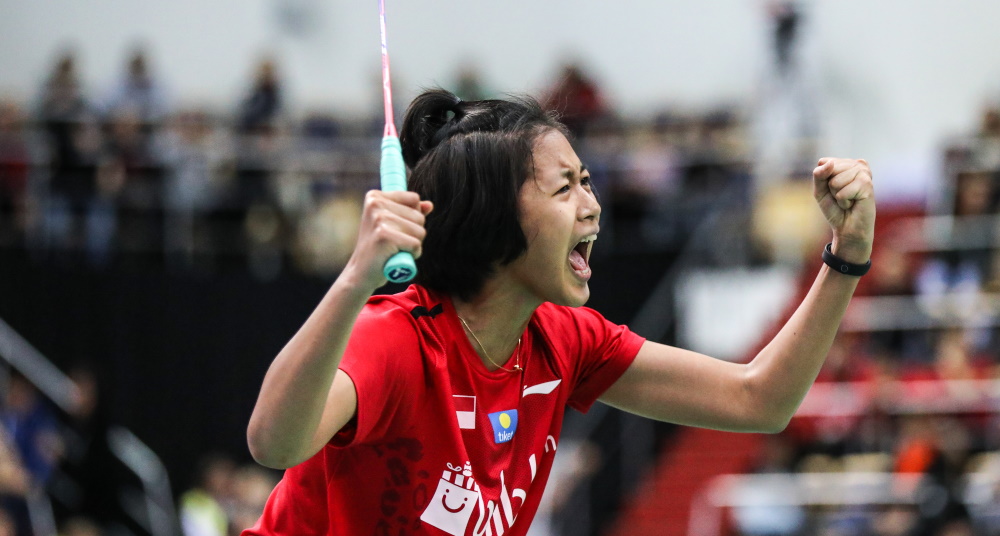 Putri Kusuma Wardani made it 2-0 for Indonesia.

Putri Kusuma Wardani then bounced back from a draining second game loss to Zhou Meng in the women’s singles, finding an extra gear in the third to consolidate Indonesia’s lead.