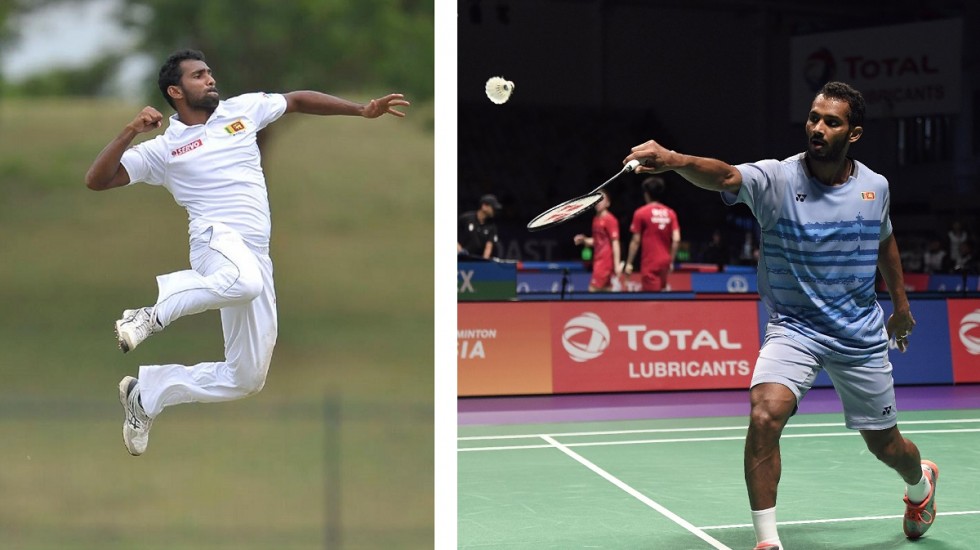 The Karunaratne family has been synonymous with Sri Lankan badminton for generations.

Father Louie was national coach and sons Niluka, Dinuka and Diluka have dominated the national scene for the past 20 years – with Niluka, now 33, representing his country at five Commonwealth Games and two Olympic Games (London 2012 and Rio 2016).

But it was the youngest sibling Chamika, 22, who stole the limelight over the weekend, making his test debut for the Sri Lankan men’s cricket team against Australia in Canberra.

Speaking to the media following his debut on Friday, Chamika (featured image, left) said he too had pursued badminton for most of his junior years.

“Three years ago, I was a national number two,” he said.

“All my family has played badminton. I am the youngest in the family. Yeah, badminton is my first sport.”

If we trace back to 2010, however, it seems Niluka (featured image, right) had predicted such things of his younger brother.

“I know there’s instant money and fame in cricket but we don’t regret it. Hopefully our little brother Chamika will get to don national colours one day.”

All-rounder Chamika made an eventful start to his international career taking a wicket in his first over against Australia.

With a busy season ahead, Sri Lanka badminton is looking to a new wave of players to follow in the footsteps of the Karunaratne brothers.

Men’s doubles pair Buwaneka Gunatilleka and Sachin Dias broke through in 2018, reaching the semifinals of the Commonwealth Games and quarterfinals of the Asian Games.

“During the Asian Games, both Buwaneka and Sachin performed really well to reach the quarterfinals. I think if we give more international exposure to this pair, we can get more results,” he said.

“Niluka and Dinuka Karunaratne had their exposure and we must make sure every player gets a fair deal.”

Gunatilleka and Dias will be eyeing gold at the South Asian Games in Nepal starting 9 March.