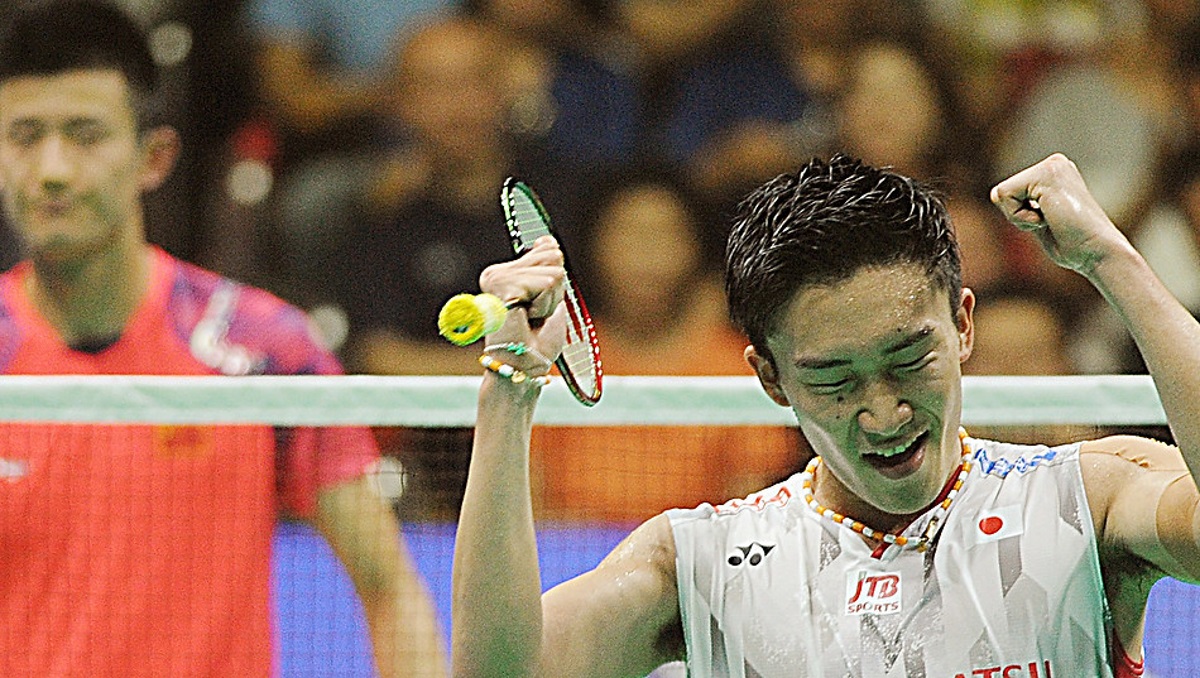 In what must count as one of the most stirring comeback stories in badminton, Japan’s Kento Momota dethroned defending champion Chen Long to capture the Men’s Singles crown at the Badminton Asia Championships 2018 in Wuhan yesterday.

Momota’s return to top-flight badminton, following an extended layoff for over a year beginning April 2016, was finally complete as he not only claimed his first Asian crown, he did in style – 21-17 21-13 – over a player he’d never beaten in four matches. China could take heart from their twin victories in doubles – Li Junhui/Liu Yuchen defended their Men’s Doubles title, while Wang Yilyu/Huang Dongping captured one of the biggest titles of their young career in Mixed Doubles. In the all-Japanese Women’s Doubles title clash, Yuki Fukushima and Sayaka Hirota outplayed Misaki Matsutomo and Ayaka Takahashi to deny their senior compatriots their third straight Asian title.

But all the attention was on Momota (featured image), for the former No.2 – now No.17 – hasn’t played a tournament of this level since winning the India Open in March 2016. Victories over All England champion Shi Yuqi in the second round and Malaysia’s Lee Chong Wei in the semi-finals suggested a player in fine fettle, but Chen Long was expected to be a different proposition. Prior to his layoff, Momota had never even taken a game off Chen Long. Today it was a different Momota. The defending champion was given no breathing space, no leeway to impose his constricting game. Momota was sensational on every count – in the tightness of his netshots; the reflex returns to sure-fire winners; the precision of his smashes, which sniffed out the lines nearly every single time.

Chen had but one spell where he held his ground – after Momota ran away to a 9-2 lead, the Chinese pegged him back with his characteristic steady game and pounced on the opportunities that came his way. But Momota was not to be deterred even when his opponent pulled up alongside; he simply raised the bar. There was a surreal calmness to his netgame as he caressed the shuttle over the tape with Chen lurking in front; he was unerringly in the right spot in most rallies, dabbing the shuttle into the farthest corners and forcing the defending champion to do all the running. When the lifts were marginally short, Momota exploded into jump smashes that sent the shuttle whistling past Chen’s defences.

Chen had exhausted his options midway through the second. The loss of confidence showed, as he made soft errors on the final two points.

The champion took a few moments to ponder over the magnitude of the victory. “This is an important victory… I dedicate this to all those who stood by me,” Momota said. “In my first tournament on my comeback, when I lost to (compatriot) Kanta Tsuneyama in the final of the Canada Open, I was confused about my own form and ability. It’s really significant that I beat Lee Chong Wei and Chen Long in the same tournament… but I have to do more to catch up with them. Today I had to be mentally strong even when I had a big lead, otherwise Chen Long would catch up.”

Despite the victory, it wasn’t one of Tai’s better performances. The Chinese Taipei star looked unconvincing and rarely enjoyed extended spells of dominance, but did just about enough to nudge the tape ahead of the Chinese.

Tai had an up-and-down match, making numerous errors of judgement in the deep even at the end of both games, but despite all the errors, her shoulders never fell, nor did her risk-taking. There were two astonishing shots late in the match that showed she was bristling with confidence – at 18-19 and 19-20 she conjured cross net-shots that caught out Chen, and from there Tai breezed to victory.

“Today I made several errors, I just didn’t have the control in the beginning and had to struggle all through,” Tai acknowledged. “Yufei has progressed very quickly and she will continue to improve. Today we had some long rallies and there wasn’t much difference between the two of us. I had to remind myself to stay consistent, she gave me a lot of trouble as she is one of the most athletic players and can cover the court well.” The day began well for China. Wang Yilyu and Huang Dongping capitalised on a flat performance from Tontowi Ahmad and Liliyana Natsir in the Mixed Doubles final.

Ahmad was totally off-colour, struggling in defence and finding the net far too often. With her partner unable to exert pressure with his attack, Natsir had no opportunities to dominate at the net, and the Chinese had it all their way in the second game. A netted serve from Natsir was an apt conclusion to their disappointing day, as they went down 21-17 21-17.

“I could not play my best today,” rued Ahmad. “There were no surprises, we were well prepared as we’ve played them a few times. We made too many mistakes today, maybe our motivation wasn’t as high as it should’ve been.”

Li Junhui and Liu Yuchen won the second gold for China with a come-from-behind effort against Japan’s Takeshi Kamura/Keigo Sonoda, 11-21 21-10 21-13.

“We didn’t execute out tactics well in the opening game,” reflected Li Junhui. “Our performance was very uneven, but after the first game break we were able to pull together and put pressure on our opponents. We’re happy with the win but we think there’s much to learn from this match.”