From seasoned top guns such as Malaysia’s Cheah Liek Hou and Madzlan Saibon to exuberant newcomers such as Chukwuebuka Sunday Eze of Nigeria and Kenya’s Asiya Mohammed Sururu, all enjoyed their moments in the spotlight and the hard-won medals dangling from their necks at MTN Arena in Lugogo, Kampala. 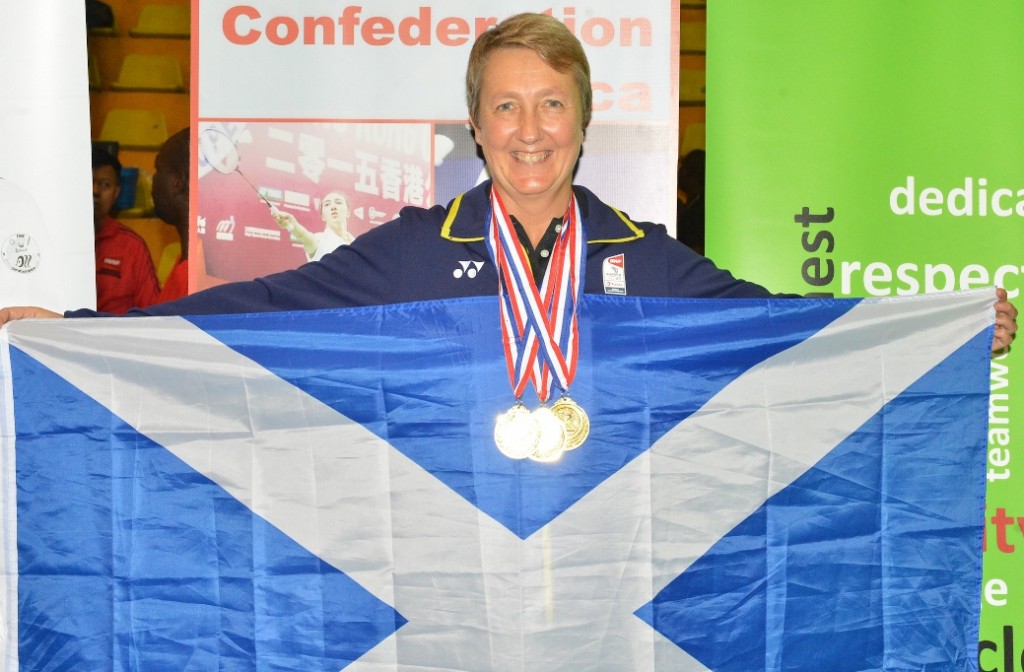 “I am getting too old for this!” laughed the 54-year-old Scotswoman in the aftermath of her triple success.

“It’s been fantastic. I have loved being here. In Women’s Doubles, Elizabeth and I communicated well on court and, in Mixed Doubles, Guillaume and I were fired up for the final because we knew the Nigerians are good. Our strategy worked well – not to hit the shuttle too hard but to find the gaps. My singles final was hard. Khadija has come on leaps and bounds and she is quite strong. I think that with more training she could go to the Paralympics.”

There was double success for a number of players including Sukant Kadam and Umesh Vikram Kumar. Together the Indians claimed Men’s Doubles SL 3 – SL 4, beating Bello and Eze (21-10 21-12) in 18 minutes. Kadam also conquered the Men’s Singles SL 4 field while his compatriot won Men’s Singles SL 3. Top-seeded Kumar rebounded from a game down to topple team-mate, Kumar Nitesh, 17-21 21-15 21-15, in one of three finals that went the distance.

Another three-game encounter – Women’s Singles WH 2 – was arguably the match of the finals as Akosua Nkansah of Ghana battled Sururu for the title. A neck-and-neck tussle saw Nkansah snatch the first game, only for her rival to fight back in the second and force a decider. Suddenly, it was Nkansah again as Sururu seemed tentative, making several mistakes. At 11-3 up, Nkansah was in the driver’s seat and, at 18-13, the gold looked certain to be hers but amazingly the tide shifted and the Ghanaian was now the jittery player while Sururu grew in confidence, clamouring from 14-19 down to 20-19 ahead. That match point went by but another one came shortly after and, when Nkansah failed to return the shuttle, victory went to the jubilant Kenyan: 22-24 21-13 22-20.

An impromptu party broke out with Sururu’s team-mates storming the court in celebration of an unlikely triumph.

“I felt so tense today. I don’t know why. I was fine all week. In the third game, my coach was telling me to relax and return the shuttle deep to her backhand and I tried to do that. As the scores got closer I saw she was beginning to panic and her shots were weaker. When the score got to 19-19, reality hit me. I said ‘What, I can win this match!’ and I tried to be calm and take my time,” said Sururu, enjoying her belated birthday gift after turning 26 last Wednesday.

Shell-shocked Nkansah was hard pressed to explain her demise but conceded she needs more experience in handling pressure during matches as this was her first tournament.

On the other end of the spectrum, wily veteran Saibon was at ease versus Amir Levi of Israel in the Men’s Doubles WH 2 showdown. The Malaysian navigated a difficult patch midway through the second game when Levi led, ultimately securing victory 21-14 21-16. His countryman Cheah Liek Hou was equally impressive, speeding past India’s Sugil Abbas, 21-11 21-5, in the Men’s Singles SU 5 final. Cheah and Hairol Fozi Saaba also won Men’s Doubles gold in the same sport class.

France’s Richard Perot also goes home with two gold medals, topping the table in Men’s Singles WH 1 and Men’s Doubles WH 1 – WH 2 with Sanjeev Kumar of India. Perot’s compatriot, Guillaume Gailly, was loudly cheered by competitors as he collected a full set of gold, silver and bronze. Gailly was one of two tutors at last week’s African Para-Badminton Legacy Project in which many of players who competed in this tournament received three days of specialised training, thanks to the Badminton World Federation and AGITOS Foundation which is the development agency of the International Paralympic Committee.

Among them was the bubbly Jeremiah Ngungi Maringa – a short-stature athlete from Kenya – who also won three golds in his sport class, though two of the events were exhibitions.