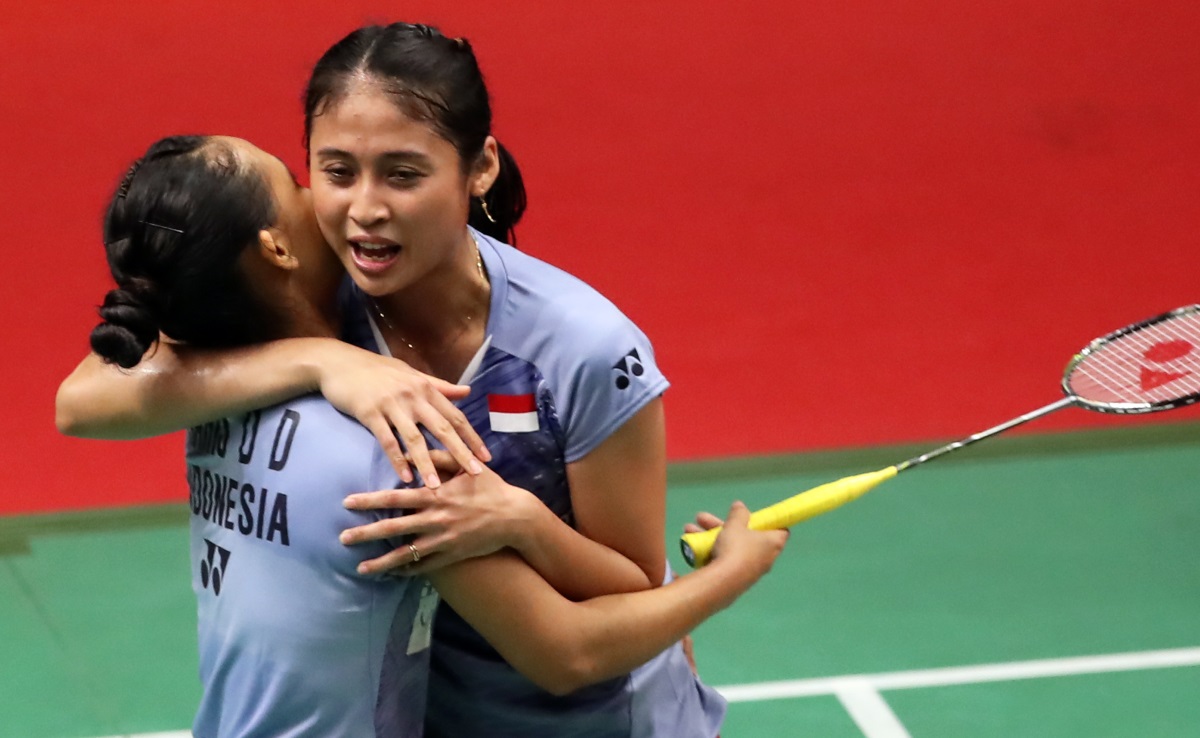 The Indonesians (featured image) have never made the last-four of an event of this level. Having beaten top seeds Chen Qingchen/Jia Yifan (China) in the second round, Pradipta and Haris did not loosen their foot off the pedal against Japan’s Naoko Fukuman and Kurumi Yonao. The Indonesians had an answer to anything that the defensive Japanese could throw their way, and it was one-way traffic from start to finish as they closed it out in 45 minutes: 21-12 21-12. Up next will be another Japanese pair, third seeds Yuki Fukushima/Sayaka Hirota, who were also dominant against Thailand’s Jongkolphan Kititharakul/Rawinda Prajongjai, 21-19 21-13.

The other half will be a battle between second seeds Misaki Matsutomo/Ayaka Takahashi (Japan) and another surprise semi-final pair, Kim So Yeong/Kong Hee Yong of Korea.

In Men’s Singles, Japan’s Kento Momota’s dream run showed no sign of slowing down, as he took down his second big-name opponent – Chinese Taipei’s Chou Tien Chen – to make the semi-finals. “I think he was a bit nervous today,” Momota said of his opponent. “I’m happy with the way I’m playing. I hope to get back to where I was. I was No.2 earlier but I hope to become No.1.”

Momota was on mission mode from the first point, and Chou had no answers to his speedy and crafty rival’s control and judicious mix of attacking shots. For most of the first game Chou looked out of Momota’s league, for the Japanese allowed him just five points.

Chou made amends in the second, and it was an even battle until the break, after which Momota once again shifted gears to take the last nine of ten points: 21-5 21-13. Momota’s semi-final opponent will be Malaysia’s Lee Chong Wei, who delivered a masterclass against top seed Kidambi Srikanth. For the second time in their three meetings this month, Lee stamped his authority in no uncertain terms, his pace and precision putting tremendous pressure on Kidambi. The Indian, normally a cool customer under pressure, however was vulnerable yesterday, and as the match progressed could do little right. Even routine overhead clears and net shots sailed wide off the lines, and Lee jogged away to a 21-12 21-15 victory.

“I was never in the game, he totally dominated it,” shrugged Kidambi. “I gave him too many openings in the beginning of the match. It’s not that I’m playing badly, just that I gave him some easy shots and then I was playing the catch-up game, it doesn’t work against someone of his level. I thought of playing error-free, but so many lifts went out. It’s so different from the way I played earlier. He played really well, he’s adjusted very quickly to the conditions.”

It was a day of mixed fortunes for India. Saina Nehwal did not allow young Korean Lee Jang Mi any quarter in a 21-15 21-13 rout, but her compatriot Pusarla V Sindhu looked totally off-colour as she went down to seventh seeded Korean Sung Ji Hyun, 21-19 21-10. After an opening game in which Pusarla stayed combative, the second game was all Sung’s, with the Indian collapsing without a fight.

“The flow went off in between,” Nehwal said. “It wasn’t that tough. She was retrieving a lot, she has some deceptive shots, like in her overhead strokes. She can upset top players on her day. It’s going to be Tai Tzu Ying in the semi-final, it’s a challenge. I have to fight it out. The flow is coming back. I’m happy with the way I’m moving. The confidence is coming back. I’m not worried about who I’m playing, just want to play all my shots. You can’t always be careful about how you’re playing, you just have to play all your shots.” China had a great day in the other two doubles categories. The hosts grabbed three spots in the Men’s Doubles and Mixed Doubles.

It will be up to Japan’s Takeshi Kamura and Keigo Sonoda and Indonesia’s Tontowi Ahmad/Liliyana Natsir to stop the Chinese charge in Men’s Doubles and Mixed Doubles respectively.

Kamura/Sonoda were never in trouble in their quarter-final against Malaysia’s Goh V Shem/Tan Wee Kiong as they won in 41 minutes, 21-18 21-17.

Ahmad and Natsir had to pull themselves up after a mid-match slump against China’s He Jiting/Du Yue, and they closed out the match 21-11 9-21 21-10.

Fifth seeds Zheng Siwei/Huang Yaqiong decimated the challenge of Hong Kong pair Tang Chun Man/Tse Ying Suet – who have beaten them in the past – with a 21-8 21-7 score.