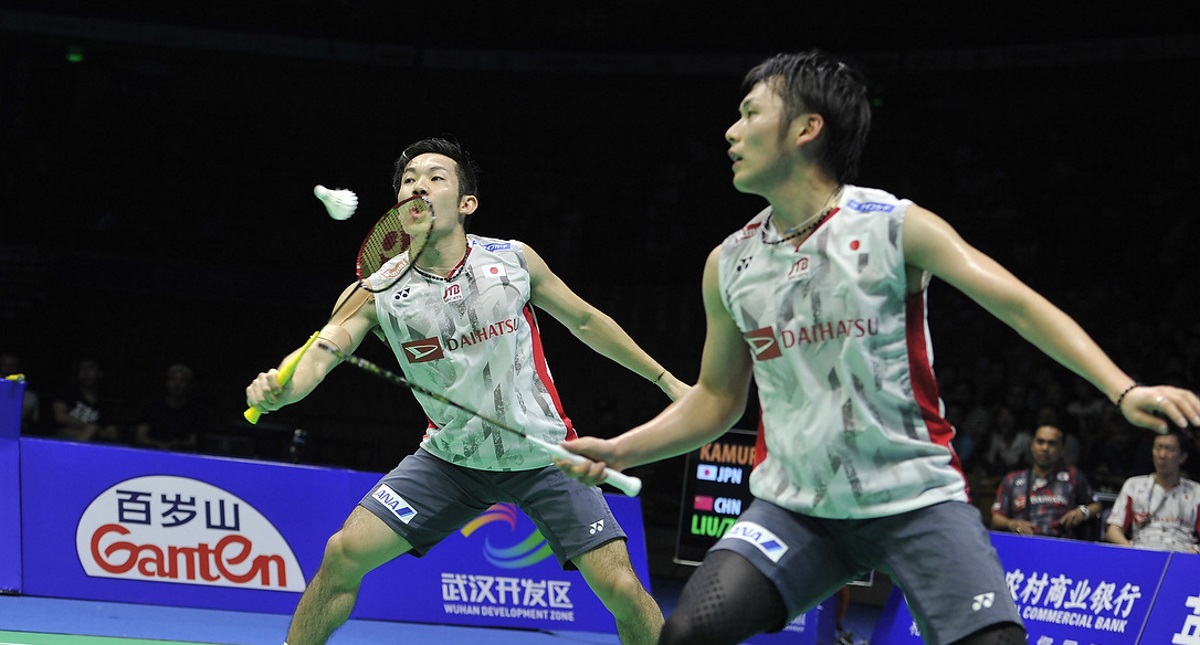 Japan had a stellar day at the Badminton Asia Championships 2018 in Wuhan today, winning all their four matches and assuring themselves of the Women’s Doubles gold. The icing on their cake was the form of resurgent star Kento Momota, who extended his run into the Men’s Singles final. Momota, in his first tournament of this level since March 2016, is now one win away from his maiden Asian title.

The Japanese World No.17 was outplayed by Malaysia’s Lee Chong Wei in the early part of the semi-final. Lee, pacy and aggressive, had the vital lead at the end of the first game but uncharacteristically frittered away the advantage – a wild smash helping Momota level at 19. Another error by the Malaysian put the Japanese ahead by a game. It was an uphill battle from there as Lee increasingly appeared weary and Momota had the match at 21-19 21-14.

“I relaxed a bit when I was leading 16-9 in the second but then he just didn’t give up and kept chasing every shuttle. I realised it could get tricky and had to maintain my focus,” said Momota. “This is a good result for Japan. When I was unable to compete, my teammates like Kenta Nishimoto and Kazumasa Sakai had some good wins and that was motivation for me to beat the top players as well. I’m happy I’m in the final but I see this more as an important result for Japan.”

Momota however has a formidable task on hand in the final as he takes on defending champion Chen Long, who has shown glimpses of his best this week. Chen absorbed all that India’s HS Prannoy could throw at him, walking away a winner at 21-16 21-18.

Prannoy did little wrong; indeed, through some periods he troubled Chen with his heavy smashes and anticipation of openings. However, it was Chen’s overall steadiness, his ability to convert hopeless positions into one of dominance, that turned the tide his way. The few errors of control in either game that Prannoy committed were enough for Chen to slip away and lock the gates, and the Indian was left wondering at the lack of chances that came his way. The Women’s Singles semi-final between Chinese Taipei’s Tai Tzu Ying and India’s Saina Nehwal was a spectacular contest. Nehwal has often been outclassed by Tai but today the Indian countered Tai’s wares with her athleticism and power.

Nehwal had four game points in the first and a 19-16 lead in the second but failed to convert when it mattered; for her part, defending champion Tai came up with the goods when it mattered. Defending champions Matsutomo and Takahashi are one win away from becoming the first doubles pair to win three titles in a row at the Badminton Asia Championships. The only other player who has accomplished this feat is China’s Ye Zhaoying between 1992 and 1995.

Both Japanese pairs had to work hard in their semi-finals. Matsutomo/Takahashi needed 73 minutes to defeat Korea’s Kim So Yeong/Kong Hee Yong, 21-17 20-22 21-14, while Fukushima/Hirota needed 88 minutes to down the tenacious Indonesians Rizki Amelia Pradipta/Della Destiara Haris 27-29 21-17 21-11. Cheng/Zhang Nan, 14-21 21-12 25-23, after saving a match point, and needing four of their own to clinch the match. The Japanese face  defending champions Li Junhui/Liu Yuchen, who won an all-China semi-final over Huang Kaixiang/Wang Yilyu in three games.

In Mixed Doubles, Indonesia’s Tontowi Ahmad and Liliyana Natsir have an opportunity to reclaim the title they last won in 2015. The Indonesians were near-perfect as they dismantled China’s Zheng Siwei and Huang Yaqiong, 21-11 21-13.

“We did not expect to win so easily, we expected to be tired at the end of the semi-final,” said Natsir. “Today our communication was good and we played the right pattern. We were a bit confused about that at the Indonesia Masters, where we lost to them. We weren’t sure of our positions after the serve. Today I was in control at the net and was able to spot the openings. We were also motivated to beat them on their home turf.”

Facing them in the final will be another Chinese pair, Wang Yilyu/Huang Dongping, who got the better of compatriots Zhang Nan/Li Yinhui, 18-21 21-18 21-17.