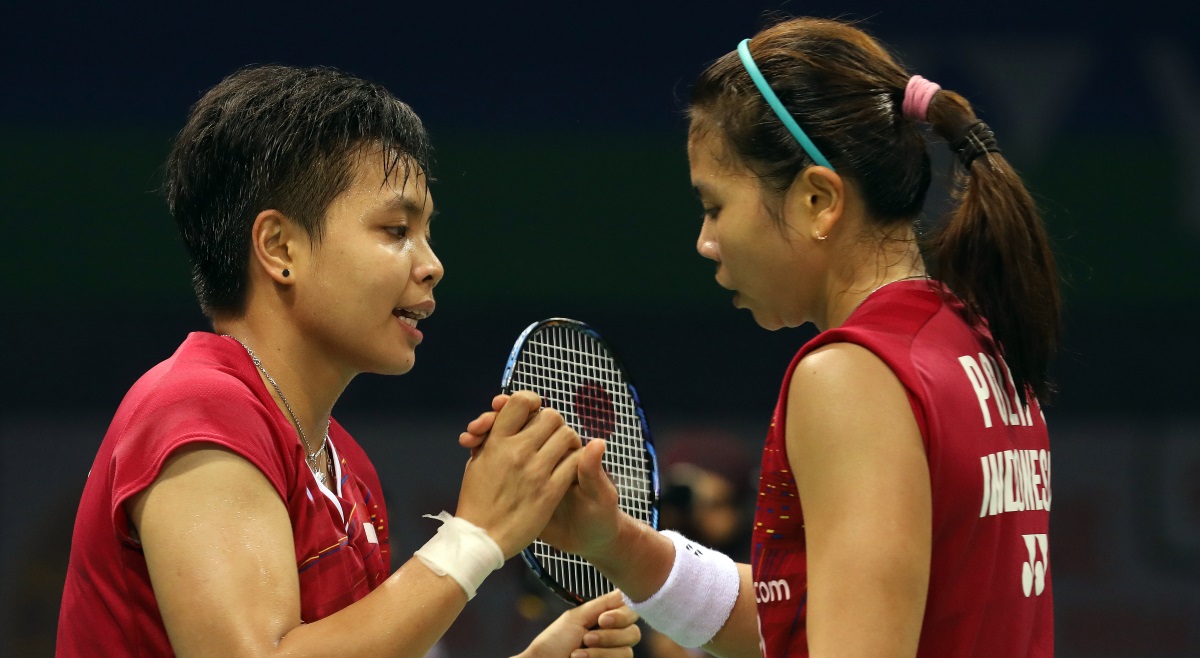 The last time Greysia Polii was in Wuhan for the Badminton Asia Championships, she could barely drag herself from the court.

That was because she and then-partner Nitya Krishinda Maheswari and Japan’s Naoko Fukuman and Kurumi Yonao had been part of an epic semi-final; the match going on for an incredible 161 minutes – making it the longest match ever. Two years since then, Polii’s back, with a different partner – Apriyani Rahayu – and the Indonesians were taken the distance by local Women’s Doubles pair Huang Dongping and Li Wenmei in the opening round, 15-21 21-11 21-19.

It was a typically combative display by the doughty Indonesians, who found their Chinese opponents just as stubborn and sticking close despite falling behind by a narrow margin all through the final game.

“We knew before we came here that we had a tough draw,” said Polii (featured image, right). “We just controlled our emotions well at the end.”

“Those are unforgettable moments,” added Polii, of the 2016 ultramarathon that the Indonesians lost. “I will remember it for the rest of my life. That was for me the toughest match ever. It was also the sweetest.”

Despite featuring in the record books, the match took a toll on her partner – Maheswari would struggle with both form and fitness following the event.

“Nitya was struggling physically before we came to the Asian Championships. That was the moment she forced herself to do her best. After the Olympics she planned to get surgery and rest. I feel bad for her, that she went beyond her limits in that match. I really miss her,” says Polii.

The Indonesians face Korea’s Baek Ha Na/Lee Yu Rim for a place in the quarter-finals.

The pair they lost to in 2016 – Fukuman and Yonao – also progressed to the second round after No.6 seeds Lee So Hee/Shin Seung Chan (Korea) retired early in their match. Their compatriots Misaki Matsutomo/Ayaka Takahashi and Yuki Fukushima/Sayaka Hirota also made the second round, but fourth seeds Shiho Tanaka/Koharu Yonemoto were upset in a thriller by Korea’s Kim So Yeong/Kong Hee Yong 19-21 23-21 21-19.

There were two big upsets in the singles, with Japan’s Nozomi Okuhara and China’s Lin Dan crashing out.

Okuhara struggled all through her 21-15 23-21 loss to home hope Gao Fangjie; the Japanese, who suffered a right knee injury last year, was missing her impeccable control and erred particularly on the soft shots at the net.

“My knee is perfect but I cannot train at 100 percent,” Okuhara said. “I could not make the adjustments I was required to, so I kept repeating my mistakes.” Wang Tzu Wei takes on India’s HS Prannoy, who also came through in three games, over Thailand’s Kantaphon Wangcharoen. Prannoy’s teammates Kidambi Srikanth and Sai Praneeth also joined him in the second round.

India also had reason to rejoice in Men’s Doubles as young duo Arjun MR and Shlok Ramchandran fought off deficits in both games to take down higher-ranked Koreans Chung Eui Seok and Kim Dukyoung, 25-23 23-21.

“Our coaches have put in a lot of effort. I lost about five pounds, I’ve become lighter on court and that helped. The way we fought back, after being down in both games… this is the first time we’ve done it. We’ve come close to beating the top 15 pairs. Today I think the way we did it, not giving up hope, clawing our way back… The plan was to not engage in too many drives, cut down the pace of the shuttle. My job was to play a couple of drives, block, and try to get the lift. I was good from the baseline today, and he was catching the shots at the net. Our body language was good, we supported each other. We’d drifted apart in the past; it’s a good sign that we’re coming together as a pair.”

The Indians have a tough task tomorrow as they will be up against top seeds Li Junhui/Liu Yuchen.

Indonesia’s Ricky Karandasuwardi/Debby Susanto were in for a surprise as they dropped a game to Sri Lanka’s Sachin Dias/Thilini Pramodika Hendahewa, but recovered in time to post a 21-14 17-21 21-10 victory.