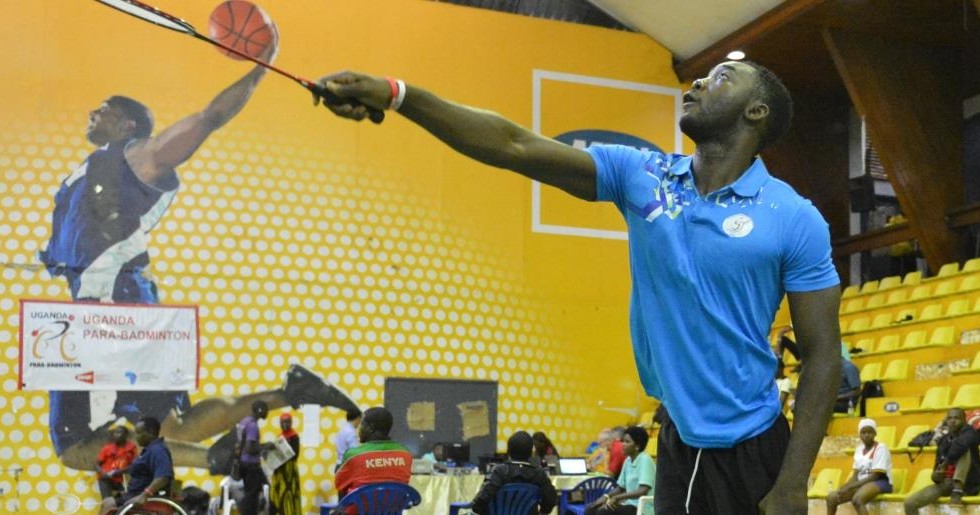 Keen on upgrading the two bronze medals he won a year ago, Rafio Oyebanji Bello fought back tenaciously today to triumph over Indrajit Pal on the opening day of the Uganda Para-Badminton International 2018. To the delight of fellow Africans, the 31-year-old battled past his Indian rival, 17-21 21-17 21-19, in 46 minutes. The spirited Men’s Singles SL 4 clash captivated the moderate gathering inside MTN Arena in Lugogo as the entire continent threw its support behind the Nigerian who screamed in celebration.

“I feel good because I lost in the semi-finals here to another Indian last year. The Indians are really good so I am pleased to win this match. It was tough and I feel a bit if pressure because I know the expectations are higher since I won bronze last year. I am aiming to win gold this time,” stated Bello candidly.

Later in the day, the No.2 seed had a much easier outing versus Uganda’s James Kapleni (21-3 21-5) as round-robin matches were completed in all the singles events.

In Men’s Singles SL 3, newcomer Emmanuel Pinochet Amougui (featured image) also bounced back from losing the first game to beat Uganda’s Bashir Mutyaba. The Cameroonian prevailed 13-21 21-9 21-17 in his first tournament after taking up the sport a month ago. It was a heartening upswing in fortunes for the 33-year-old who fell in a close morning tussle versus another Ugandan, Edward Kizza Kabonge (20-22 21-13 23-21).

“I was nervous in the first game as I was trying not to make any mistakes. After that, I settled down and became more confident against Mutyaba. I am enjoying badminton and I hope to win more matches,” said Amougui.

The comeback theme continued into the evening as Egypt’s Nasr Elsayed went the distance in ousting Peter Achola Oloo. The Kenyan seized the opening game only to see his opponent storm back to snatch their Men’s Singles WH 2 encounter (20-22 21-10 21-13).

Meanwhile, Malaysia’s Cheah Liek Hou – the top seed in Men’s Singles SU 5 – and his team-mate Madzlan Saibon, top-seeded in Men’s Singles WH 2, showed their class, brushing aside their respective rivals. In Men’s Singles WH 1, Richard Perot of France was given a good fight by Atef Mahmoud. However, Perot came through 21-19 24-22 in 36 minutes versus the Egyptian.

Tomorrow will see doubles action across all six sport classes. Athletes are competing for honours in 19 events at this year’s tournament, with many players participating in their first international since being officially classified by the Badminton World Federation earlier this week.