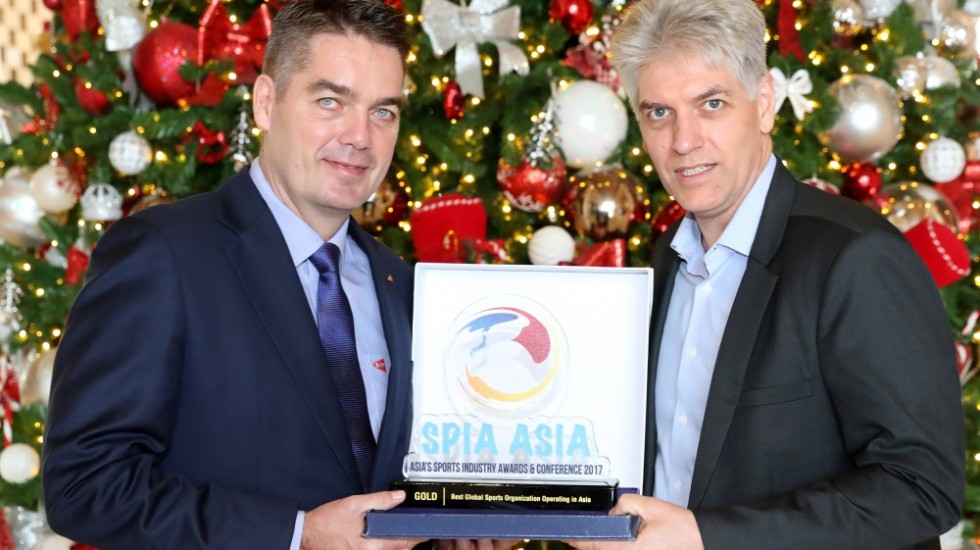 The Awards Gala was held at the end of a two-day conference (6 and 7 November 2017) which was attended by more than 300 delegates and 20 international speakers from various industry sectors. There were 17 Asian and six Thai award categories, and winners were awarded gold, silver and bronze medals for their achievements and contributions to the sports industry over the last 12 months.

The Sports Business Conference, titled ‘The Business of Sports –  Asia’s Sports Industry in the Fast Lane III’ – has been held annually since 2015 to celebrate the brands, agencies, marketers and organisations that influence the sporting landscape in Asia. The conference was endorsed and supported by Thailand’s Ministry of Tourism and Sports, the Sports Authority Thailand, and the Tourism Authority Thailand.

In the ‘Best Global Sports Organization Operating in Asia’ category, entries were accepted from those sporting bodies that have a presence or reach in at least 15 countries, and with active grassroots programmes, talent development, regular competitions, and with a global fan base. The Awards Committee was composed of selected experts representing various fields of the sporting industry.

“The standard of award submissions and competition has been exceptionally high this year,” said Eric M Gottschalk, CEO of MMC Sportz Marketing LLC, organiser of SPIA Asia – Sports Industry Awards & Conference 2017. “Having started with almost 400 entries, all were subject to a fair and transparent judging process that culminated with thorough appraisals by a panel of 20 experts. In many categories the scoring was extremely close and the bronze, silver and gold winners announced at the SPIA Asia Awards Gala should be very proud of their achievement.”