Intriguing storylines were to the fore today as pairs from Hong Kong, Indonesia and Japan swept into tomorrow’s finale of the Dubai World Superseries Finals, eyeing a significant slice of the million-dollar jackpot.

Whether it was the courage and determination of the under-strength world No.1 duo of Marcus Fernaldi Gideon and Kevin Sanjaya Sukamuljo in Men’s Doubles or the ‘we-can’t-believe-it’ outpouring of emotion from Tang Chun Man/Tse Ying Suet (featured image) in Mixed Doubles, fans

had more than their fill of soul-stirring moments in the semi-finals at Hamdan Sports Complex.

However, while their matches may have been less dramatic, Japan had the greatest reason to celebrate on semi-finals day as that nation impressively laid claim to the Women’s Doubles title, with Shiho Tanaka/Koharu Yonemoto and Yuki Fukushima/Sayaka Hirota advancing to the championship match.

Justifying their top billing in the Destination Dubai Rankings, two of the season’s stellar partnerships calmly brushed aside their respective opposition to ensure the Land of the Rising Sun will win the coveted honour. Fukushima/Hirota started the ball rolling, smoothly ousting China’s Huang Yaqiong/Yu Xiaohan, 21-13 21-14, and were later followed by Tanaka/Yonemoto. The latter withstood Denmark’s Kamilla Rytter Juhl/Christinna Pedersen, 21-19 21-19; the Danes fighting all the way despite admitting they were below par.

“We communicate a lot on court and that has helped us. We expected a tougher match but we are happy to be in the final and we want to win our last match of the season,” said Fukushima, jointly adjudged the BWF Most Improved Player of the Year with her partner. 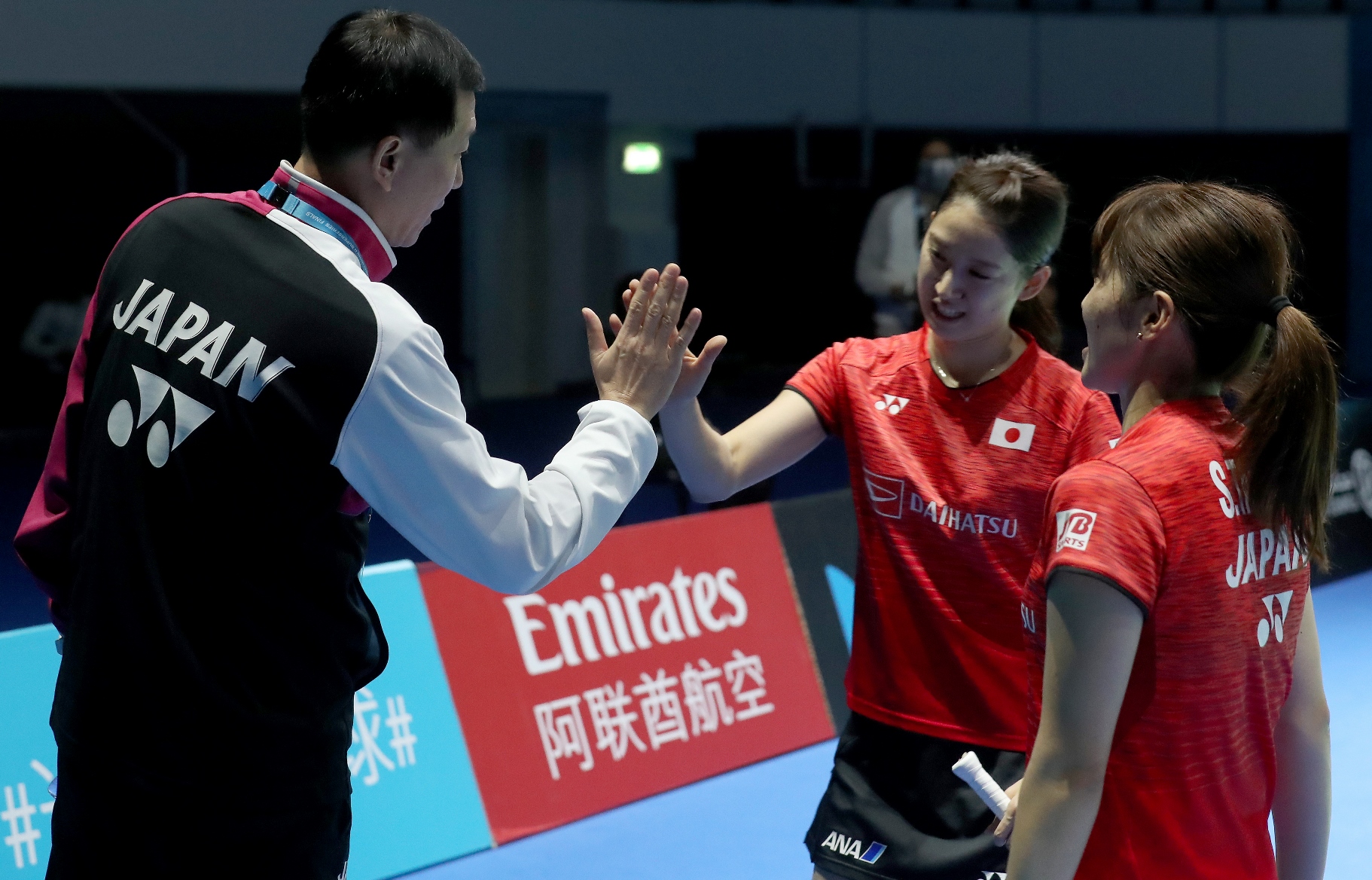 Overcoming defeat in their first group match, Tanaka/Yonemoto have rebounded smartly and, having avenged their World Championship defeat by the Danes, will now look to exact a similar result versus their team-mates who beat them in their last clash.

“It will be an honour to play another Japanese pair for the title. We look forward to it,” said Yonemoto.

Meanwhile, driven by their sheer will to succeed, Gideon and Sukamuljo fought off arch-rivals, Takeshi Kamura and Keigo Sonoda, in a high-calibre shoot-out that had screaming spectators on the edges of their seats as momentum swung back and forth until decisively turning towards the ‘Minions’ after the third-game interval. Livewire Sukamuljo terrorised the Japanese in the front court to seize the ascendancy, his lightning-quick interventions all but securing the 21-10 18-21 21-16 triumph in which he and Gideon deliriously delighted.

“We are very happy to get to our ninth Superseries final. It was a tough match and we had to try different strategies,” said Sukamuljo, ecstatic to 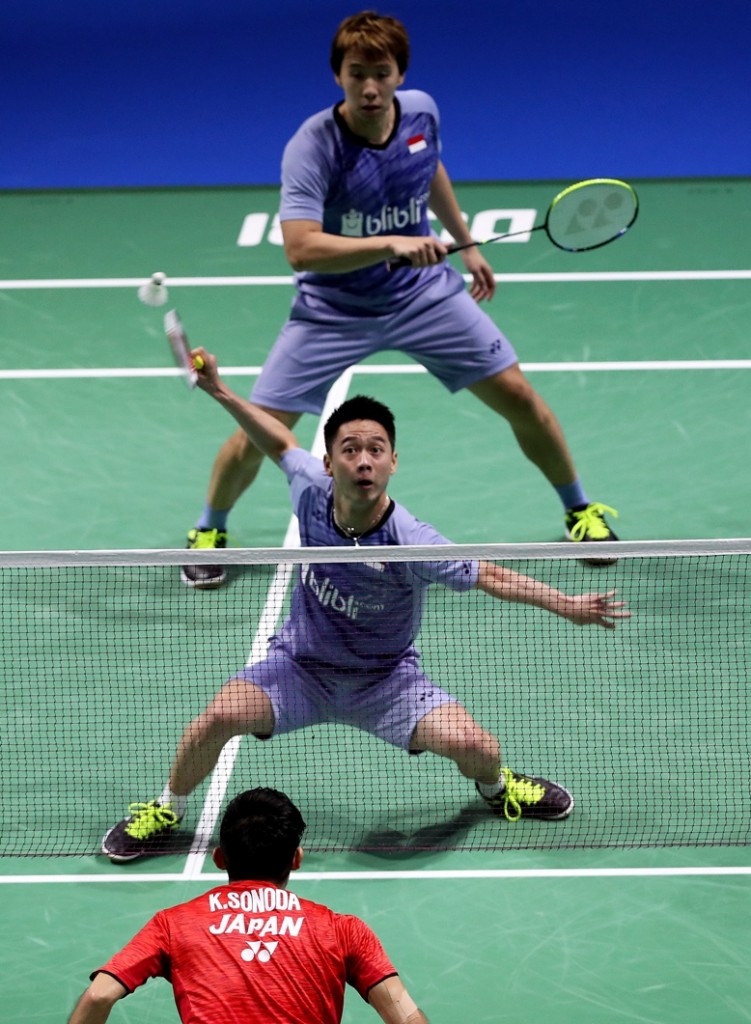 avenge their round-robin loss to the same pair.

He and Gideon were into their stride early, firing winners from all parts of the court, blending thunderous smashes with delicate, angled slices and nifty net shots. The Japanese woke up in the second game and roared ahead. At 19-11, they looked to have the game wrapped up only to be lured into long, languid rallies by the Indonesians who narrowed the gap to 20-18 before hitting wide to trigger a decider. Tense exchanges kept the scores relatively close to 16-16 at which stage Sukamuljo’s guile and speed broke the deadlock as the world No.1 duo powered to the finish with five straight points.

“We will not be satisfied until we win,” declared 26-year-old Gideon, whose lithe movement and jump smashes would have comforted Indonesian supporters, considering he could barely move his neck or left arm earlier this week due to a strain.

“I am feeling a bit better because of therapy but I am still not 100 per cent but I will play my best tomorrow.”

The recently-crowned BWF Male Players of the Year will face World champions, Liu Cheng and Zhang Nan, for the title. The Chinese titans calmly held off a spirited, if inconsistent, challenge from evergreen Danes, Mathias Boe and Carsten Mogensen, winning 21-17 21-16.

“We look forward to playing the Indonesians. They have done well this year and we want to enjoy the match and hopefully win it,” said Liu, whose monster smashes tore holes into Denmark’s defence. 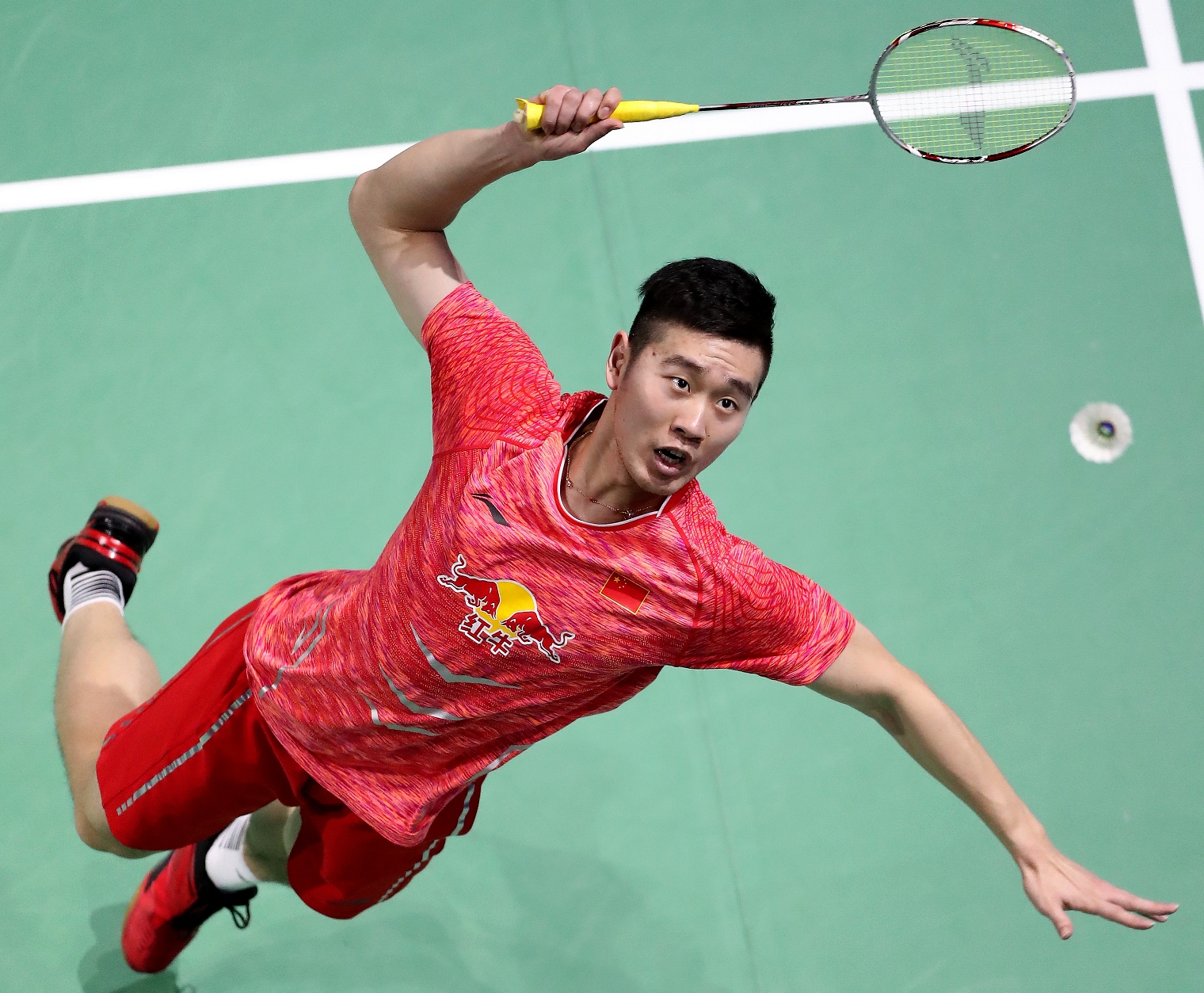 China will have their eyes on the Mixed Doubles prize also. Defending champions, Zheng Siwei/Chen Qingchen, romped to their second successive Dubai showdown, dismissing Tontowi Ahmad/Liliyana Natsir, 21-12 21-17. The Chinese were pleased to beat the Olympic and World champions to whom they have lost some key matches this season, including the World Championships final as well as title-deciders in France and Indonesia.

Across the net from them tomorrow will be Hong Kong’s Tang and Tse whose rising stock soared even higher with a strong comeback versus another Chinese tandem, Wang Yilyu/Huang Dongping. Tse, who was clinical at net in the dying stages of the third game, was almost lost for words in the aftermath of their 18-21 21-18 21-17 success.

“We didn’t expect this. A lot of pairs are more powerful and experienced than us. We just wanted to give our best in this tournament. That would have satisfied us. This proves we are up to world standard,” said the 25-year-old, still absorbing their achievement in their Dubai debut.

“We were nervous in the first game and we tried to do better in the second. Winning Denmark Open gave us a lot of confidence but still we didn’t expect to get to the final here.”