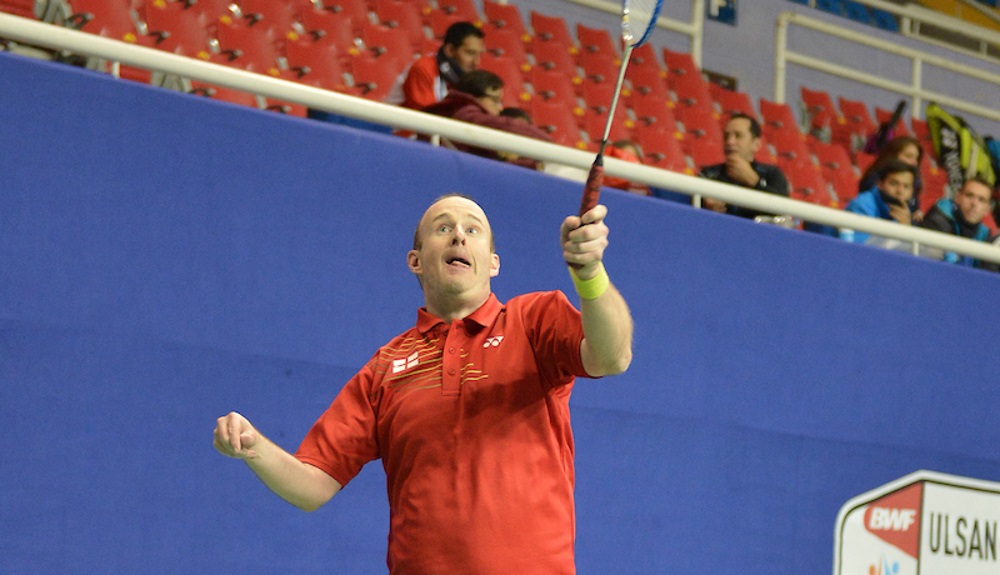 The England Men’s Singles SL 4 player (featured image) had lost his opening Group H match to Indonesia’s Fredy Setiawan and needed to beat Frenchman Paul Edinger to stay in the reckoning to qualify from the group. The task got harder with Forster losing the first game, but he held his nerve to win the next two by a narrow margin, 15-21 21-19 21-18, and came away mighty pleased with himself.

“I had a knee surgery, and had surgery in August. I tore my meniscus plying badminton, when I jumped up. The consultant found there were loose fragments floating, and we had to repair the tear. And this is my good leg, this has to do all the work. Without this knee I couldn’t really move. I was back on court after 4-and-a-half weeks. I was quite nervous, but the last month has been fine.

“This is my first tournament after surgery. It took six weeks to recover. I wasn’t sure if I can compete. I was back playing in September. It’s great to be here. I lost in Mixed Doubles earlier today after holding match point, so it’s nice to get one under my belt.”

Forster is playing his eighth World Championships and is impressed by how much the event has grown: “This time the number of players is huge. Obviously the (Tokyo 2020) Paralympics means a lot. There are a lot of players training full time. I have a full-time job, so keeping up is not easy.” “I’m improving day by day,” said the Turkish youngster. “This experience will help me for the road to Tokyo. “I’ve been playing for three years. I started playing when my doctor advised me to play badminton. I had disability on the left side, and the doctor felt this sport was good for me. I now believe I can do anything. If I believe in myself and work hard, I can do good things. I look up to my teammate Ilker Tuzcu (MS SU 5) and admire Lin Dan and Lee Chong Wei.”

There were few surprises in the day’s results, with only a couple of upsets. Women’s Singles WH  1 second seed Son Ok Cha (Korea) fell victim to China’s Li Hongyan, 21-10 21-2.