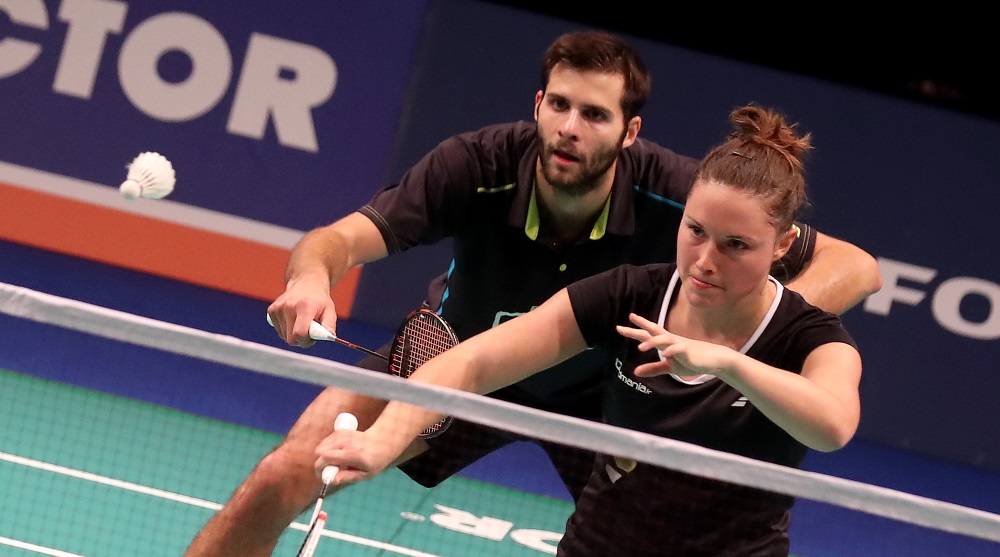 It was the perfect run-up to their home Superseries. Ronan Labar and Audrey Fontaine’s stunning upset of China’s Lu Kai and Huang Yaqiong last week in Denmark meant that they head in to the Yonex French Open starting today brimming with confidence. The French Mixed Doubles pair (featured image), currently ranked No.31, beat the World No.2 duo in two thrilling games in the second round of the DANISA Denmark Open last week. That the French were undeterred despite missing seven match points spoke a lot about their newfound composure under pressure.

“Before, we knew were capable of this game, but now we know what’s possible,” said Ronan Labar. “So that’s a huge difference. We know we can beat everyone now. It’s a big step for us. We’re not afraid of anyone. The others also know that, so that can make them a bit insecure against us. We’re confident starting in the first round here; I feel positive. I hope we are able to enjoy the game.

“Against Lu and Huang we played extremely smart; we prepared for the game and we managed to play like that; even if sometimes we thought we had to change, we just stayed in it and that’s what made us win the close points at the end.”

The 28-year-old grew up in the south of France. As the son of sports teachers, Labar played several sports – tennis, handball, swimming, rugby – before taking up badminton seriously. Having moved to the national centre in 2008, he experienced his first French Open only a year later.

“I started badminton quite late, when I was ten, and started playing tournaments when I was 13 or 14. This tournament wasn’t a Superseries, and I was living in the south of France so it was far for me to come and watch.

“It’s quite a nice hall, I love to play here, I’ve been playing here since 2009. The crowd is near the court; we can hear family and friends, and we can recognise their voices. It’s very nice when you’re playing in your home country. The French duo’s form this season gave little hint that they would surprise Lu and Huang. Their biggest result was their bronze medal-winning run at the European Championships in April, followed by semi-final finishes at the Spanish and Belgian Internationals.

“The biggest moment was the European medal. It’s an achievement because everyone in France wanted the European medal. Now, beating Lu and Huang is amazing because it shows us that we can get to a Worlds final or something. We know that at the moment we’re able to do it one time a year, but we have to work to do that every month or every week, why not?”