Already celebrating gold in Mixed Doubles, hosts Indonesia gave themselves a shot at triple glory on home turf, winning four of their five semi-finals today at the Blibli.com Yonex-Sunrise BWF World Junior Championships 2017 – all of which were against Chinese rivals.

By contrast, having begun the day with the potential of sweeping the individual titles, badminton’s leading nation won just two of its eight semi-finals and will have only Han Yue in Women’s Singles and Men’s Doubles tandem, Di Zijian and Wang Chang, carrying China’s aspirations for gold in Yogyakarta.

The day began ominously as they lost both Mixed Doubles matches to host pairs and it became progressively worse as crowd favourite, Gregoria Mariska Tunjung, held off a dogged Cai Yanyan (22-20 13-21 21-18) to assure Indonesia of at least silver in the Women’s Singles and thwart an all-China showdown. The No.3 seed started well; faltered in the middle but came back with a vengeance in the second half of the third game to win 22-20 13-21 21-18 on her third match point.

“When I was down 5-11 in the decider, I kept telling myself the match is not over yet and I’m not going to give her points easily. I made a lot of mistakes before but, after the interval, I just tried to keep the shuttle in play, regardless of where it went. I am happy to be in the final,” declared Tunjung, still battling the remnants of flu.

At that stage, Han Yue had already grabbed the other place in the Women’s Singles final, recording China’s first win of the day. She stormed past Goh Jin Wei, 21-9 21-10; the Malaysian later explaining she was “scared” because of pain in her right knee when she lunges and jumps.

Following Han on court 2 was her Men’s Singles team-mate Gao Zhengze who had beaten all-comers thus far, both in the team and individual events. However, all of a sudden, he looked uncertain and a shadow of himself. Across the net was top seed, Kunlavut Vitidsarn, a player who runs into trouble trying to do too much sometimes but who today was on his ‘A’ game. Having wriggled out of some scrapes en route to the last four, Thailand’s lone hope wasn’t about to throw away his crack at gold and he duly put paid to Gao’s dreams, 21-16 21-13. “I tried not to pressure myself. I felt more relaxed than in previous matches and I am really happy to be in the final,” declared the 16-year-old.

By then another nightmare had started unfolding for China on centre court as the Sugiarto tandem – Jauza Fadhila and Ribka – seized the opening game in their Women’s Doubles clash against Xia Yuting/Zhang Shuxian. The No.4 seeds suffered a setback in the second game but raised their standard – and with it the decibel level – in the decider as they cantered away from their rivals, 21-17 19-21 21-11. It ensures Jauza Fadhila will add a medal of a greater kind to the bronze she won in Bilbao last November.

At this point the overall tally read Indonesia four out of four wins while China was reeling from one victory in six semi-finals. They had two 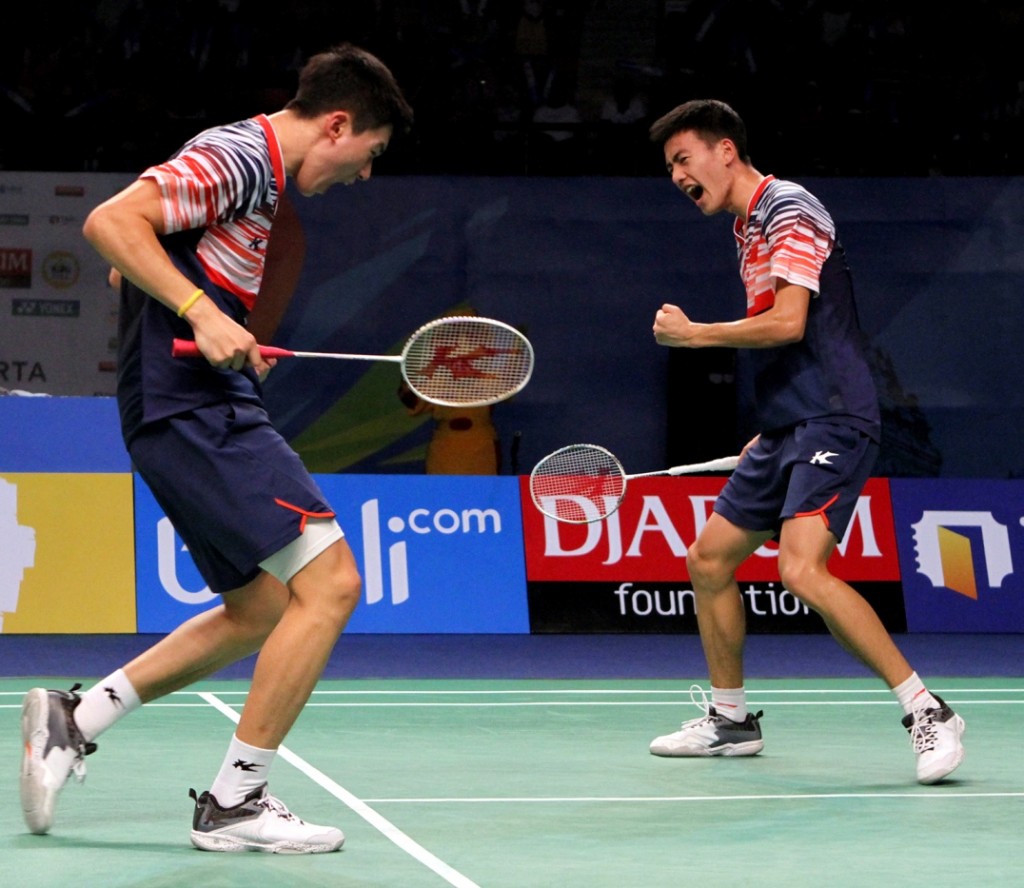 opportunities remaining in Men’s Doubles and then Women’s Doubles; their opponents being Indonesia and Korea respectively. Having already battled into the Mixed Doubles final, Rinov Rivaldy was keen to do likewise in Men’s Doubles but he and Yeremia Erich Yoche Yacob were outgunned by Di and Wang in straight games (21-15 21-17).

“We didn’t play our best but we are grateful to be in the final and we will try to play better tomorrow and win for China,” said Wang.

Having both lost their respective Mixed Doubles semi-finals, Li Wenmei and Liu Xuanxuan were hoping to make good in Women’s Doubles and up to late in the second game the Chinese pair seemed like they might do so. It was not to be though as, having seen all their team-mates perish, Baek Ha Na and Lee Yu Rim were determined Korea would have a say in one final. As Indonesian fans took them to heart and cheered their every point loudly, the Koreans grew in confidence and wrested the ascendancy from Li and Liu, prevailing 17-21 21-18 21-13 in the afternoon’s last semi-final.

“It was so loud. We felt like we were fighting for Indonesia. In the first game, China was smashing hard. We strengthened our defence and began taking more chances in attack and we got control of the match while the Chinese were under pressure,” said Rim, clearly relieved not to let her country down. 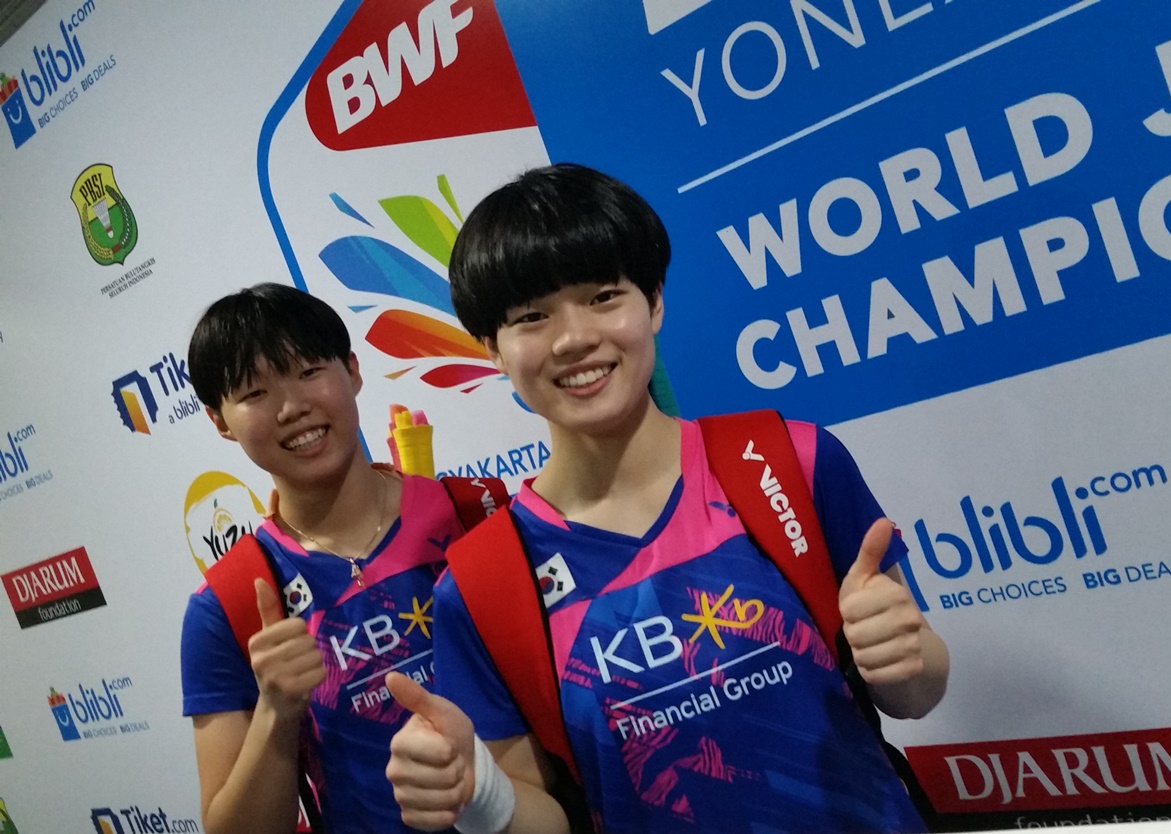 Earlier, she had watched her Men’s Doubles peers and No.1 seeds, Kang Min Hyuk/Kim Won Ho, be the victims of mounting pressure, succumbing to Japan’s Mahiro Kaneko/Yunosuke Kubota, 19-21 21-17 21-19. While the latter celebrated a hard-won triumph, their Men’s Singles peer, Kodai Naraoka, was left to ponder how his fortunes unrivalled in a few blinks as he squandered three game points versus Leong Jun Hao. If there were any questions about the young Malaysian’s mettle, he showed his fortitude as he clawed back from 17-20 down to rattle off five straight points and leave his dazed rival speechless at the 21-14 22-20 result.

Eventually, Naraoka muttered that carelessness had cost him while a buoyant Leong, being hugged by his proud parents, said the key was not to put pressure on himself and to seize the initiative when the opportunity arose.

“I think he (Naraoka) felt pressure when it got to 20-19 and I decided to take my chance,” said the 17-year-old who soared high for a thunderbolt smash to finish the match.

Earlier, Indonesia’s Mixed Doubles coach Nova Widianto basked in the spotlight as two of his best partnerships confirmed gold for Indonesia in that discipline. Rinov Rivaldy and Pitha Haningtyas Mentari will oppose their younger team-mates, Rehan Naufal Kusharjanto and Siti Fadia Silva Ramadhanti, in the final.

“Our target was to reach the semi-finals but, as the hosts, we are eager to win here. Now they have set an all-Indonesian final. Whoever is better prepared mentally, will win tomorrow,” he said of the showdown. 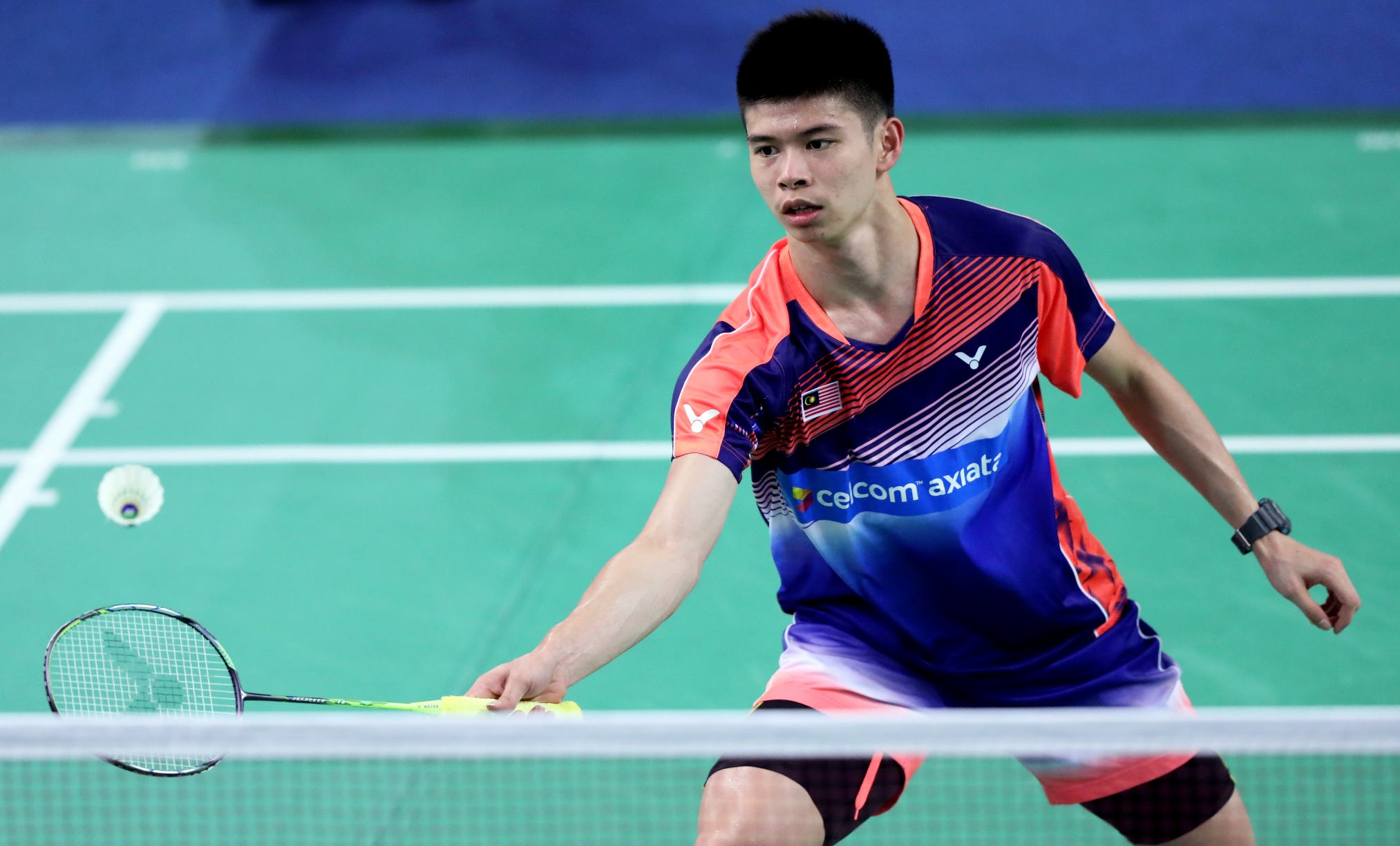 It will be an all-Indonesia final in Mixed Doubles as Rinov Rivaldy and Pitha Haningtyas Mentari also won their semi-final against Liu Shiwen and Li Wenmei, 18-21 21-16 21-13.