A son following in his father’s Mixed Doubles footsteps and a blossoming Women’s Singles athlete, with some prized scalps to her credit already, are among those players bearing the weight of national expectation as Indonesia starts its campaign in the Blibli.com Yonex-Sunrise BWF World Junior Championships 2017.

Thrust into the spotlight by Indonesian team manager Susy Susanti at today’s pre-tournament press conference, the likes of Rehan Naufal Kusharjanto, Siti Fadia Silva Ramadhanti and Gregoria Mariska Tunjung have pledged to go all out to secure a medal for the hosts in the Suhandinata Cup team tournament – the BWF World Mixed Team Championships – as well as to seek glory in the individual competition which follows.

Having been singled out by Susanti as the spearheads for Indonesia’s potential success in Yogyakarta, Kusharjanto – son of Indonesian Mixed Doubles Olympic silver medallist, Tri Kusharjanto – and Ramadhanti said they hope to replicate their victory in this year’s Badminton Asia Junior Championships on home soil.

However, the pair are being cautious about their aspirations over the next two weeks.

“I don’t want to think too far ahead. I want to take things step by step. There is a lot of responsibility and pressure on us in the team event and I want to use it as motivation. We have to be careful,” said Kusharjanto. 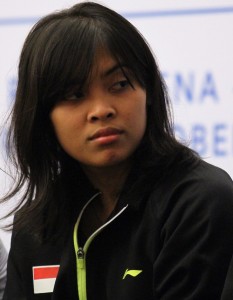 “I am watching teams like Korea, Japan, Thailand, India and Taipei.”

His partner, Ramadhanti, will be pulling double duty for her country, also competing in Women’s Doubles alongside Agatha Imanuela. They too were named by Susanti among Indonesia’s hopefuls in both the team and individual events.

“We have a good opportunity as hosts, especially as we will have the full support of home fans. I believe our main contenders will be in Women’s Singles, Women’s Doubles and Mixed Doubles,” said Susanti, the PBSI High Performance Director.

“We are eager to win the Suhandinata Cup as (Suharso) Suhandinata was the father of Indonesian badminton and badminton is an important sport in Indonesia. Our first goal though is to reach the semi-finals.

“We were the runners-up at this year’s Asia Junior Championships. We had our chance to win but maybe we were unlucky. We hope we can be champions this time.”

Meanwhile, 18-year-old Women’s Singles specialist, Tunjung, is quietly confident that her top-flight experience in Uber Cup, Sudirman Cup and the Superseries will stand her in strong stead versus the likes of China’s Han Yue – the Asian Junior champion – and 2015 World Junior winner, Goh Jin Wei of Malaysia. Before the individual fireworks, however, she is keen to play her part in a team triumph.

“I want to deliver for the team. It is my last year in the juniors and I hope we can get to semi-finals and then take it from there. I think my experience of playing in the qualifying rounds and main draws of the Superseries has helped me develop and I am well prepared for this tournament.”

Seeded second in the 45-team Suhandinata Cup tournament, Indonesia’s quest for supremacy begins against Brazil at noon tomorrow. On Tuesday, the hosts will play the other team in Group H1, Mongolia; also at 12 noon.