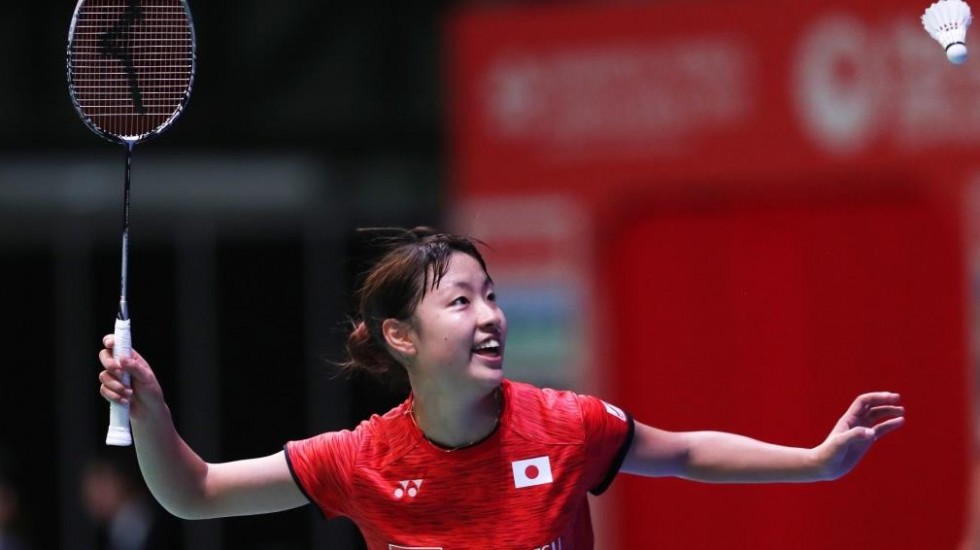 Revelling in the loud support she received from her countrymen who packed Tokyo Metropolitan Gymnasium for the second-round clash, the 22-year-old World champion (featured image) did not disappoint, bossing her way to 21-18 21-8 triumph that edged her in front 5-4 in the head-to-head versus the Indian. 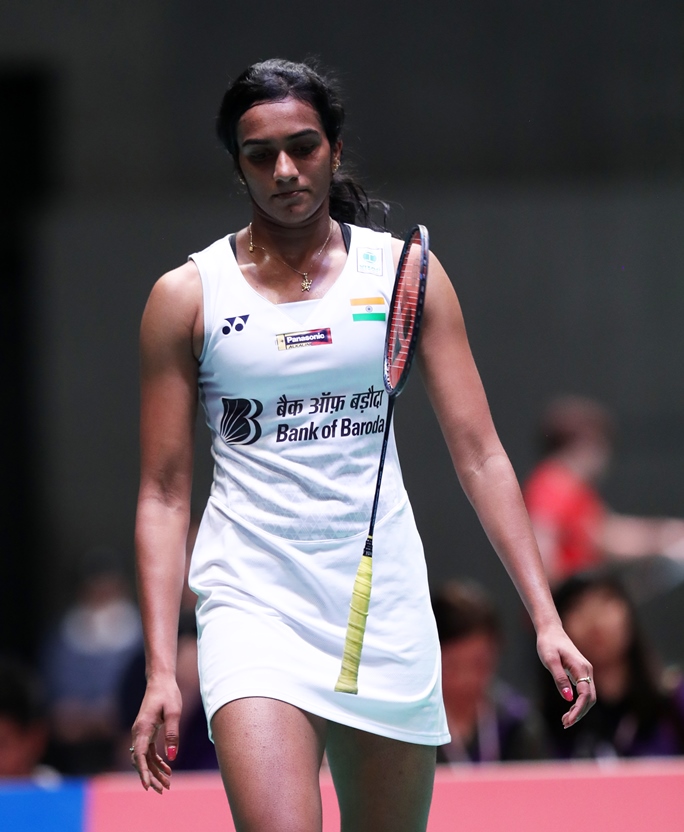 Following two epic battles – last month’s World Championships final and last Sunday’s title match in Korea – the third instalment of the exciting rivalry between the young Women’s Singles stars fizzled out after a crucial turning point in the dying stages of the first game. Both players later underlined the importance of that moment.

Holding a precious 18-16 lead, Pusarla suddenly – and inexplicably – committed four unforgiving errors, repeatedly putting the shuttle into the net; thereby undoing all the hard work she had done to get the ascendancy while catapulting Okuhara to a 20-18 advantage. Seizing the momentum shift against her frustrated opponent, the hometown favourite duly converted game point, soaring at net to smash emphatically.

The die had been decisively cast!

A calm and composed Okuhara flourished thereafter. She could do little wrong while just about everything Pusarla tried came to nought, even a routine smash, right on top of the net with Okuhara hopelessly stranded, cannoned into the netting. Pusarla could not believe she missed that sitter!

That gave the Japanese a healthy 13-4 buffer as murmurs rippled across the arena. Despite supporting Okuhara, spectators were clearly disappointed the match did not live up to the thrilling vein of the players’ most recent tugs-of-war. The end came swiftly and, ironically, it was another weak Pusarla stroke into the net that concluded matters.

She was out and a triumphant Okuhara – arms in the air – would live to fight another day.

“I know the Japanese crowd had high expectations but I knew Sindhu could have won. We had very close battles in the World Championships and in Korea but today I won in straight games. I think playing at home in this atmosphere was significant and I am thankful to the crowd,” stated the jubilant winner who now faces Beiwen Zhang of the USA. 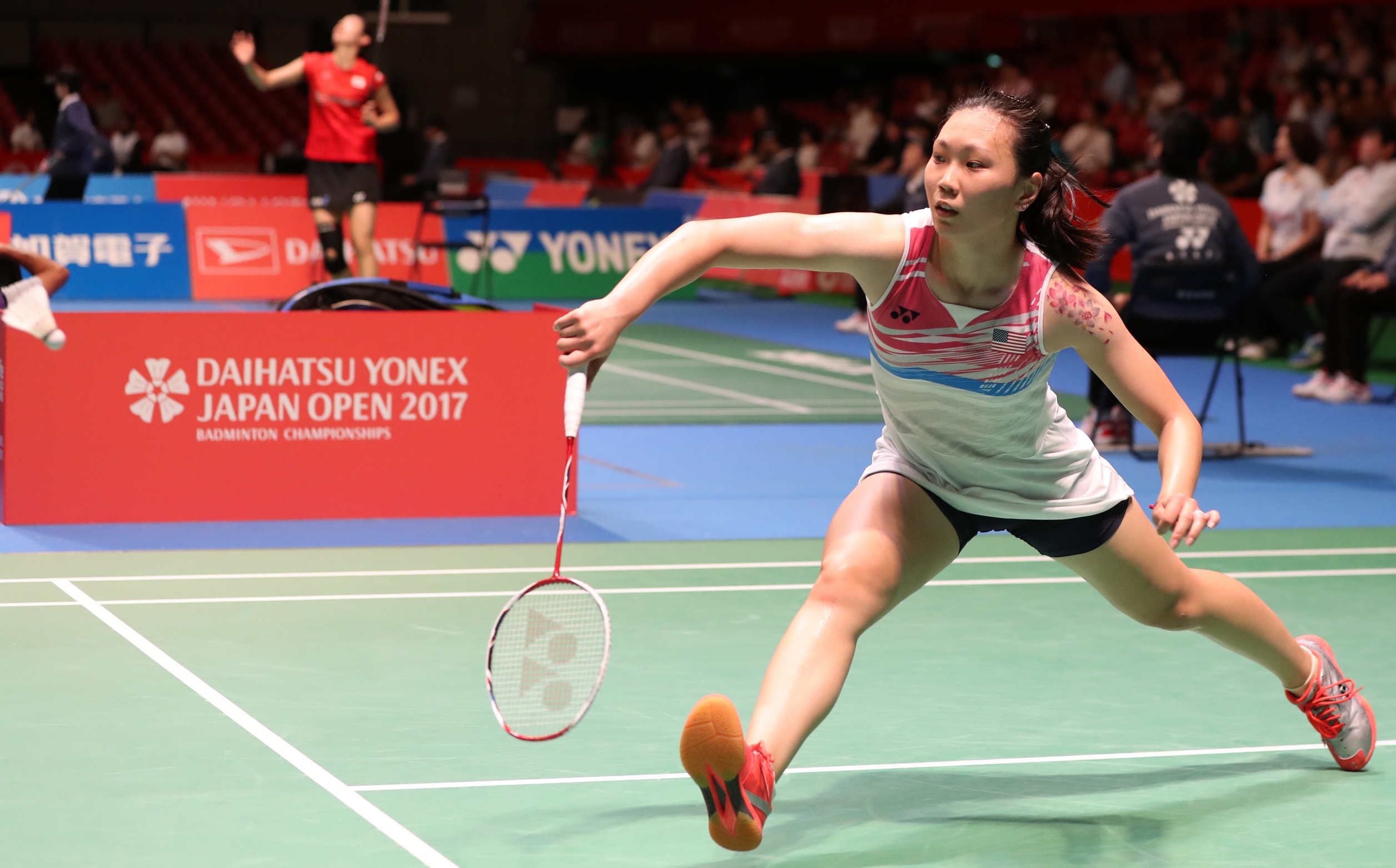 “Sindhu has very strong shots and is very attacking and powerful, but I was able to respond to her attack and be persistent in my play.”

Regarding her rival’s four consecutive errors which turned the first game her way, Okuhara said that “probably put pressure on Sindhu” and reminded that she suffered a similar fate in the first game of their Korea clash as Pusarla won four straight points from 18-20 down.

“I just couldn’t give my best. I tried but I made too many unforced errors. Those four mistakes at the end of the first game were very crucial and they kept playing on my mind. I was trying to play safe but I was nervous because my shots kept going into the net,” explained a candid Pusarla. 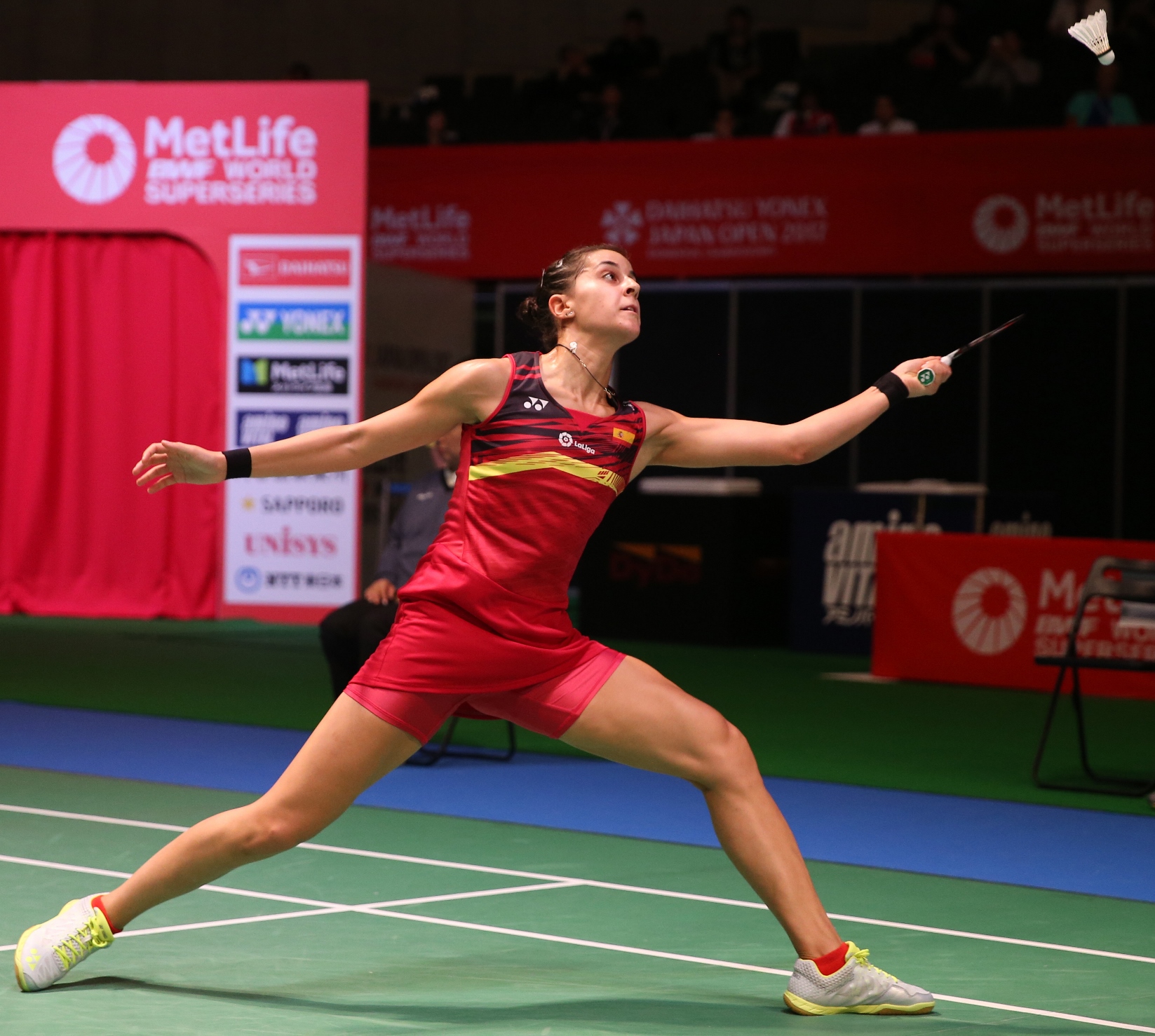 It was a doubly bad afternoon at the office for India as Saina Newhal also crashed out versus a sizzling Carolina Marin who unleashed the full fury of her racket in a near-flawless display – 21-16 21-13 – that was even applauded by the player across the net.

“She played very well. Her shots were falling quite steeply. Everything was going well. Whatever she was playing was perfect, to the lines and so on,” said Nehwal, adding that she did not adjust to the pace at which the Spaniard was playing.

Marin, who rebounded from a 10-14 deficit in the opener, was obviously pleased with her performance.

“It was a really good match for me and I am looking forward to playing (Akane) Yamaguchi. It will be tough. She fights for every point and I will need to be 100 per cent against her,” said the Olympic gold medallist.

The host nation will feature in the other two Women’s Singles quarter-finals also with Sayaka Takahashi taking on defending champion He Bingjiao of China while He’s team-mate Chen Yufei faces Aya Ohori. 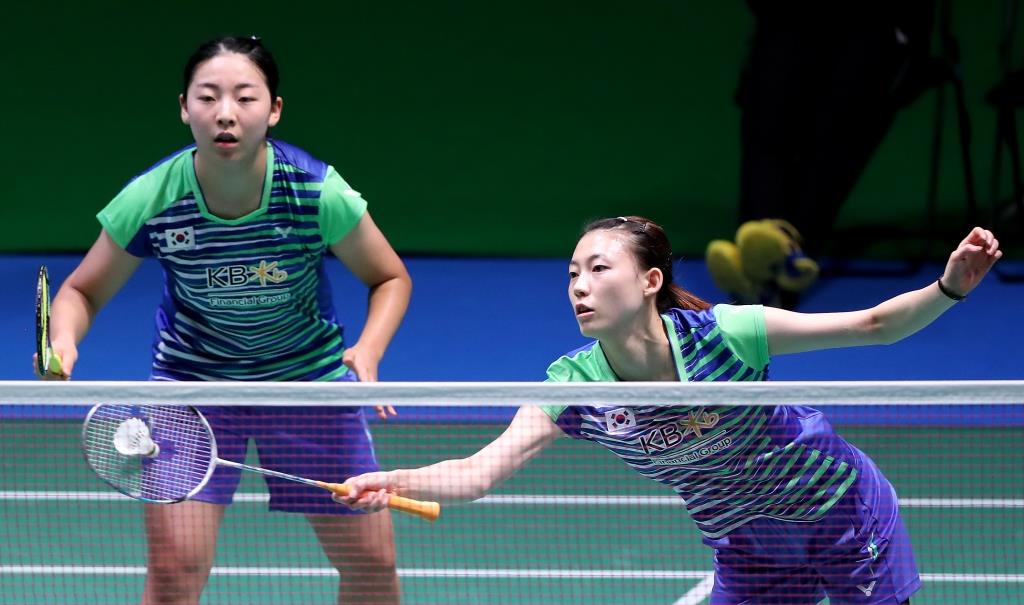 In Women’s Doubles, the title will go to either Japan or Korea with five home pairs, including Olympic champions Misaki Matsutomo/Ayaka Takahashi, and three Korean pairs making the quarter-finals.

Led by Mathias Boe/Carsten Mogensen, Denmark has three contenders for the Men’s Doubles title, with Mads Conrad-Petersen/Mads Pieler Kolding and Kim Astrup/Anders Skaarup Rasmussen also advancing. The latter were locked in a tense clash with Thailand’s Bodin Isara/ Nipitphon Phuangphuapet when Isara retired due to injury, with the score at 21-16 22-22 to Astrup/Rasmussen who now face Indonesia’s Marcus Fernaldi Gideon and Kevin Sanjaya Sukamuljo for a semi-final spot. 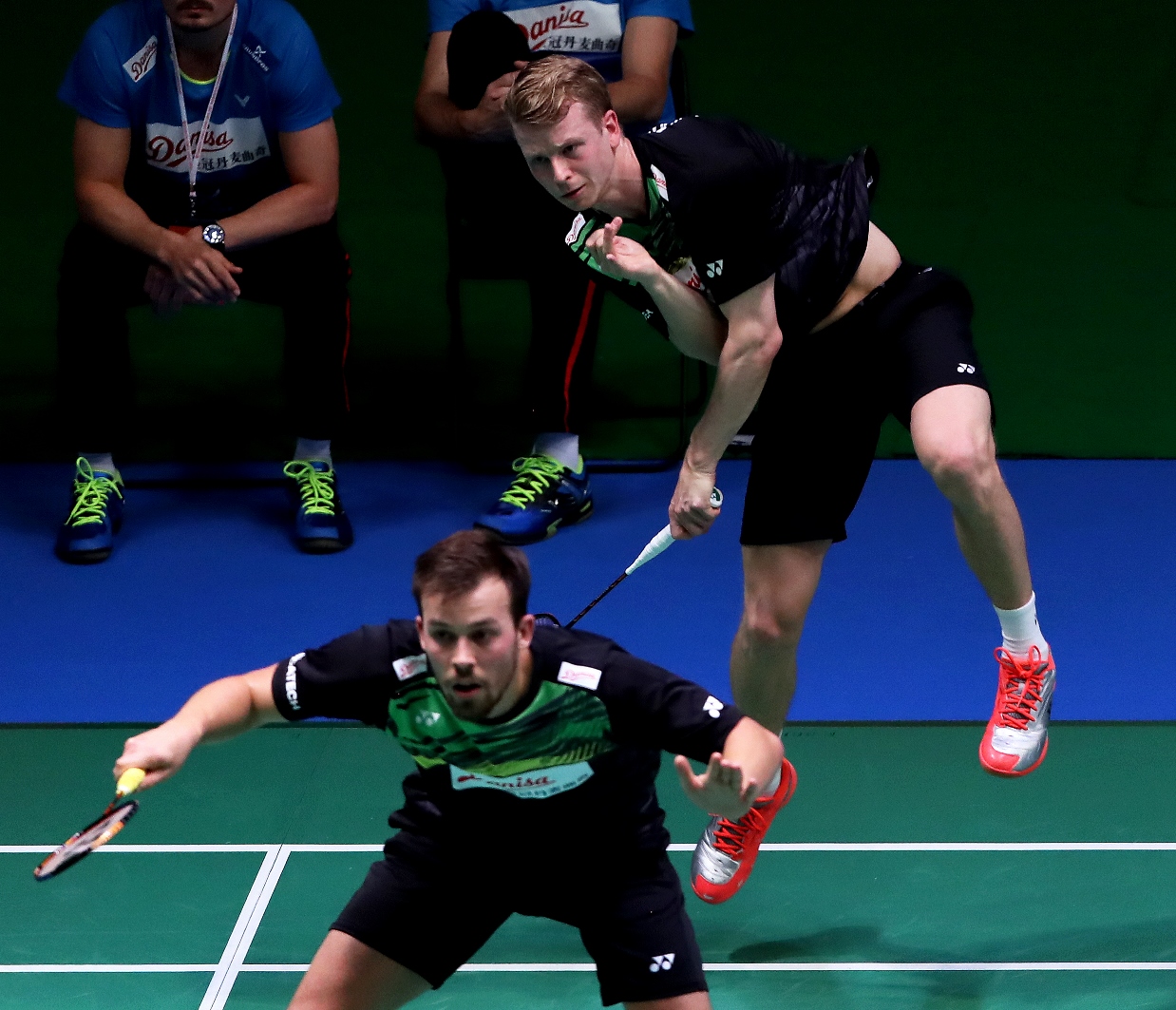