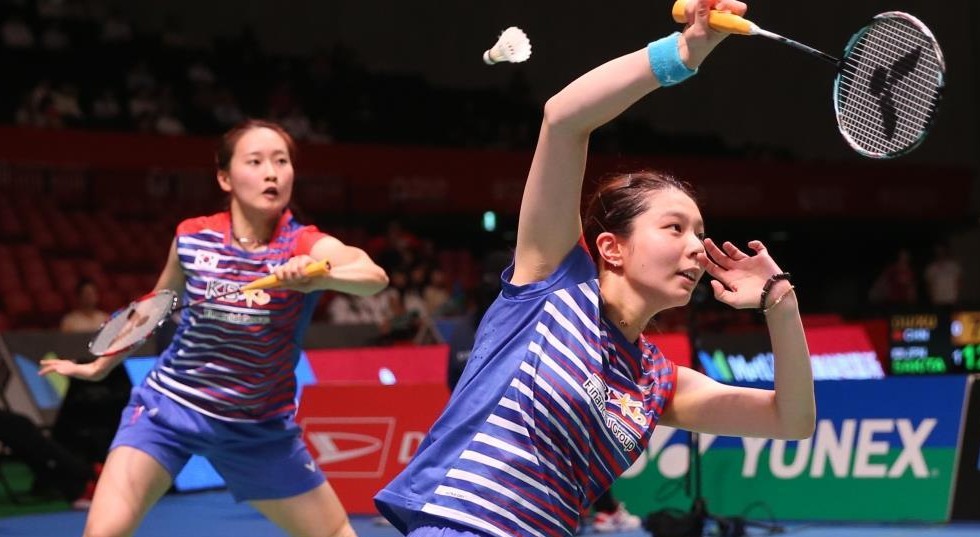 The demise of the Women’s Doubles defending champions and the World champions, tonight rocked the DAIHATSU YONEX Japan Open 2017.

Having squeezed out victory versus the same opponents last week, Kamilla Rytter Juhl and Christinna Pedersen were not so fortunate the second time 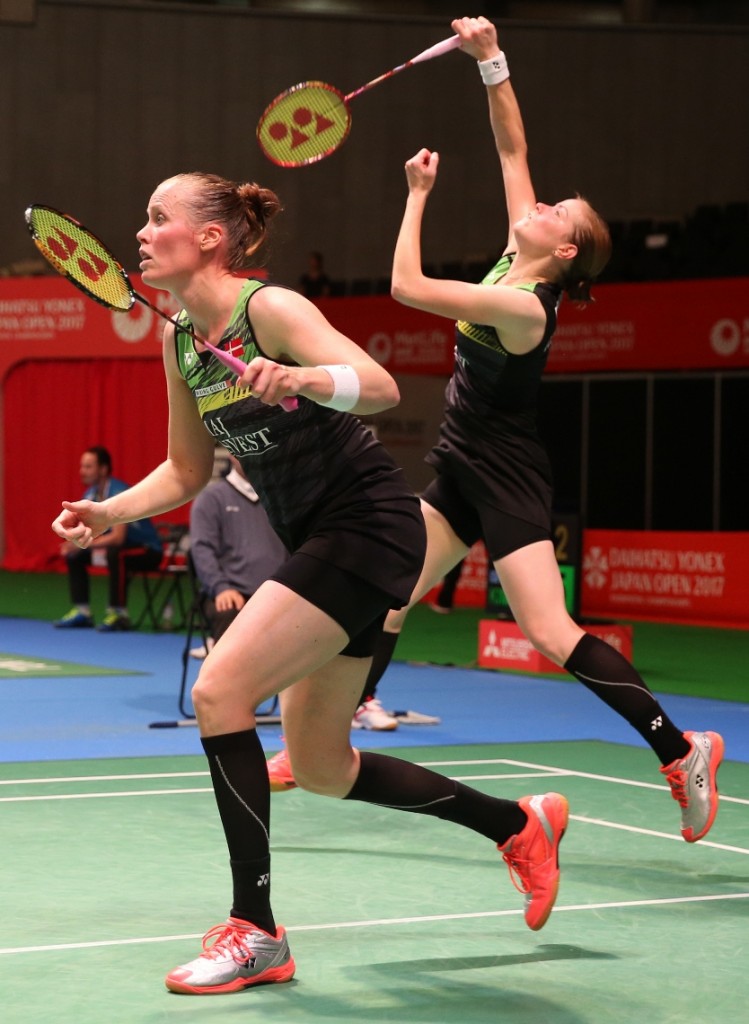 Saving two match points in the decider, the Danes ultimately perished as Kim pushed a quick, flat return to Juhl’s serve to secure a hard-fought triumph.

“We were determined not to lose to them again and we focused on the shuttle. They seemed frustrated from time to time and we capitalised on that,” said a jubilant Chae.

Admitting they were not at their best, the European No.2 seeds said they relied heavily on their fighting spirit to carry them.

“We fought from the start. We know the Koreans are playing solidly at the moment. We barely won against them last week,” said a disappointed Juhl.

“We didn’t feel comfortable on court. The conditions were difficult and tricky so we had to stick to plan B which was our fighting spirit. It was almost enough today.”

On a neighbouring court, it took Japan’s Misato Aratama and Akane Watanabe just 38 minutes to stun China’s World champions, Chen Qingchen and Jia Yifan. The No.4 seeds were tamed, 21-18 21-19, much to the delight of noisy and clearly knowledgeable home fans. Earlier, there

The carnage nearly extended to Men’s Doubles as World champions, Liu Cheng and Zhang Nan, hauled themselves back from the precipice of defeat, withstanding four match points.

Indonesia’s Berry Angriawan and Hardianto Hardianto had the finest moment of their partnership within grasp but failed to convert their opportunities to seal victory in straight games. A nervous-looking Hardianto erred at crucial junctures, failing to show the incisive play that had paid off so handsomely, to keep China in with a sniff – and that proved deadly. 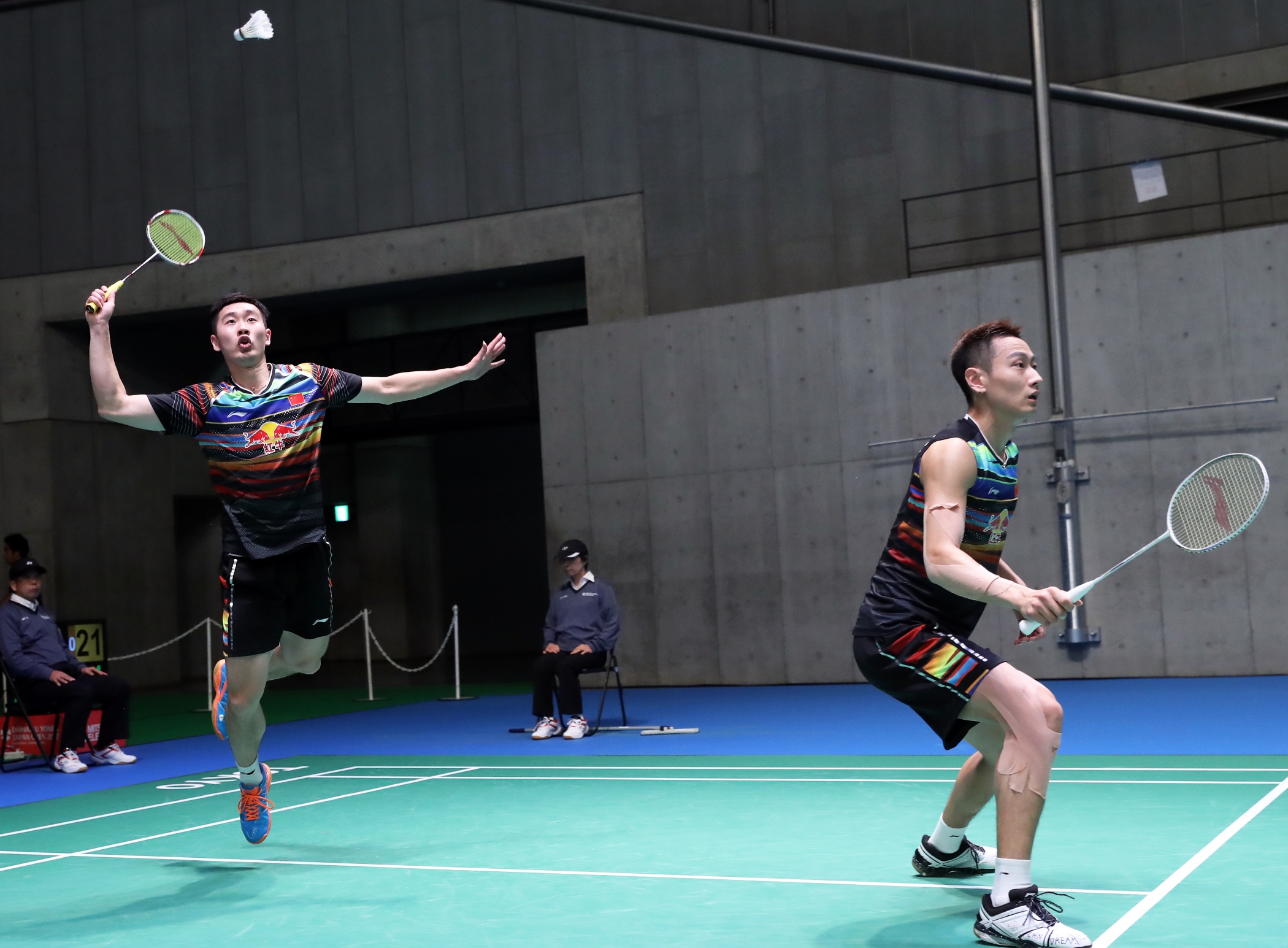 Seizing the lifeline gifted to them, the Liu-Zhang combination found another gear in the third game to motor away as the Indonesian challenge wilted. Berry flicked a backhand wide to affirm the outcome in China’s favour: 15-21 24-22 21-13.

“We were struggling and they were playing well. We couldn’t find our rhythm but, step by step, we got into the match. Once we got to the third game, we were confident of winning,” said the experienced Zhang.

The beaten Berry admitted he and his partner failed to buckle down mentally when it came to the match points.

“We played well and this was a big opportunity to win. We are very disappointed to lose and to make mistakes at important times. In the third game, the Chinese improved while our standard dropped,” said the Indonesian.

Meanwhile, two trans-national pairs advanced to the Men’s Doubles second round as Korean veteran, Yoo Yeon Seong, and Lim Khim Wah of Malaysia got the better of Thailand’s Kittinupong Kedren and Dechapol Puavaranukroh (17-21 21-13 21-16) while Hendra Setiawan of Indonesia and Malaysia’s Tan Boon Heong beat Chinese Taipei’s Chen Hung Ling and Wang Chi-Lin (22-20 21-18). In only their second event together, both Yoo and Lim expressed surprise to win a match so soon, adding they are just “going with the flow” and see how their partnership develops.

In singles, both defending champions – Lee Chong Wei of Malaysia and China’s He Bingjiao – kept their hopes of repeating intact. Lee flirted with danger against Hong Kong’s Wong Wing Ki, eventually prevailing 21-15 16-21 21-17 while He routed Japan’s Sayaka Sato, 21-9 21-10, in their Women’s Singles encounter. There was also a good win for Chinese Taipei’s Hsu Jen Hao who triumphed over No.6 seed, Ng Ka Long of Hong Kong (14-21 21-18 21-15) in Men’s Singles.

The headline news though was the confirmation of the much-anticipated blockbuster between Nozomi Okuhara of Japan and India’s Pusarla V Sindhu after both advanced to the second round. The latter was put through another significant test by Okuhara’s team-mate, the dogged Minatsu Mitani, but increasingly asserted herself for a 12-21 21-15 21-17 victory.

Having avenged her World Championships heartbreak at the hands of the diminutive Okuhara with success in their Korean final last Sunday, Pusarla is hoping the scores of fans who flocked to support her tonight will return in greater numbers tomorrow.

“I didn’t expect so many Indians to come and cheer for me,” she marvelled. “I really want to thank all of them. Hopefully, there will be many more tomorrow.”