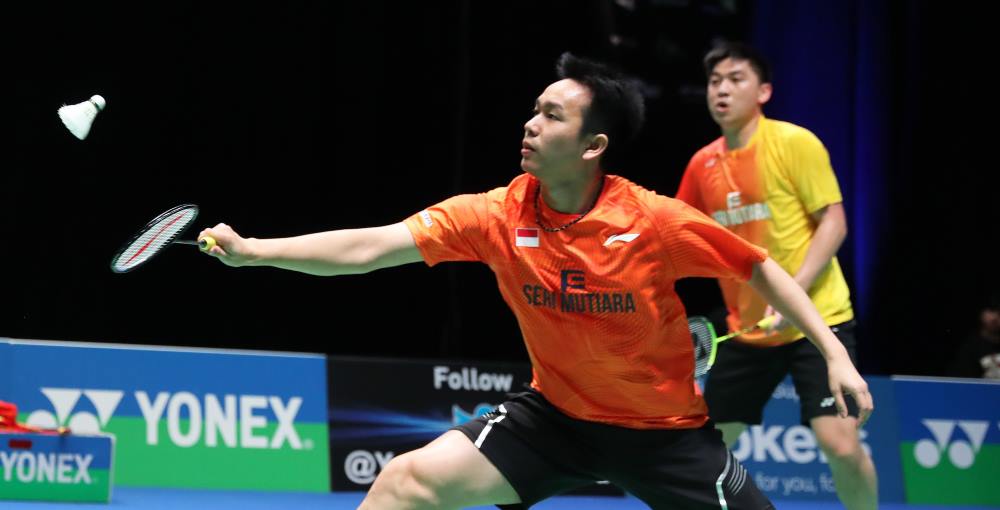 Hendra Setiawan and Tan Boon Heong’s strong run at the Crown Group Australian Open saw them climb into eighth spot on the Destination Dubai Rankings – further validation that the veteran pair still have aces up their sleeve. The Indonesian-Malaysian pairing are the most distinctive duo in Men’s Doubles, continuing to delight their fans in their new innings together. Having plied their trade for their respective countries with distinction for many years, the two came together in January this year as a rare trans-national partnership. Whatever wrinkles there might have been early on have slowly been ironed out, as the two finally achieved their biggest result in Australia.

Starting out in the qualifying rounds, Setiawan and Tan worked their way forward, recording three second-round finishes – in India, Singapore and Indonesia – before their impressive run in Sydney – which saw them beat the likes of Japan’s Takuto Inoue/Yuki Kaneko and China’s Liu Cheng/Zhang Nan.

“I hope there will be more pairs like us,” said Tan, “It will be good for the sport.”

The leaders in the race to Dubai are Li Junhui/Liu Yuchen who have 44,220 points from six World Superseries. The Chinese duo started off with a runner-up place at the Yonex All England, made the semi-finals in India and quarter-finalists in Malaysia, before finishing runners-up once again, in Singapore. They avenged their Singapore Open final loss to Denmark’s Mathias Boe/Carsten Mogensen in the next Superseries final, the Indonesia Open.

China have one more pair in the top ten – Liu Cheng and Zhang Nan, who were semi-finalists at three events and were rewarded for their consistency with fourth spot in the rankings. The pair that dominated early in the season was Indonesia’s Marcus Fernaldi Gideon/Kevin Sanjaya Sukamuljo, who are at No.2. Three straight Superseries titles – England, India and Malaysia – showed that the diminutive Indonesians were in a league of their own. Their sheer talent and exuberance has enthralled spectators, and the upcoming World Championships will be an early test of whether they can translate their Superseries heroics on to a bigger stage. Takeshi Kamura and Keigo Sonoda (No.3) enjoyed their first Superseries win of the season in Australia, beating Setiawan/Tan in the final. The Japanese were semi-finalists in Malaysia and quarter-finalists in England, Singapore and Indonesia, and they will go to Glasgow full of confidence having added a Superseries title to the one they claimed in Hong Kong last year.

Indonesia’s Angga Pratama/Ricky Karandasuwardi (No.5) had an uneven season, falling in the early rounds of four Superseries. Their best came in India, where they made the final beating China’s Li/Liu in the last-four. Having failed to solve the puzzle of their compatriots Gideon/Sukamuljo in their third clash in Superseries finals, Pratama/Karandasuwardi veered a bit off course; a quarter-final in Singapore being the only other bright spot.

Lee Jhe-Huei/Lee Yang have been part of the resurgence of Chinese Taipei’s Men’s Doubles. The duo are currently enjoying their best ranking, at No.9 in the BWF World Rankings. Among their victims were Mathias Boe/Carsten Mogensen (Denmark) in India and China’s Chai Biao/Hong Wei in Indonesia. Three Superseries quarter-finals – in India, Singapore and Indonesia – helped them garner most of the 25,050 points that places them at No.6 in the Destination Dubai Rankings, above compatriots Lu Ching Yao/Yang Po Han (No.9) and Chen Hung Ling/Wang Chi-Lin (No.18). Denmark’s Boe and Mogensen (No.7) got better as the season progressed, recovering from their first round loss in England and second round loss in India to win the Singapore Open and finish runners-up in Indonesia. The Danes had a brilliant run in Singapore, beating Kamura/Sonoda and Gideon/Sukamuljo on their way to the final, in which they blew away Li Junhui/Liu Yuchen 21-13 21-14.

They sustained their form into the Indonesia Open, but this time Li/Liu got the better of them in the final in three close games. Like their compatriots Lee Jhe-Huei/Lee Yang, Lu Ching Yao/Yang Po Han also enjoyed a strong season, achieving their career-best ranking of 13 on the BWF World Rankings. Strong performances at the Grand Prix Gold translated into success at the Superseries as they followed up four straight second round performances with a semi-final finish in Australia, en route to which they upset second seeds Li/Liu. Their exploits in Sydney saw them jump six places into No.9 on the Destination Dubai Rankings.

In tenth spot are Denmark’s Mads Conrad-Petersen/Mads Pieler Kolding, who went off the rails after a sound start. The Danes were semi-finalists in England and India but then fell to opening round losses in Malaysia, Singapore and Indonesia.

The MetLife BWF World Superseries season will resume in September with the Victor Korea Open. Six more Superseries remain to be played, following which the top eight finishers in each of the five categories will be invited to play the Dubai World Superseries Finals in December at Hamdan Sports Complex.