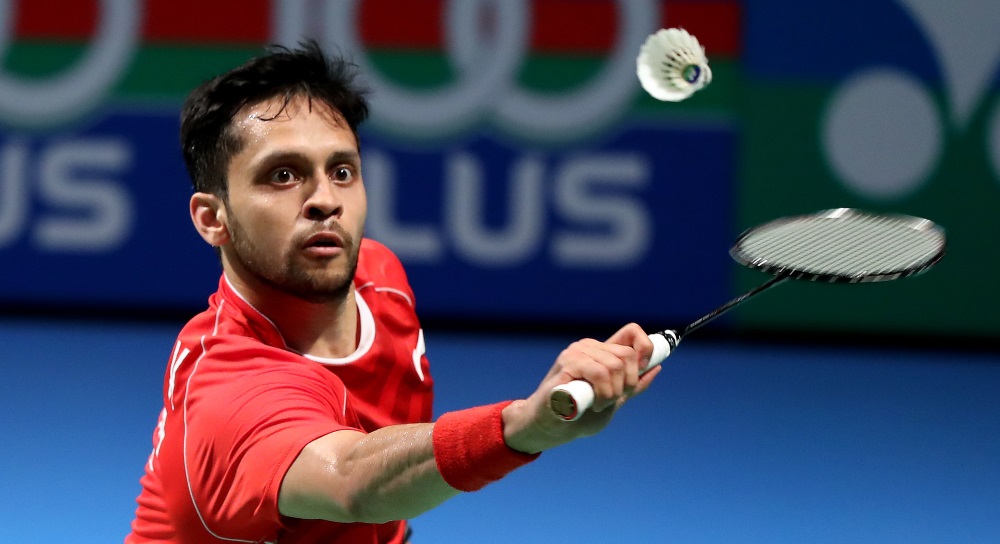 Just over a day after experiencing his first World Superseries final, Japan’s Kazumasa Sakai crashed out of the qualifying rounds of the CROWN GROUP Australian Open 2017 today – an illustration of the intensity of competition of contemporary badminton.

Sakai had performed exceptionally in Jakarta, finishing runner-up, but today in Sydney he was outclassed by the wily Indian Kashyap Parupalli, who scripted his own remarkable comeback after three months spent recovering from a dislocated shoulder.

Parupalli (featured image), a former top-ten player who has been troubled by injuries over the last couple of years, had a memorable day, getting the better of China’s Zhao Junpeng (21-15 21-18) in the morning session before returning to quell Sakai’s ambitions for a place in the main draw, 21-5 21-16. “I had the hardest draw in qualifying, but I got two good wins,” said Parupalli. “I didn’t play almost for a year. The shoulder injury happened during the PBL (Premier Badminton League) final in January. It took three months for it to heal. “It’s going to take time. The breaks have been long. I feel I’ve lost my base fitness. I had knee surgery earlier, now it’s the shoulder. To recover fitness you need for work for a long period.”

The Australian Open will signal the completion of the first half of the World Superseries circuit. With the next big stop being the all-important TOTAL BWF World Championships, the event boasts of strong draws in all five categories.

Defending champion Hans-Kristian Solberg Vittinghus (Denmark) will look to redeem his Superseries season as he takes on India’s Siril Verma in the opening round.

“It’s a different feeling coming in as defending champion,” said Vittinghus. “It hasn’t happened before at this level. It’s nice to come here and see that I’m on the posters and getting invited for the press conference and everything… I’m not really used to that. So it’s a different experience and I’m enjoying it.

“I haven’t been playing great this year. I did alright at the European Championships and felt I got back on track. Indonesia was a bit of a setback. The last few Superseries have been a  bit bad for me. I’m not happy with my performances this year. I hope this week can change my fortunes a bit. It’s a mixture of many things, like injuries, and also, shortly after this event last year, my dad died, and that affected me for some time.”

The most anticipated first round clash in Women’s Singles will be between Spain’s Carolina Marin and Japan’s Nozomi Okuhara. Defending champion Saina Nehwal (India) also has a formidable first round adversary in Korea’s Sung Ji Hyun, while her compatriot Pusarla V Sindhu runs into the player who achieved her career’s finest moment on Sunday – Sayaka Sato, winner in Indonesia.

Men’s Doubles second seeds Li Junhui/Liu Yuchen, winners in Indonesia, are expected to do well this week too; the Chinese would be relatively happy with the draw, which could see them facing last year’s runners-up Angga Pratama/Ricky Karanda Suwardi (Indonesia) in the quarter-finals. In Mixed Doubles, Indonesia Open finalists Zheng Siwei/Chen Qingchen (China) and Tontowi Ahmad/Liliyana Natsir (Indonesia) are slated to meet in the quarter-finals. The Indonesians have a stiff test in the first round, in the form of Malaysia’s Tan Kian Meng/Lai Pei Jing.

Denmark’s Joachim Fischer Nielsen/Christinna Pedersen; England’s Chris Adcock/Gabrielle Adcock and Thailand’s Dechapol Puavaranukroh/Sapsiree Taerattanachai are the other big names in the draw, while there will be plenty of interest on how the new combination Satwiksairaj Rankireddy/Ashwini Ponnappa (India) fare, given their sparkling performance at the TOTAL BWF Sudirman Cup recently.

Hosts Australia have strong competitors in the doubles, led by the likes of Matthew Chau, Sawan Serasinghe, Gronya Somerville and Setyana Mapasa.

“It’s nice to have the best players come to Australia. It’s amazing for me as well, I hope to do well,” said Somerville. “I’ve played at the Australian Open since 2013 – the stadium’s great, it’s all set up well. This is a good tune-up in our preparation for the World Championships.”