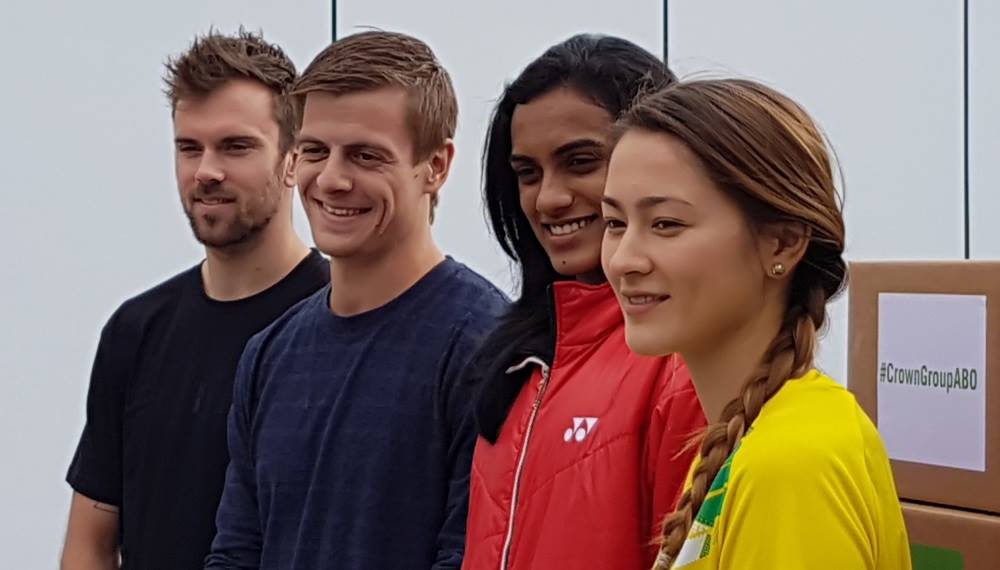 Top contenders of the CROWN GROUP Australian Open attended the launch event at The Star hotel in Sydney today.

With the scenic Darling Harbour in the background, the players appeared relaxed and ready to compete in the sixth World Superseries event of the year. Among the dignitaries who attended the event hosted by entertainment sponsor The Star were Roy Marcellus, Sales and Marketing Director of Crown Group; Saro Mugnaini, GM of VIP Marketing International for The Star; and Russell Walsh, Senior Manager, Marketing and Brand, MetLife Australia.

“It’s a different feeling coming in as defending champion,” said Vittinghus. “It hasn’t happened before at this level. It’s nice to come here and see that I’m on the posters and getting invited for the press conference and everything… I’m not really used to that. So it’s a different experience and I’m enjoying it.

“I haven’t been playing great this year. I did alright at the European Championships and felt I got back on track. Indonesia was a bit of a setback. The last few Superseries have been a bit bad for me. I’m not happy with my performances this year. I hope this week can change my fortunes a bit. It’s a mixture of many things, like injuries, and also, shortly after this event last year, my dad died, and that affected me for some time.”

Australian doubles player Gronya Somerville was excited on the eve of her home Superseries.

“It’s nice to have the best players come to Australia. It’s amazing for me as well, I hope to do well,” said Somerville. “I’ve played at the Australian Open since 2013 – the stadium’s great, it’s all set up well. This is a good tune-up in our preparation for the World Championships.” Insurance major MetLife, global sponsor of the BWF World Superseries, hosted a Health Day with students from Presbyterian Ladies’ College in Sydney. Fifty students attended the ‘MetLife Health Day 2017’ and participated in various sessions on health and lifestyle values, as well as teamwork and teambuilding skills. The participants received badminton lessons from professional coaches and players, and took away a Yonex badminton racket as an event memento. “I’m very passionate about badminton and I’m happy that I’m able to give back to the sport. The benefits of playing badminton go far beyond just physical health. It also teaches us life values like confidence, integrity, succeeding together as a team and health and fitness awareness,” said Somerville.

MetLife Australia CEO Deanne Stewart reiterated the strength of MetLife’s partnership with BWF: “We are proud of our global partnership with the BWF. This partnership is a great opportunity for MetLife and BWF to leverage our shared vision on promoting health and wellness with sports being a key catalyst. We are excited to capture badminton’s spirit of well-being, achievement and dedication to success and share it with our customers, employees, agents, partners and the communities in which we operate.”