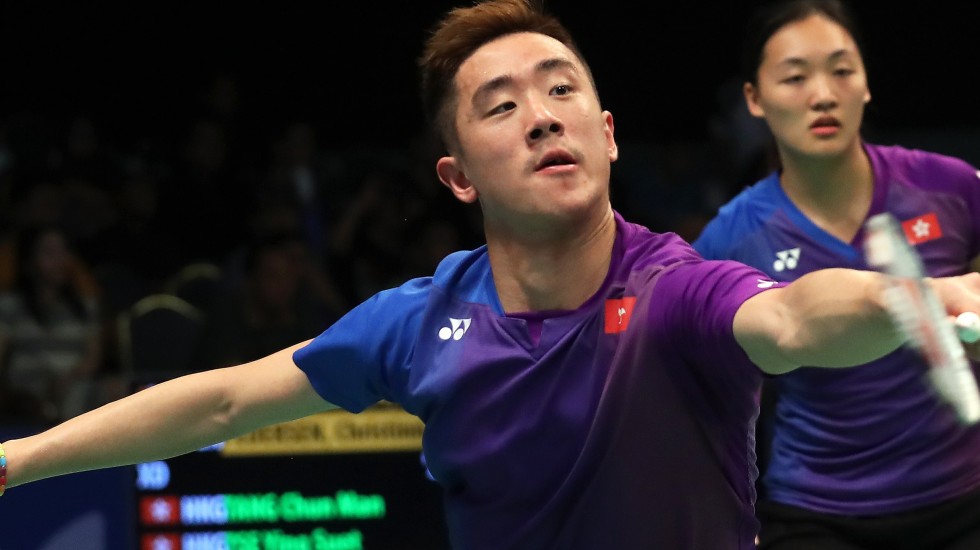 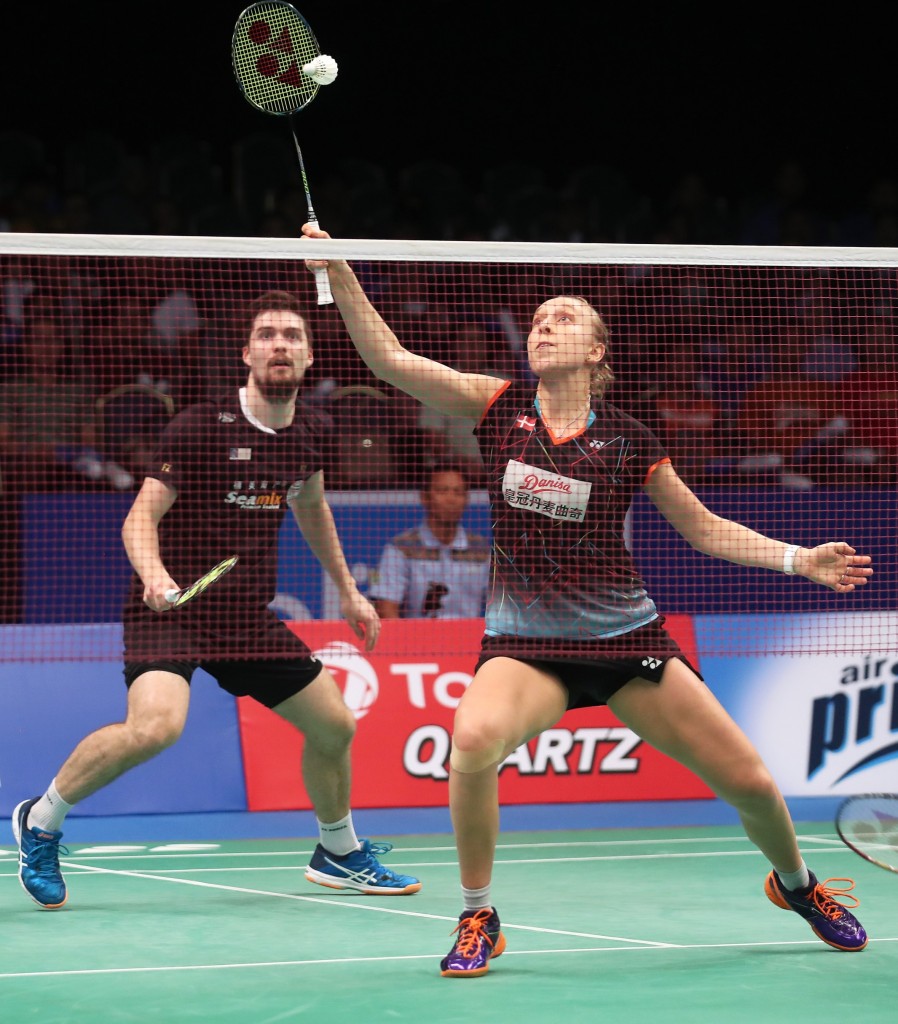 Fans were still settling into their seats before noon at Jakarta Convention Center when hometown favourites and No.7 seeds, Praveen Jordan and Debby Susanto, were booted from the tournament in the first round by Denmark’s Mathias Christiansen and Sara Thygesen, 15-21 21-19 21-11, in 59 minutes.

The shockwaves increased in the early afternoon but this time it was the Danish contingent which was reeling rather than rejoicing as their standard-bearers, Joachim Fischer Nielsen and Christinna Pedersen, failed to rise to the challenge posed by Tang Chun Man and Tse Ying Suet (featured image). Despite fighting back to force a decider, the veteran Danes found themselves lagging in the score as their rivals came through calmly, 21-16 15-21 21-15 versus the No.4 seeds.

It was a fitting celebration for the Hong Kong pair, marking their one-year partnership which began at last year’s Indonesia Open.

In accordance with the well-known adage, misery showed its love for company, also ensnaring blossoming pair, Dechapol Puavaranukroh and Sapsiree Taerattanachai. For the second event in succession the Thai tandem were dismantled in three games by Goh Soon Huat and Shevon Jemie Lai. The Malaysians, who have been partners for about eight months, prevailed 21-16 15-21 21-13 to cast aside the No.8 seeds just as they did in the semi-finals of the SCG Thailand Open 2017 two weekends ago.

“It’s great to beat them again. We are a left-handed-right-handed combination and that makes them uncomfortable. Right now, Mixed Doubles is very challenging but we are motivated to try and improve and move up the rankings,” said a buoyant Lai. 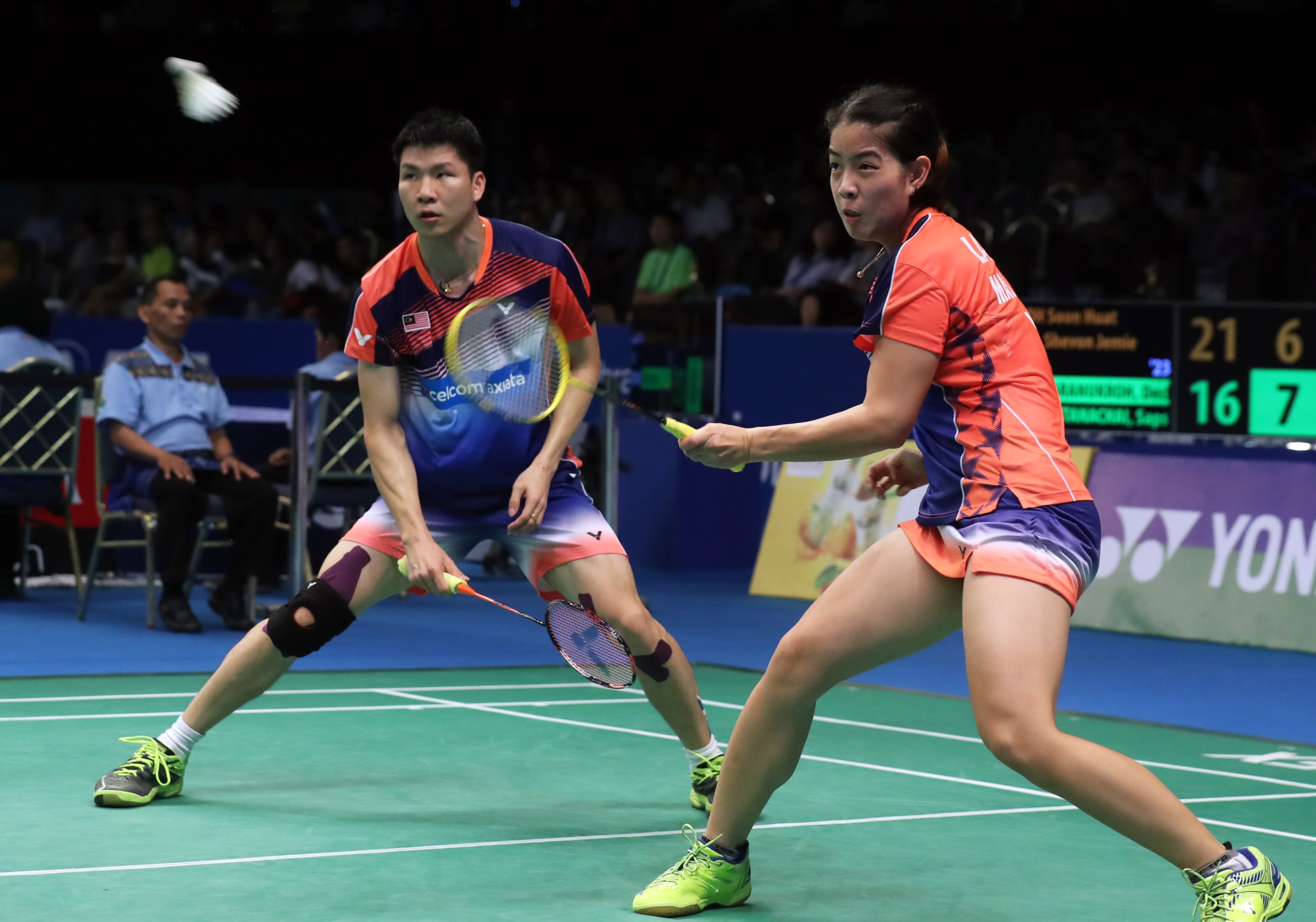 Revelling in their success, Denmark’s Christiansen and Thygesen expressed surprise at ousting Jordan and Susanto on their home turf, though noting “we were more energetic and controlled the match in the third game”.

“Of course they were under pressure. They’re one of the top pairs in this tournament and we are the underdogs. We’ve been playing well lately so we thought we had a good chance but we are a bit surprised at beating them,” said Christiansen; his partner adding that they analysed their opponents’ style of play thoroughly.

A disappointed Susanto noted the Danes were able to wrestle the ascendancy away from her and Jordan in the second again.

“We lacked anticipation and they gained a lot confidence and we panicked. In the third game, the key was the serve. They were very good and it was 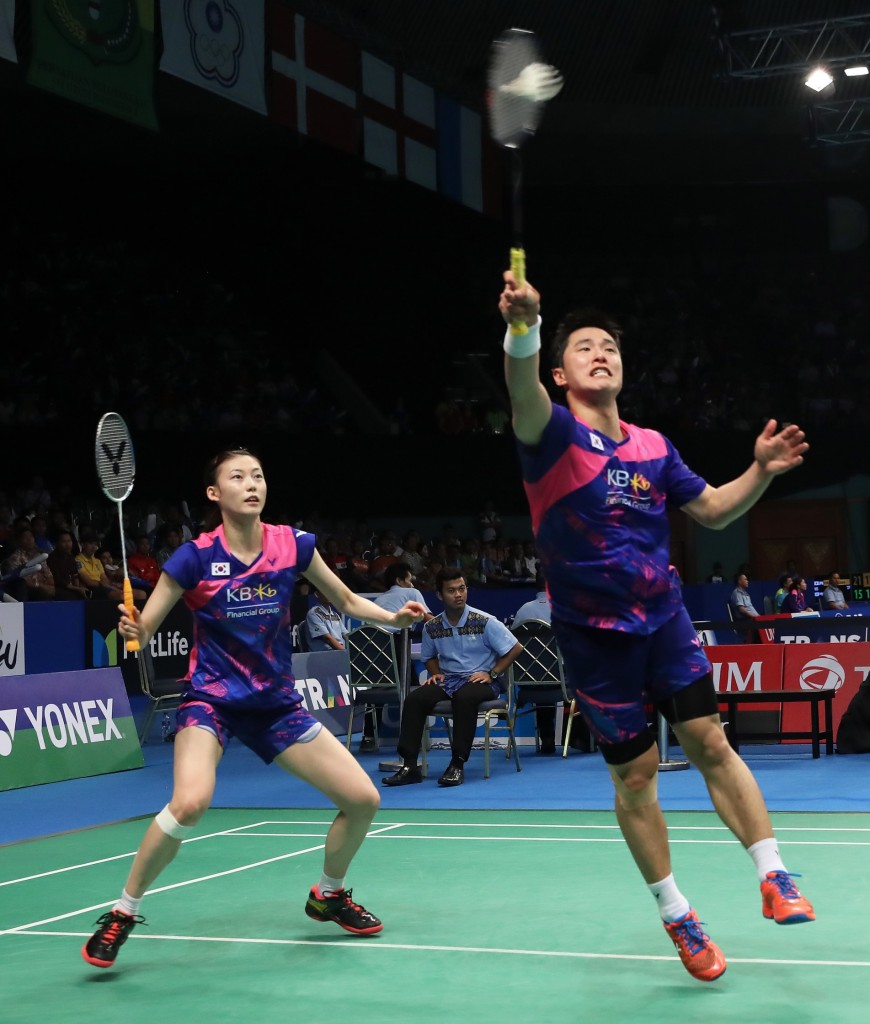 difficult for us if we didn’t return serve well,” she said.

Ironically, Denmark’s seasoned duo, Fischer Nielsen/Pedersen, could not capitalise on the Jordan-Susanto defeat following the Indonesian pair, to whom they have often lost, out the door.

“There’s no excuses. We came here as well prepared as we could be. We fought back in the second game but we got a bad start in the third and we just couldn’t catch up,” said Fischer Nielsen straightforwardly.

Their conquerors, Tang and Tse, were composed throughout, the latter stating she had been sick last week and they entered the match “not expecting to beat the Danes”.

Amid all the drama, Rio 2016 gold medallists, Tontowi Ahmad and Liliyana Natsir, managed to avoid the calamity – but only just in a 72-minute thriller against Korea’s Kim Dukyoung and Kim Ha Na.

Having lost a close first game, the stellar pair were in danger of being bounced from their home Superseries in straight games but squeezed through to a third game as Korea sprayed the shuttle wide on a few crucial points. The Indonesians were again in trouble in the decider, at times looking tentative while the Kims powered to a 15-10 lead. However, with boisterous and anxious spectators urging them on, Ahmad and Natsir clawed level at 16-16 and then grabbed two priceless match points as Kim Ha Na, in a rush to smash a winner, struck the shuttle into the net. 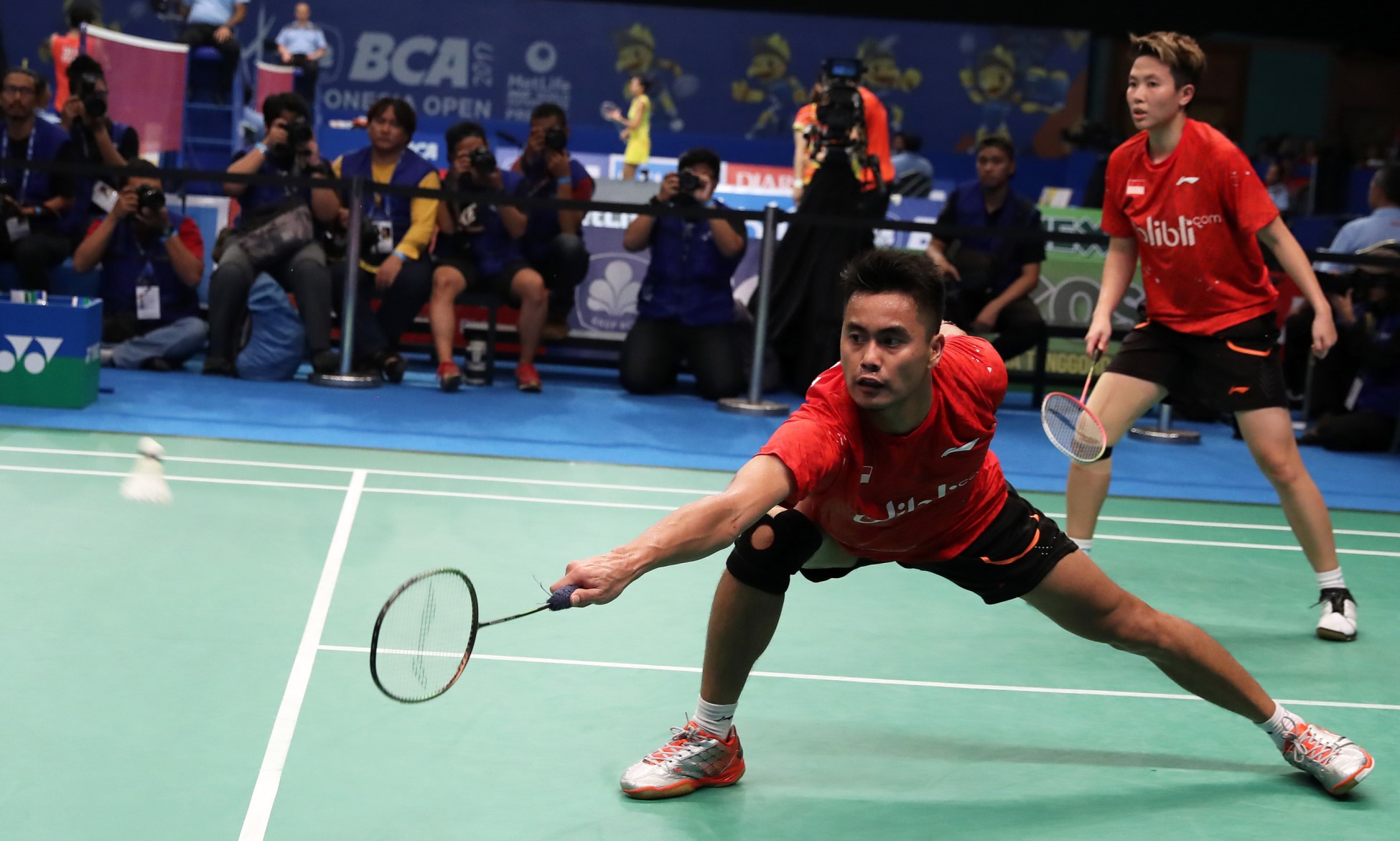 Determined not to be denied, Natsir firmly dispatched the shuttle to the back court for the winning point as fans broke out in loud cheers at the 19-21 21-19 21-18 outcome. The No.6 seeds had survived to fight another day.

“We were lucky when Kim (Ha Na) missed that smash. She is the senior player and she was guiding her partner. Hopefully we can learn from this and improve in the tournament,” said Natsir, shrugging off questions about her ongoing knee problems.

Elsewhere, China’s Lu Kai and Huang Yaqiong also required a comeback to reach the second round. On track for a fourth Superseries this season, the No.2 seeds rebounded to triumph 15-21 21-16 21-17 over Thailand’s Bodin Isara and Savitree Amitrapai.

Mixed Doubles also lost No.3 seeds, Zhang Nan and Li Yinhui of China, due to Li suffering a back injury. Their first-round opponents, Fachryza Abimanyu and Bunga Fitriani Romadhini of Indonesia, advanced to the second round by walkover.