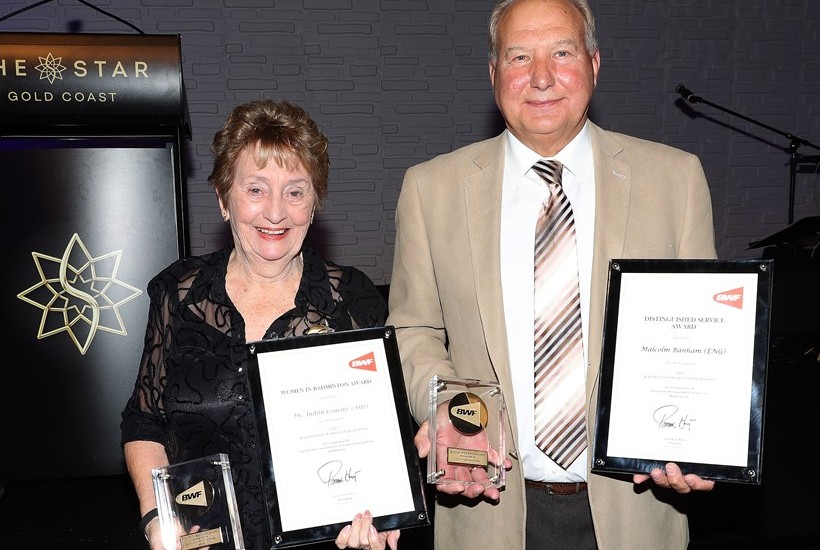 A trio of badminton stalwarts have been honoured by the world-governing body in recognition of their service to the sport.

Veteran Indonesian administrator, Dr. Justian Suhandinata, has been made an Honorary Life Vice-President of the Badminton World Federation while Dr. Judith Cousins and Malcolm Banham (featured image) have received two of the organisation’s highest administrative awards.

These accolades were announced recently in Gold Coast as the BWF family gathered for its Annual General Meeting, Member’s Forum and Gala Dinner ahead of the TOTAL BWF Sudirman Cup 2017.

Dr. Suhandinata received a standing ovation from delegates at the Annual General Meeting as he was saluted for more than 40 years of commitment to the development of badminton at national, continental and world level. Apart from serving on the world-governing body for 14 years, he also provided the impetus for the launch the BWF World Junior Championships by hosting the Jakarta Open Junior Championships in the mid-1980s and inviting all the best juniors worldwide. This was the forerunner to the World Junior Championships. Dr. Suhandinata was also a driving force in the Indonesian Badminton Association (PBSI) for many decades and his club – Tangkas Badminton Club – has trained and developed more than 2000 players from over 70 countries in the past 25 years. His club has also produced some of Indonesia’s top national players over the last 30 years. 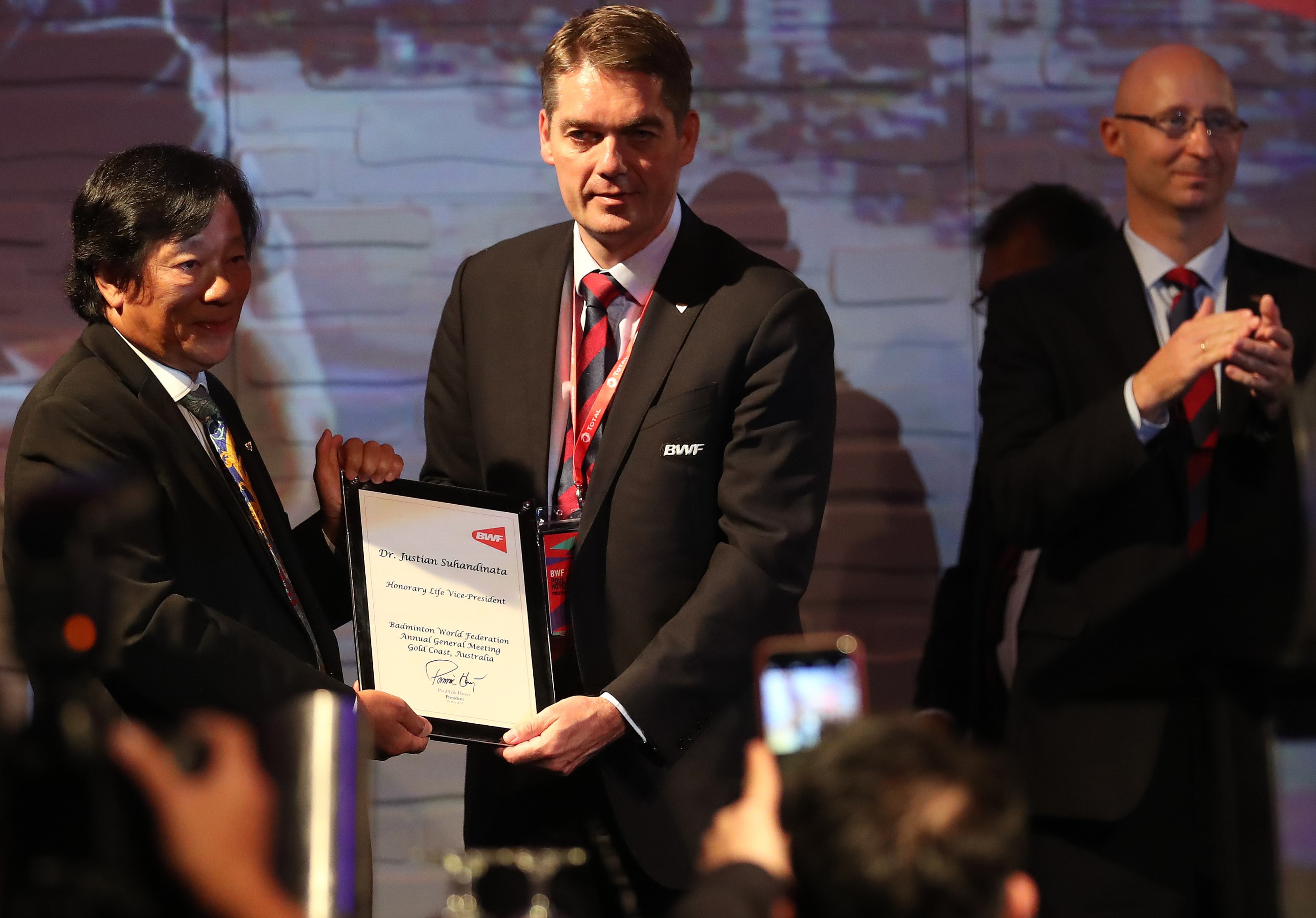 In accepting a plaque from BWF President Poul-Erik Høyer to mark his elevation to the position of BWF Honorary Life Vice-President, Dr. Suhandinata thanked the international federation for unanimously recognising him in such a manner.

“It is the highest honour and I greatly appreciate it,” he said to loud applause from delegates.

Meanwhile, Chair of the BWF Umpire Assessment Panel, Malcolm Banham, was presented with the BWF Distinguished Service Award for his exemplary track record as an umpire and referee at the highest level. Accredited in 1997 and certificated in 2001, the Englishman served as a BWF Umpire until his retirement in December 2014. In reading a citation for his colleague, BWF stalwart Torsten Berg noted Banham was “regularly chosen for the most difficult matches as well as (tournament) finals”.

“Malcolm’s natural authority in the chair and thorough understanding of the game on the highest level enabled him to appear relaxed and smiling through the most difficult of matches, easily gaining the respect of the best players in the world,” Berg told guests at the Gala Dinner. 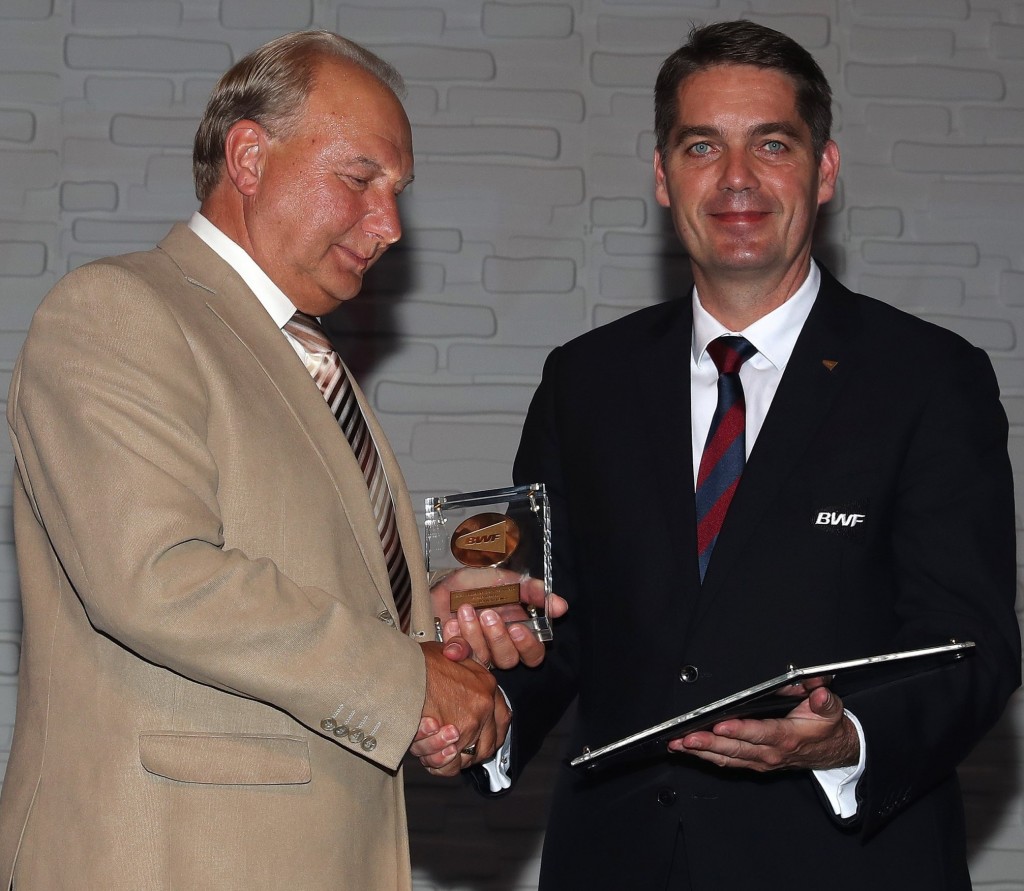 “His charisma, his sense of human relations, his commitment to transmitting his expertise and knowledge makes him a true role model for his peers. Since 2010, he has contributed to the sport as a BWF Umpire Assessor and continues to use his vast experience to the benefit of badminton and BWF.”

Banham, whose daughter Claire was present to witness her father’s moment in the spotlight, thanked his family, especially his wife – whom he referred to as his “coach and manager” – and colleagues globally for their support.

Dr. Judith Cousins was equally generous in acknowledging the contribution of family, friends and persons with whom she has worked. The Women in Badminton Award 2017 winner was congratulated by Badminton Australia President and BWF Council Member, Geraldine Brown, for more than 41 years of voluntary involvement in badminton, including being a player, team manager, state selector, examiner and board member of Badminton Australia and the Australian Commonwealth Games Association. A native of Western Australia, Dr. Cousins has also held various positions within her state’s badminton organisation.

“She has always advocated for sport for women and girls and we are lucky that Judith chose our sport – badminton – to channel her energy, drive and passion,” said Brown.