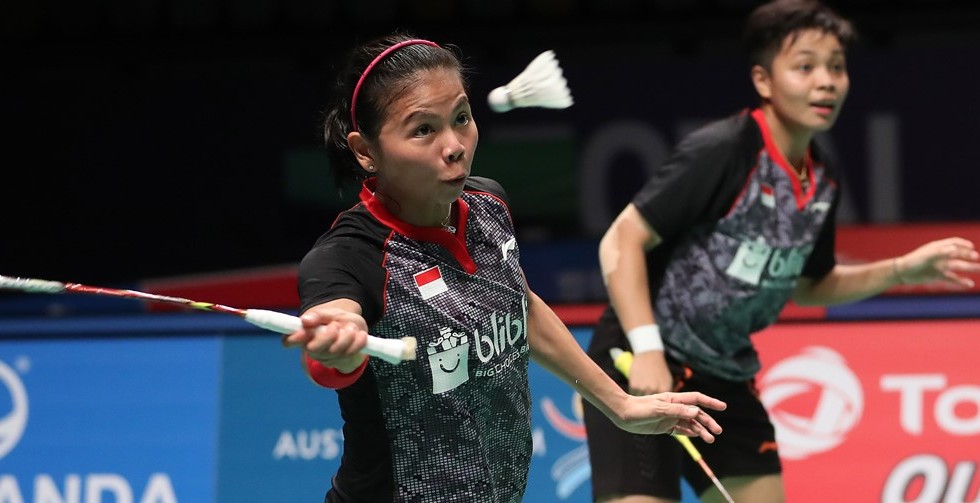 Greysia Polii and Apriyani Rahayu (featured image) gave themselves a good shot of confidence ahead of next week’s BCA Indonesia Open 2017, lifting the Women’s Doubles crown at Nimibutr Stadium. The Indonesian No.5 seeds easily brushed aside Thailand rivals, Chayanit Chaladchalam and Phataimas Muenwong, 21-12 21-12 in 45 minutes. Polii and Rahayu had endured a tougher test in

The No.5 seeding also proved lucky for Indonesia in Men’s Doubles as Berry Angriawan and Hardianto Hardianto overcame Germany’s Raphael Beck and Peter Kaesbauer, 21-16 21-16. Yet again, the champions had come through a harder semi-final with a 22-20 18-21 21-9 victory over Olympic bronze medallists, Chris Langridge and Marcus Ellis on Saturday in 69 minutes. Meanwhile, Beck and Kaesbauer had seen off Mark Lamsfuss and Marvin Emil Seidel, 21-18 14-21 21-19, in an all-German semi-final. 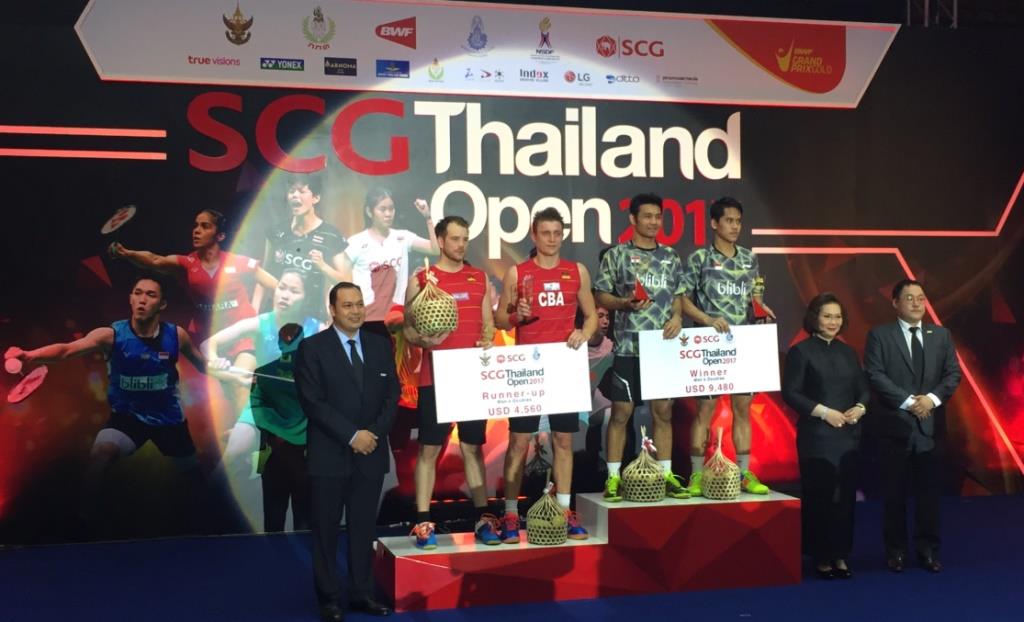 Mixed Doubles was rocked by the demise of top seeds and red-hot favourites, Dechapol Puavaranukroh and Sapsiree Taerattanachai who fell 21-19 19-21 21-17 in the semi-finals. The Thai pair who have enjoyed a run of good form disappointed home fans as they were ousted by Malaysian duo, Goh Soon Huat and Shevon Jemie Lai. Reigning World Junior champions, He Jiting/Du Yue, of China outlasted blossoming Singapore pair and No.2 seeds, Terry Hee and Tan Wei Han, 23-21 21-19, to reach the final. The young Chinese then had enough left in their tank to conquer Goh and Lai, 21-13 16-21 21-12, for the title.

Thai spectators had their chance to celebrate in Women’s Singles as Ratchanok Intanon took top honours over her team-mate, Busanan Ongbamrungphan. In a repeat of the 2013 final, the 22- 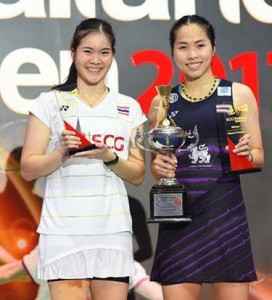 year-old prevailed 21-18 12-21 21-16 to lift her home championship for the second time while Ongbamrungphan was frustratingly condemned to the runner-up place for the third time, having also lost to Japan’s Aya Ohori in last year’s final. Nonetheless, Ongbamrungphan would have been heartened by her semi-final defeat of No.2 seed Saina Nehwal of India for the first time. The Thai shuttler won 21-19 21-18 while top-seeded Intanon beat Beiwen Zhang of the USA, 21-18 21-15, on Saturday.

Meanwhile, B. Sai Praneeth continued his good showing for the year, taking the Men’s Singles crown. The OUE Singapore Open champion rebounded from a game down to topple Indonesia’s Jonatan Christie, 17-21 21-18 21-19, in 71 minutes. The Indian player had beaten Thailand’s Pannawit Thongnuam (21-11 21-15) in the semi-final while Christie won versus Malaysia’s Soong Joo Ven (21-9 21-18) to reach the final.

All eyes now turn to the resumption of the MetLife BWF World Superseries tour with the US$1 million BCA Indonesia Open 2017, starting on Monday 12 June at Jakarta Convention Center as the usual location – the Istora Senayan – is under refurbishment. 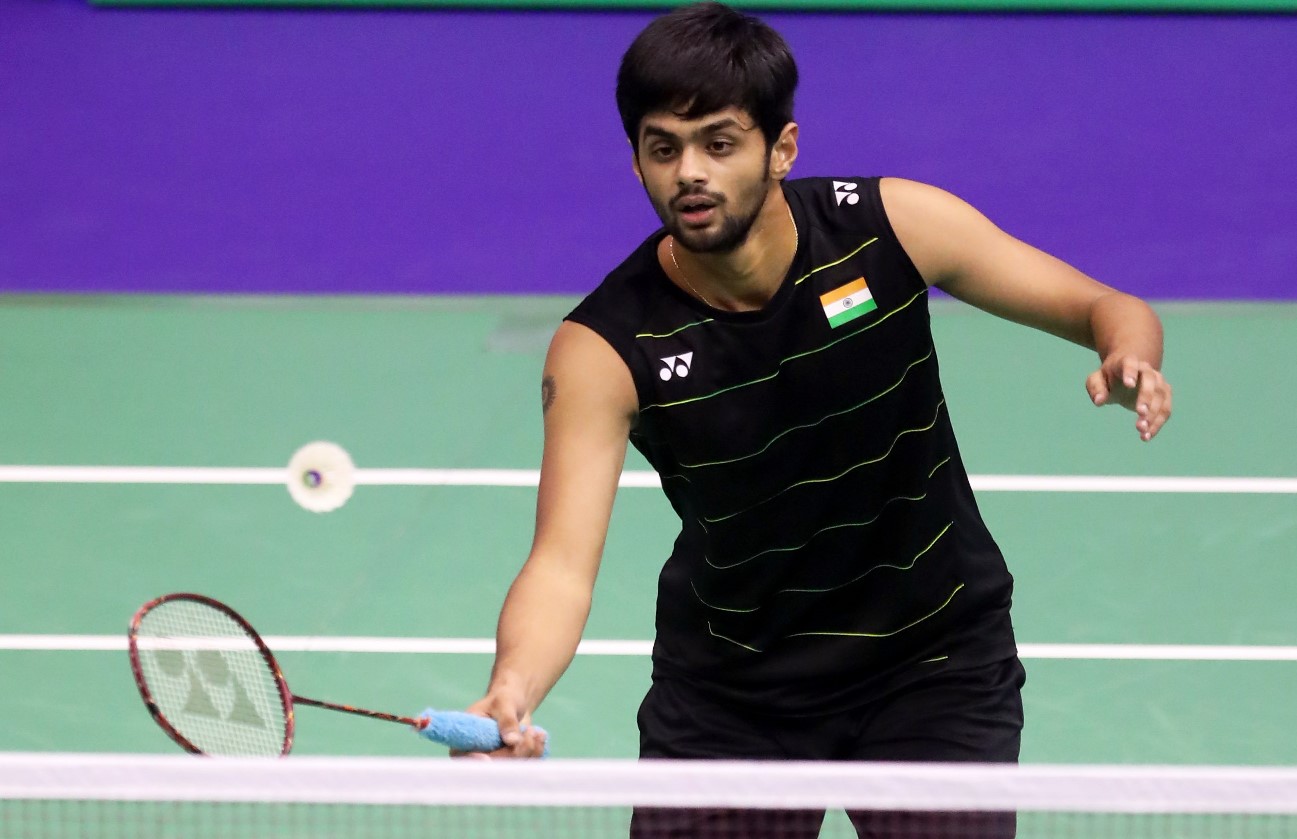