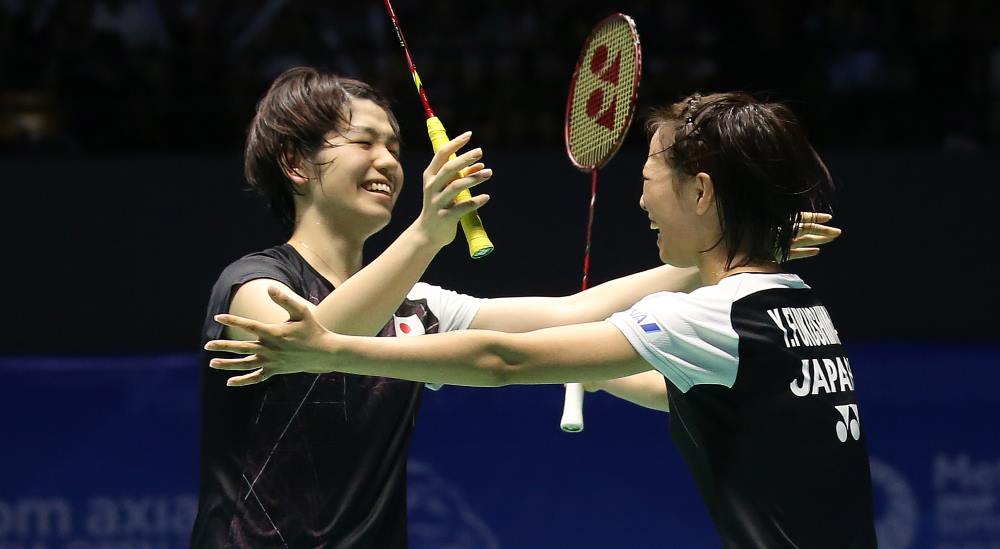 Japan’s phenomenal successes in Women’s Doubles this season are reflected in the Destination Dubai Rankings, with four pairs in the top 7. slightly short of the top-ranked Chang Ye Na/Lee So Hee of Korea.

Fukushima and Hirota (featured image) came of age rapidly this season, starting with a quarter-final at the Yonex All England, followed by a semi-final at the Yonex-Sunrise India Open. Playing their first World Superseries final the next week in Kuching, the young Japanese showed no nerves against experienced Chinese Tang Jinhua/Huang Yaqiong and eased through comfortably to the title in the end.

In fifth spot are Naoko Fukuman/Kurumi Yonao, who earned their shot at a first Superseries title by making the final in India. But Fukuman/Yonao’s wait continued, as they were outplayed by compatriots Shiho Tanaka/Koharu Yonemoto who were in their first Superseries final.

Nevertheless, Fukuman and Yonao can take pride in their season thus far, which included two quarter-finals (All England and Singapore) besides the runner-up position in India.

Behind by just 40 points are Shiho Tanaka/Koharu Yonemoto, who, like Fukushima/Hirota, were a revelation. A quarter-final at the All England was followed by a first-ever Superseries final, in India, and they exceeded all expectations by beating seasoned compatriots Fukuman/Yonao for the crown.

At No.7 are Misaki Matsutomo/Ayaka Takahashi, who had such a phenomenal 2016 season. The Olympic champions are unlikely to feel very pleased with their form this year, which included two straight losses to Fukushima/Hirota. They also fell in their only Superseries final, at the Singapore Open, to Denmark’s Christinna Pedersen/Kamilla Rytter Juhl. The Danes (No.4) played in only three Superseries but did exceedingly well. They started with a runner-up finish at the All England (to Korea’s Chang Ye Na/Lee So Hee), made the quarter-finals in Malaysia, and won the title in Singapore.

Chang/Lee had a consistent early season, which is reflected in their No.1 ranking. The Koreans won the All England, and although they fell in the opening round in India, finished semi-finalists in Malaysia and Singapore.

Compatriots Jung Kyung Eun/Shin Seung Chan moved up by two places into third spot, thanks to quarter-final performances in England, India and Singapore. The only Chinese pair in the top 8 are Huang Yaqiong/Tang Jinhua. The duo steadily improved after a second round loss in England; they were quarter-finalists in India and went all the way to the final in Malaysia. Another Chinese pair, Bao Yixin/Yu Xiaohan, follow close behind at No.9. With China banking on new combinations in doubles following the retirement of its established stars last year, it will be interesting to see which pairs take their place as the season progresses.

Also in the top 10 are Thailand’s Puttita Supajirakul/Sapsiree Taerattanachai, quarter-finalists in India and Singapore.