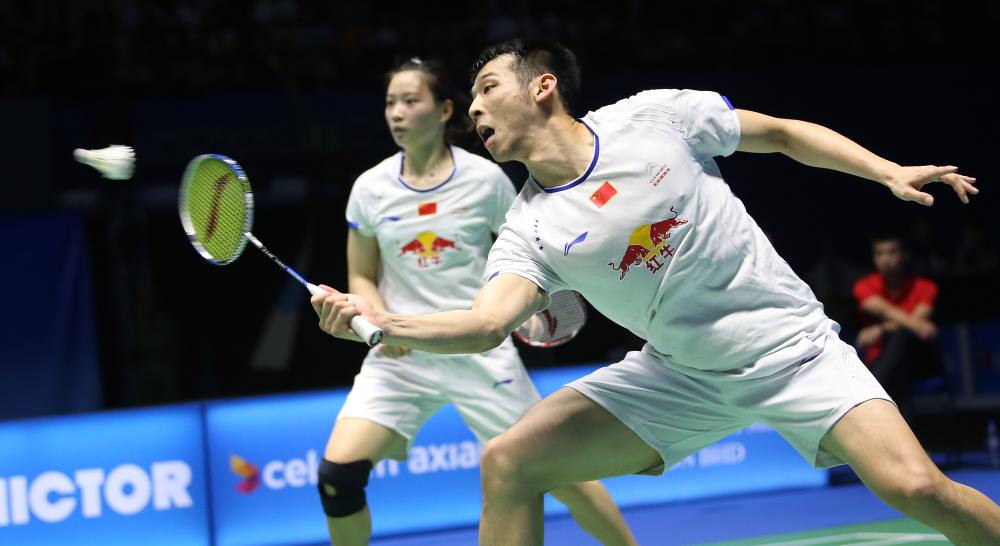 The standout Mixed Doubles pair of this season, Lu Kai and Huang Yaqiong, are sitting pretty atop the Destination Dubai Rankings, leading their nearest rivals by over 15,000 points.

The Chinese duo (featured image) have been on fire in the four World Superseries events completed so far – Yonex All England, Yonex-Sunrise India Open, Celcom Axiata Malaysia Open and OUE Singapore Open, losing just one match – the final of the Malaysia Open. At all other events, they have dominated their opponents, and only rarely have they been taken the distance. In second place are compatriots Zheng Siwei and Chen Qingchen, who faced off with Lu/Huang in two finals. Dubai World Superseries Finals champions Zheng/Chen were outplayed in India but got their revenge in Malaysia.

Dechapol Puavaranukroh and Sapsiree Taerattanachai made a big leap in the latest Destination Dubai Rankings, climbing nine places to No.3. The Thais lost the opening round of the first two Superseries but got their act going and were quarter-finalists in Malaysia and runners-up in Singapore – both times losing to Lu and Huang. Just 290 points behind are Chris Adcock/Gabrielle Adcock. The England couple had a strong start to the season by making the semi-finals of the All England – which they lost in a close finish to Lu/Huang – and the India Open, but in Malaysia they fell in the second round.

In fifth place are Chan Peng Soon and Goh Liu Ying who enjoyed a spell of good form. The Malaysians couldn’t quite follow up on their Rio Olympics silver medal last year and had three consecutive first round Superseries losses at the end of 2016. They came back strongly this year and were within a couple of points of claiming the All England crown over Lu/Huang in the final. A semi-final at the India Open followed, but a right arm injury to Goh scuttled their chances at their home Superseries. Nevertheless, the Malaysians will gain confidence from their performances this year as they look ahead to the Major Events that are coming up.

No.6 pair Joachim Fischer Nielsen and Christinna Pedersen reached the quarter-finals of the three Superseries they played in – the All England, the Malaysia Open and the Singapore Open – and wouldn’t be too pleased with their season so far, which included a surprise loss to new Indian pair Sumeeth Reddy/Ashwini Ponnappa at the Syed Modi International in January.

Indonesia’s Tontowi Ahmad/Liliyana Natsir (No.7) have been uneven in three Superseries this year, the last being an abject first round loss to Thailand’s Dechapol Puavaranukroh/Sapsiree Taerattanachai in Singapore. Their semi-final loss in Malaysia – to Lu/Huang – was a messy affair, and the Indonesians will want to put their sub-par performances behind them as they seek to reclaim their BWF World Championships crown in August.

Choi Solgyu and Chae Yoo Jung are Korea’s highest-ranked pair at No.8. The Koreans made the quarter-finals in Malaysia – a thrilling 82-minute affair which they lost to Ahmad/Natsir; as the combination grows in confidence it could be one of the pairs to watch out for this year. At No.9 and No.10 are two Japanese pairs – Kenta Kazuno/Ayane Kurihara and Yuta Watanabe/Arisa Higashino.

While Kazuno/Kurihara have had a modest season, the pair that has caught the eye is Watanabe/Higashino. Showing skills and temperament that belie their age and experience, the young Japanese made the semi-finals of the All England, a sign perhaps of things to come. The top eight pairs on the Destination Dubai Rankings at the completion of the 12 MetLife BWF World Superseries events will be invited to the year-ending Dubai World Superseries Finals at Hamdan Sports Complex in the desert city.