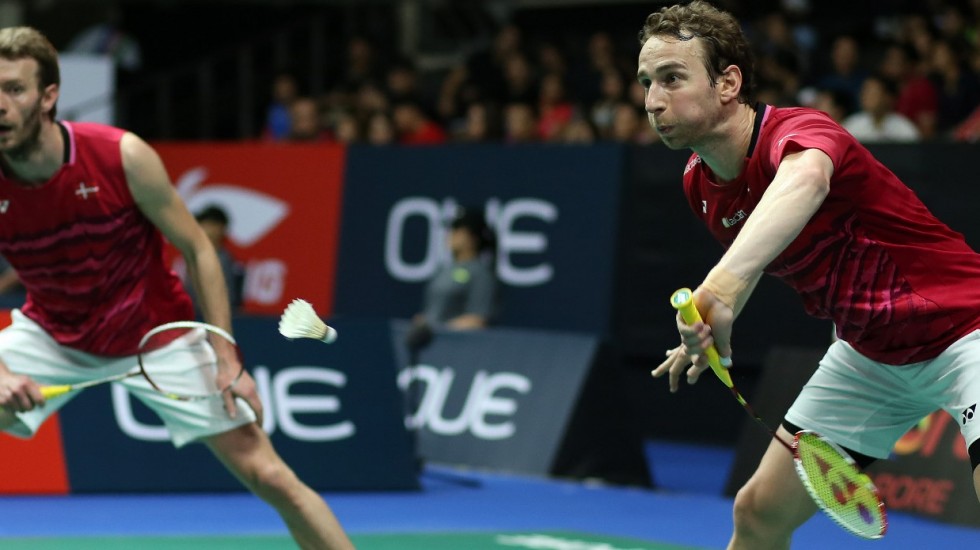 It took the “old men” to bring the hot young boys of Men’s Doubles back down to earth today at the OUE Singapore Open 2017.

Declaring they were motivated for their blockbuster semi-final, Denmark’s veteran duo of Mathias Boe and Carsten Mogensen (featured 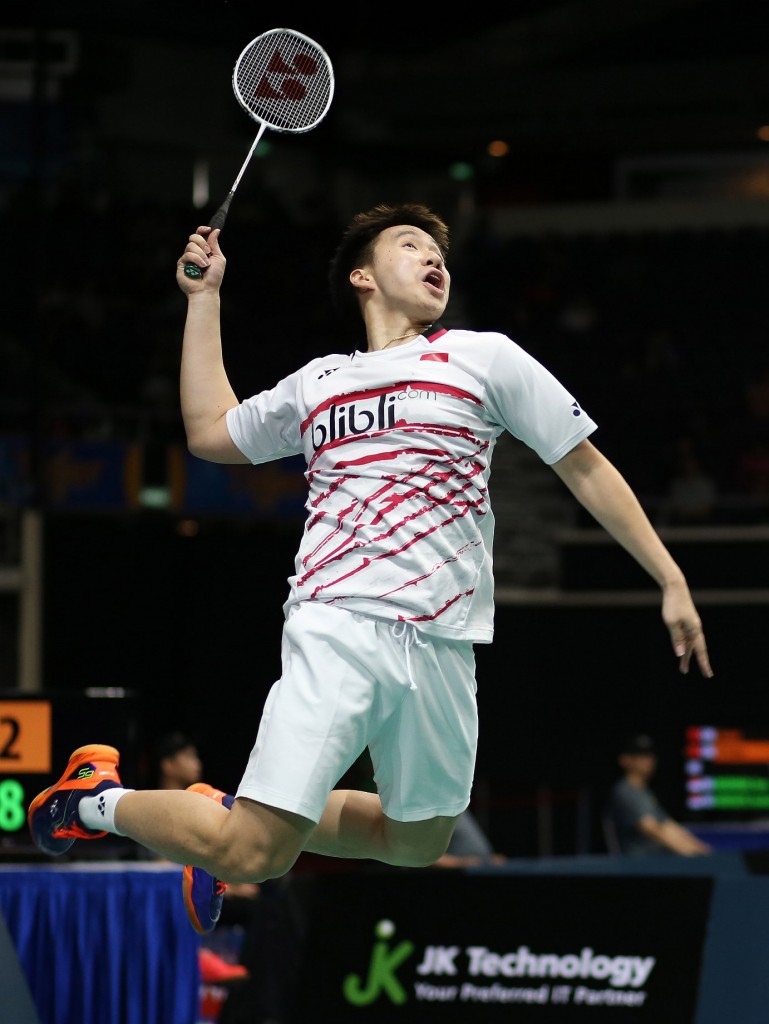 image) ended the remarkable winning run of Marcus Fernaldi Gideon and Kevin Sanjaya Sukamuljo who had claimed all three titles on the MetLife BWF World Superseries tour so far this season, including two in the last fortnight.

Gunning to stretch their reign to four-out-of-four victories, the Indonesian high fliers were halted 11-21 21-11 21-14 by their tactically-astute seniors who forced livewire Sukamuljo to the back of the court while focusing their attack on his partner.

“Keep Kevin at the baseline and put pressure on Marcus. That’s how all nations should play them. That tip is for free. The next one you have to pay for it!” declared 36-year-old Boe in a jubilant mood.

“It’s never easy to beat them. We made it a very physical game and that’s not how they want to play, so kudos to us.”

His 33-year-old partner was equally pleased with the manner in which they rebounded after losing the first game.

“That feels good. We were motivated. We really wanted to beat them. They have been the best

(pair) for the last few tournaments. Though we got a bad start, we kept calm and played a good match,” said Mogensen who, along with Boe, showed some slick all-court skills that were loudly applauded despite the scores of Indonesian spectators.

Gideon and Sukamuljo said the Danes played well and had great defence while their own power was increasingly waning.

“In the beginning, we had short rallies and lobs which were comfortable for us. But when we were given high shuttles, given heavy shuttles, it was difficult as we needed a tremendous amount of power,” explained Gideon. 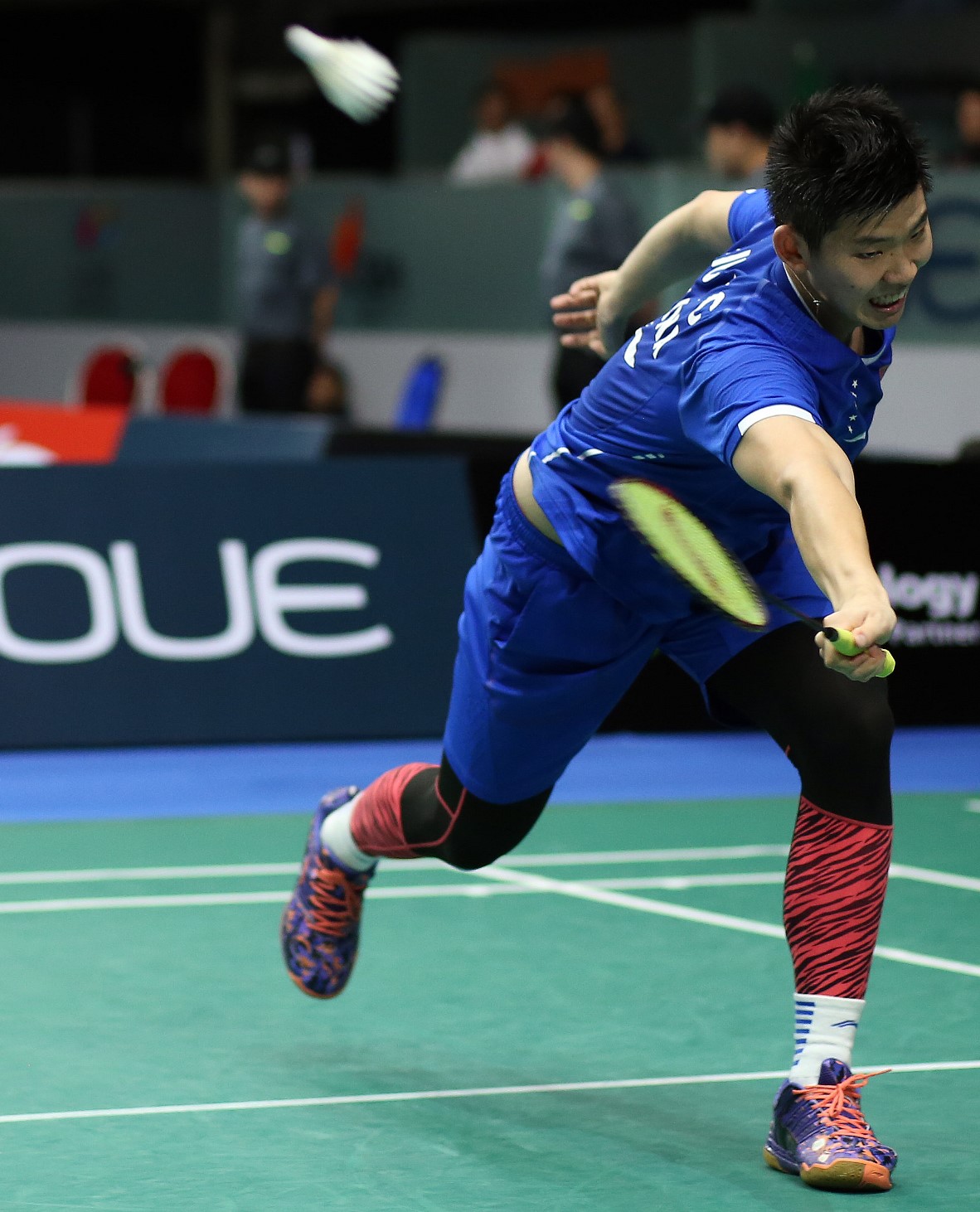 Indonesia suffered a shut-out in the category as Li Junhui and Liu Yuchen came from a game down to defeat Berry Angriawan/Hardianto Hardianto, 15-21 21-10 21-16. The Chinese credited mental strength for their success, adding they are keen to win in Singapore having lost in last year’s semi-finals.

Meanwhile, motivation clearly coursed through the veins of Denmark’s Women’s Doubles duo, Kamilla Rytter Juhl and Christinna Pedersen, too. The No.2 seeds gave a disciplined and resolute performance over Korean rivals who have caused them many headaches recently. Their beaming faces as they exited the court – 28-26 21-11 winners against Chang Ye Na/Lee So Hee – said it all. 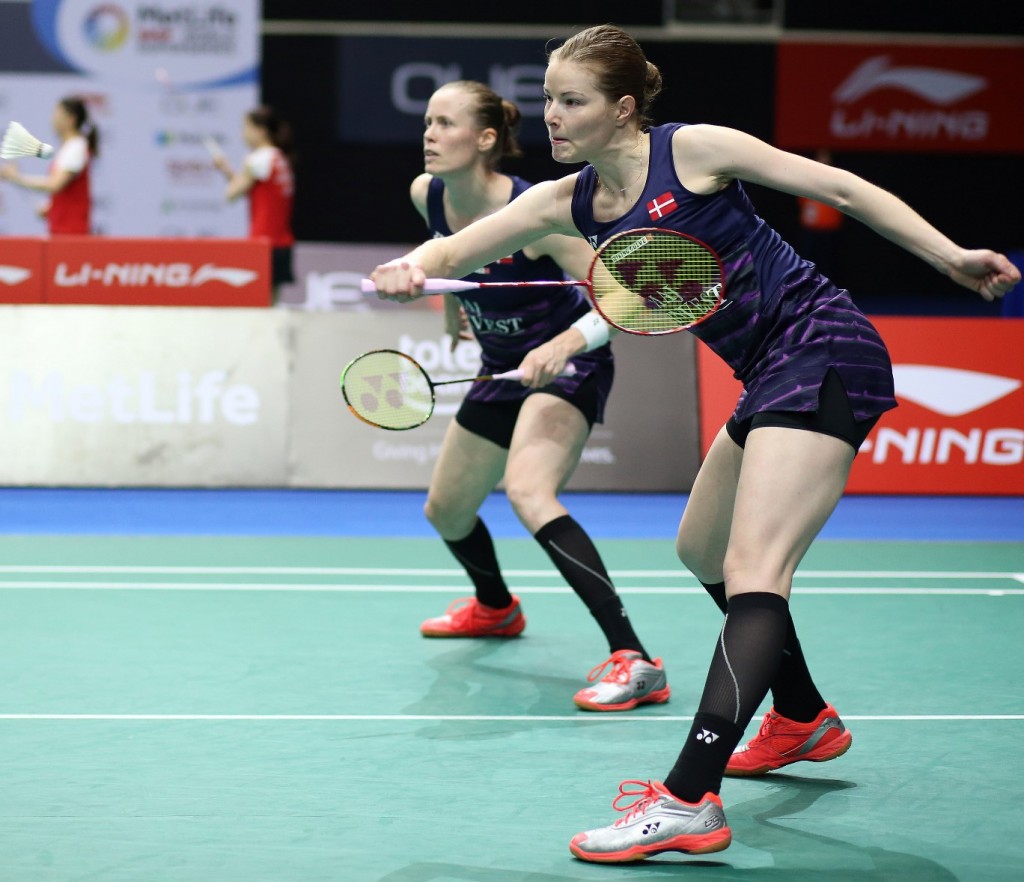 “We have struggled against them for some time so this is a really good win for us today,” said Rytter Juhl.

At 26-26 in the first game, Pedersen reminded her partner of the Rio 2016 Olympic Games where they eked out a vital 28-26 game versus the same opponents. Today, that buffer again provided some breathing room and they flourished from thereon.

“Many times when we play them, it’s about our speed. Our movement has to be really fast. Our awareness has to be so good,” noted Pedersen.

Considering their tough draw, they joked that they came ready to go to the beach if they lost early but, of course, both are looking forward to the final against top seeds, Misaki Matsutomo and Ayaka Takahashi. The Japanese fought off Korea’s other ace pair, Jung Kyung Eun and Shin Seung Chan, 21-17 21-17. 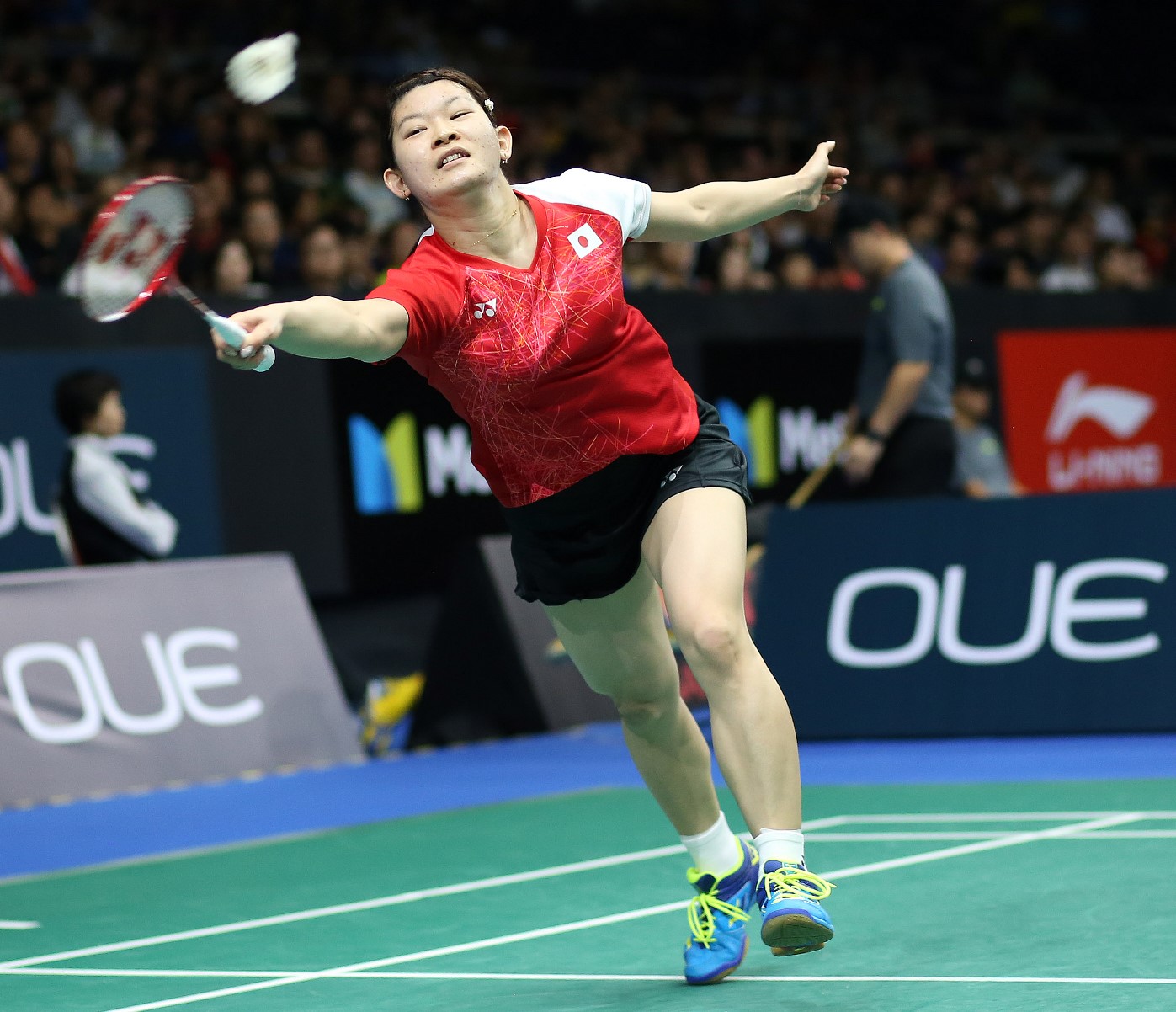 “Last year, we had to withdraw from the final because I was injured. We are happy to come back and try to win this time.”

It was a bad day at the office for Shin who also perished in Mixed Doubles with Kim Gi Jung as Korea lost all five of its semi-finals. They fell to No.2 seeds, Lu Kai/Huang Yaqiong (16-21 21-17 21-12) . The Chinese are hunting a third title this season, having reached all four Superseries finals thus far. 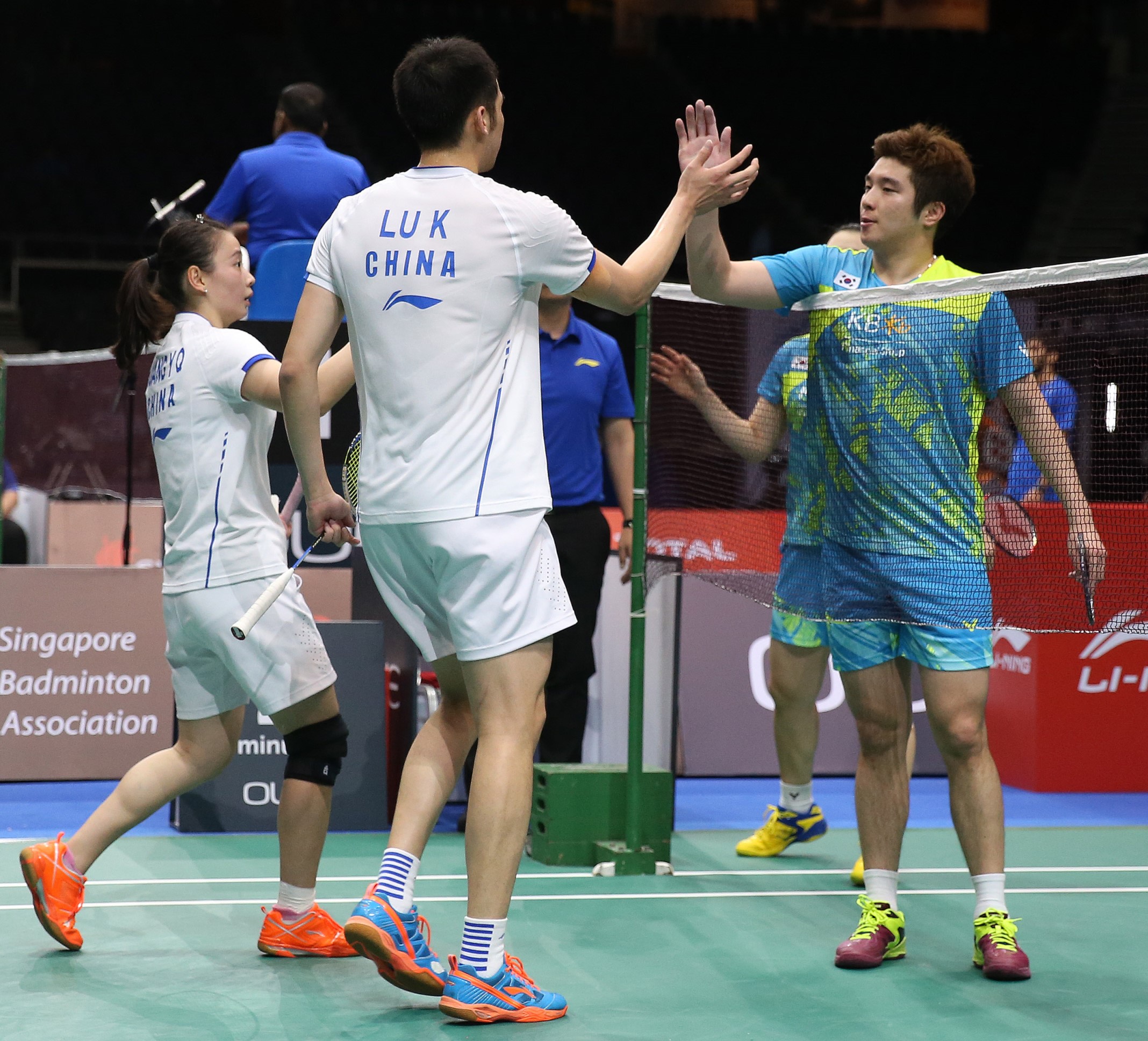 Wearing their “lucky” white uniforms tomorrow, they face Dechapol Puavaranukroh and Sapsiree Taerattanachai who have exceeded their ambition of reaching the quarter-finals. The Thai tandem battled past Malaysia’s Tan Kian Meng/Lai Pei Jing (18-21 21-11 21-14).

“We were not expecting this. They were very good in attack and we tried not to give them chances to attack us,” said Taerattanachai. 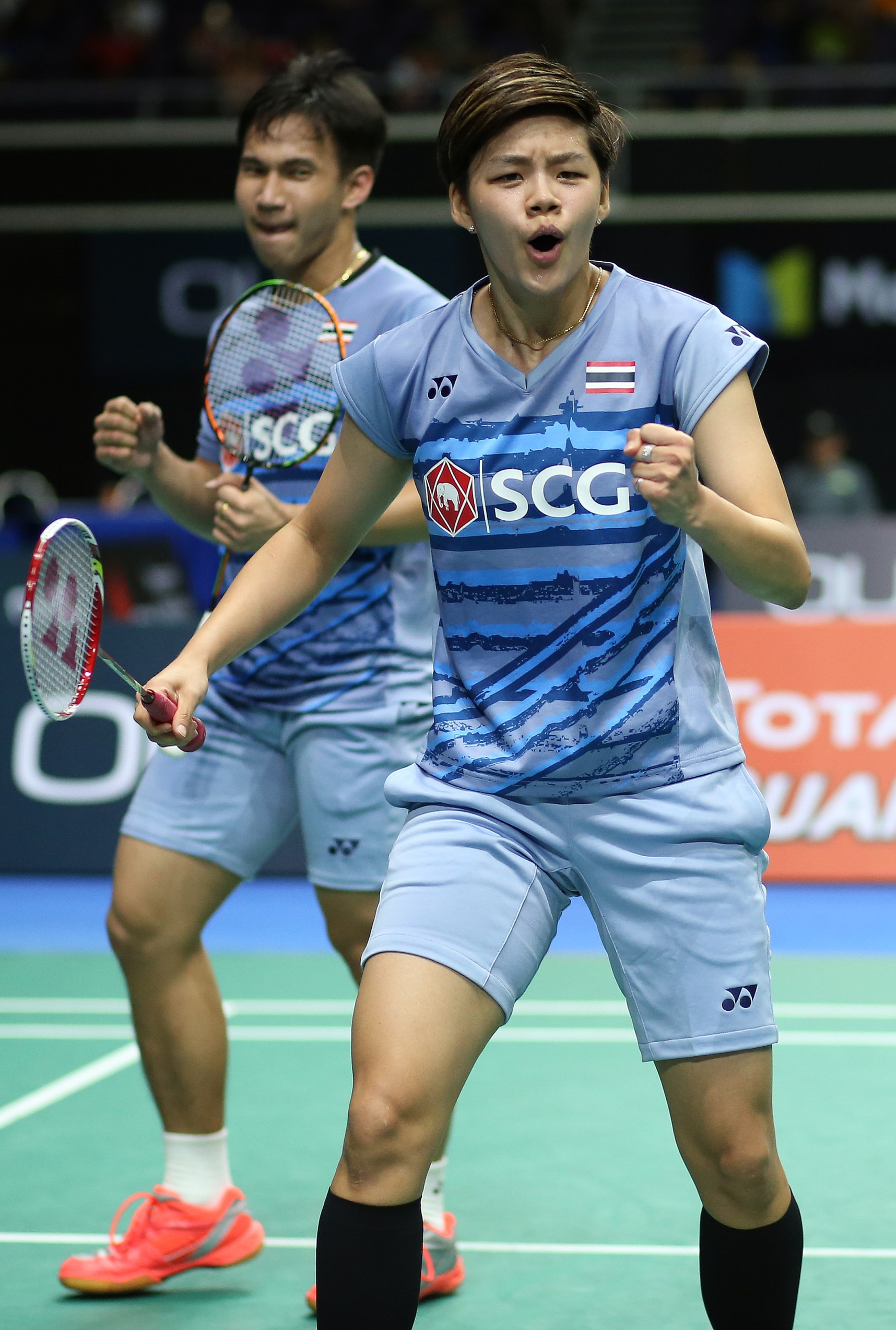