Fans who could not get enough of last Sunday’s fireworks between Tai Tzu Ying and Carolina Marin can tune in again tomorrow!

Arguably the two hottest players on the Women’s Singles circuit now, these star athletes justified their places atop the world rankings by today reaching the final of the OUE Singapore Open 2017. As if already setting their sights on each other, they brushed aside their respective semi-final challengers – Beiwen Zhang and Sung Ji Hyun – to confirm a repeat of their Kuching finale a week ago. 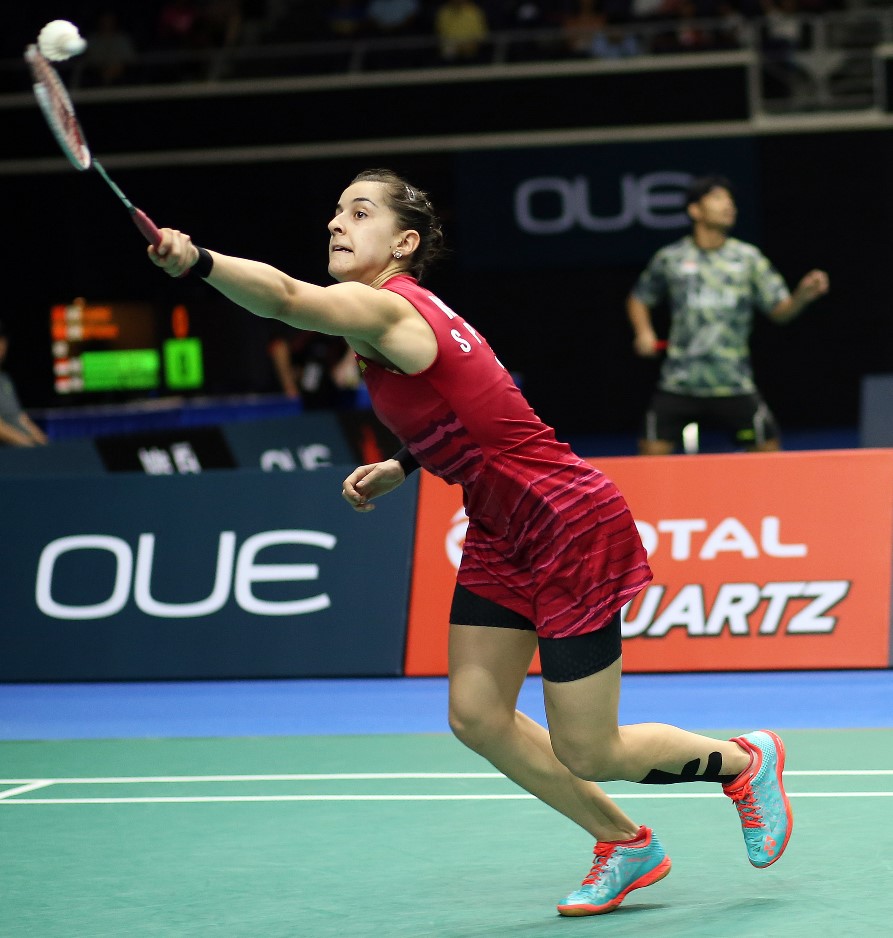 For 23-year-old Marin (featured image; left), it is an impressive three finals in three weeks while Tai (featured image; right) has made it two out of two, having skipped the India leg of the MetLife BWF World Superseries tour two weeks ago. The Chinese Taipei world No.1 will be gunning to extend her Superseries streak, having won her last four tournaments, dating back to November’s YONEX-SUNRISE Hong Kong Open. She has also beaten the Olympic champion in their last three meetings.

Thwarted in the India and Malaysia (Kuching) finals, Marin will look to break the jinx in the Lion City, certainly not wanting to board her flight back to Spain with three runners-up medals to her credit. Today, the loud left-hander brought her imperious best to centre court at Singapore Indoor Stadium and destroyed the capable Sung 21-9 21-12 in 33 minutes. The latter stood no chance against a woman intent on returning to the summit of singles and who covets it openly. Marin’s shots were just too powerful, penetrative and precise for the Korean.

“I feel really good. I am very happy to reach three finals in a row. It’s really difficult but

tomorrow is going to be a different day and I want to win here…I want to be world No.1 again and to get it I have to do my best in every match,” said the world No.2 who looked in even finer form than last week.

Though it took Tai a little while to get into stride versus Zhang, once she found her groove there was no stopping the 22-year-old who wields her racket like a magic wand. Her change of pace and direction proved increasingly troublesome for Zhang who landed in the splits – a feat that would have made a gymnast proud – early in the second game as the American attempted to retrieve another of Tai’s fast-dropping slices.

The 21-19 21-15 score was the result of a decent effort by Zhang plus some careless errors from Tai. However, the outcome was not in doubt. Still, the winner acknowledged she will need to dig deeper versus tougher opposition. 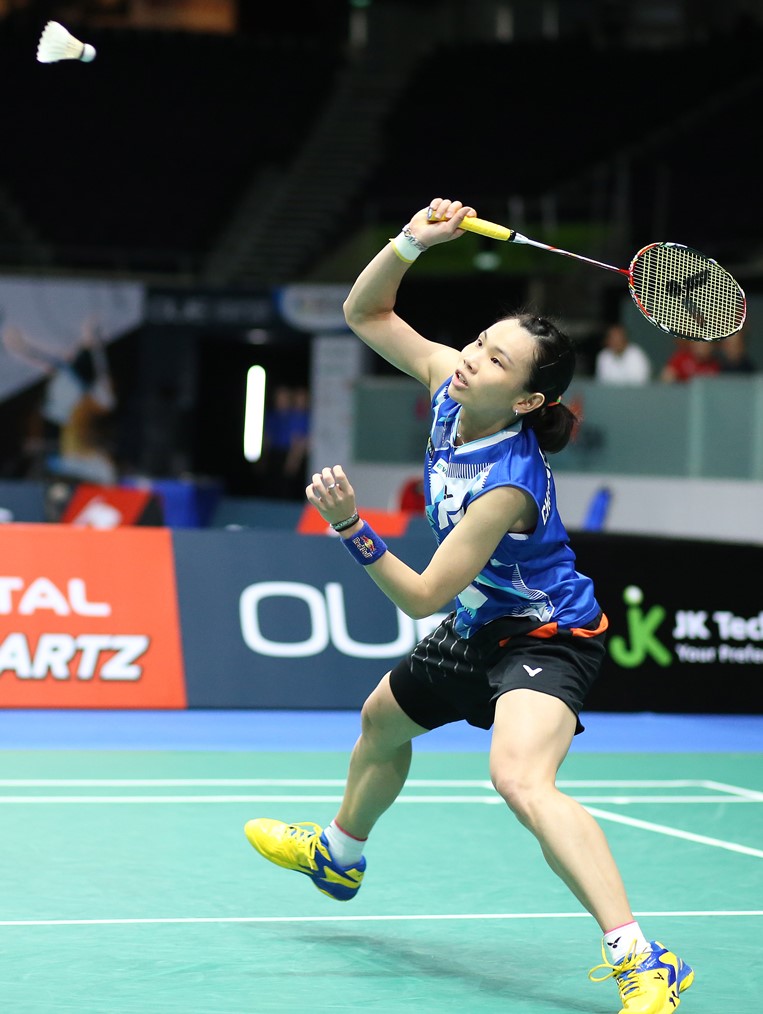 “The biggest challenge is myself. If I don’t make much mistakes I should stand a chance to beat her (Marin). If I perform like I did today, I may lose quickly. Her shots are very powerful and she’s very tall as well. I need to run around the court a lot to fight against her,” assessed Tai.

Satisfied with how she played, nomadic Zhang noted the disparity between her and Tai is the fact that she lacks the full-time coaching and financial support from which most players benefit.

“I don’t get the training for a match like this. I can see the shuttle coming but my body wasn’t fast enough. Sometimes, in long rallies I couldn’t focus. I gave my best and I proved that reaching the French Open final was not lucky. I can play at this level but I need more training,” said the 26-year-old, China-born competitor.

Meanwhile, amid an emotional week for Indian badminton, two of that country’s male shuttlers paid a unique tribute to their fallen leader by advancing to the showpiece Men’s Singles final. One could not help but think that it would have warmed the heart of late President of the Badminton Association of India, Dr. Akhilesh Das Gupta, to see B. Sai Praneeth and later Kidambi Srikanth ensure that, regardless of who wins tomorrow, the honour and glory will be India’s. Dr. Gupta passed away suddenly on Wednesday. 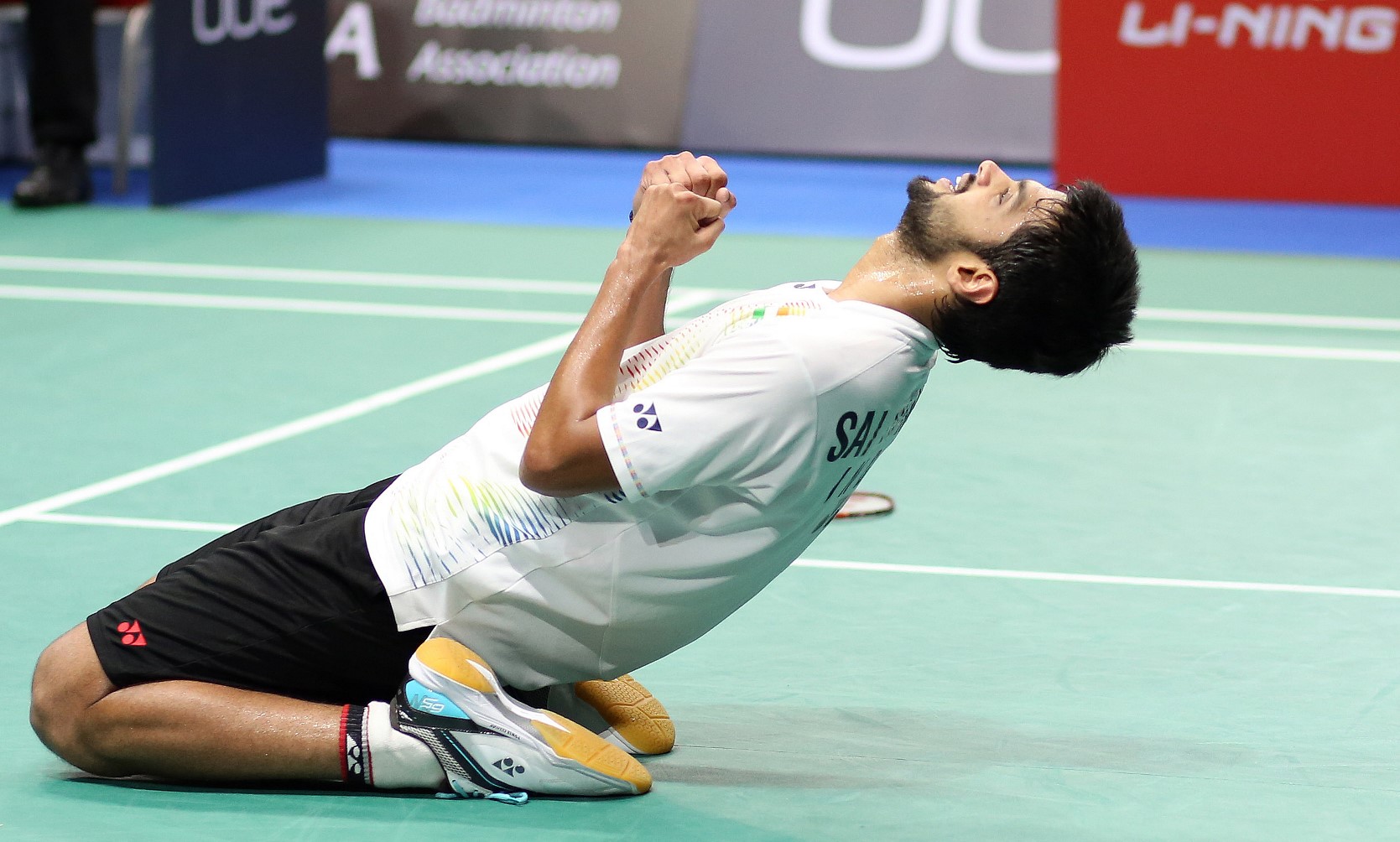 In a battle of first-time semi-finalists, Praneeth blazed to 11-1 lead against Lee Dong Keun of Korea in the first game and never looked back. The 24-year-old cruised home 21-6 21-8 to enter uncharted waters.

His training partner, Srikanth, also put in a polished performance against an equally attacking, if less experienced, Anthony Ginting, calmly wresting control and carving out a 21-13 21-14 triumph against the Indonesian. 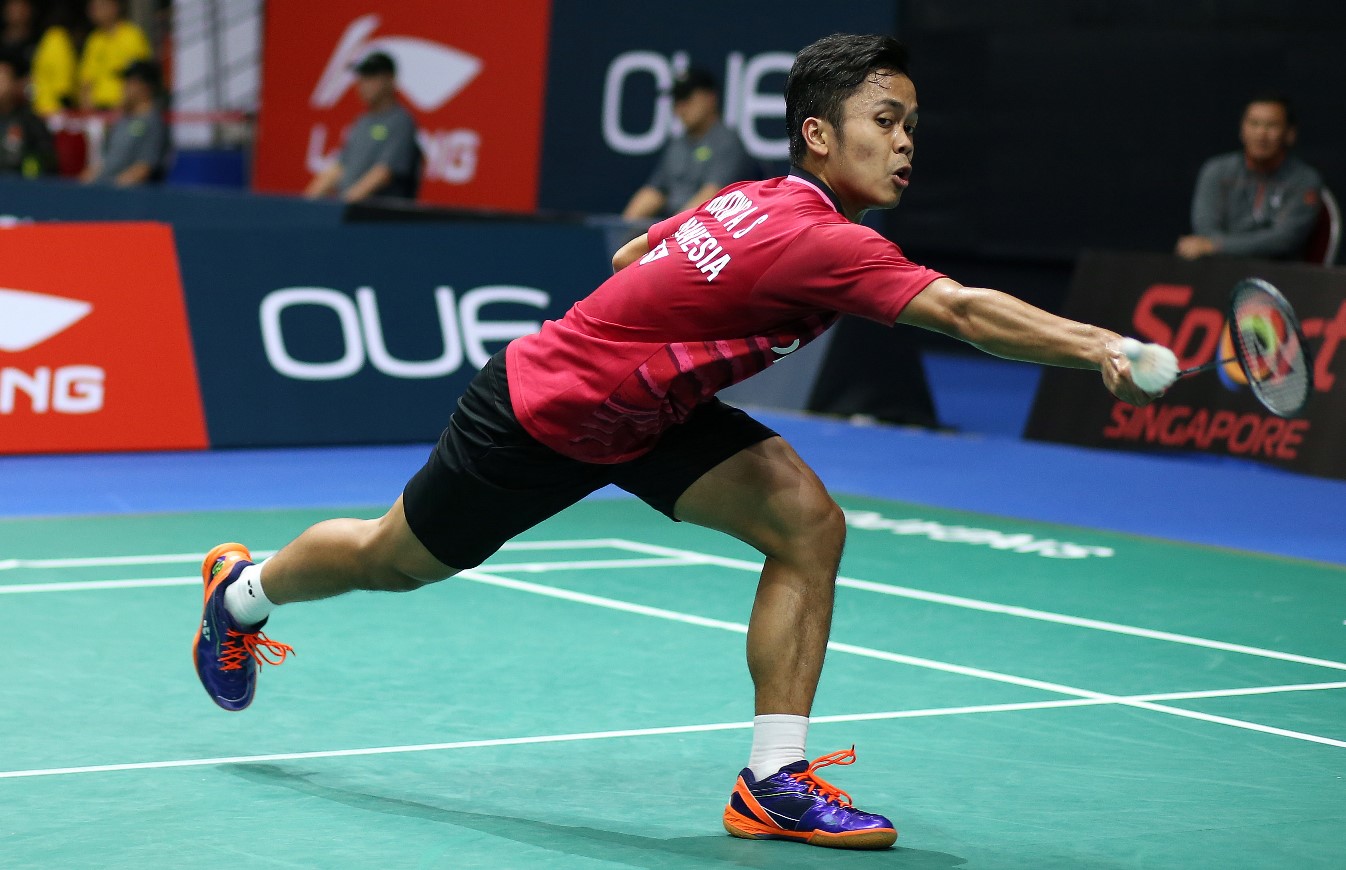 “I actually booked my flight for today so I had to postpone it. I don’t mind doing that,” laughed Srikanth, amid deafening chants of “India, India” from noisy fans.

As for the Easter showdown between team-mates who train together daily, he said it will “definitely be tricky because we know each other very well”.

Greeting each other after Srikanth’s match, both players were in good spirits with Srikanth quipping: “We will be friendly outside the court – but not on court.” 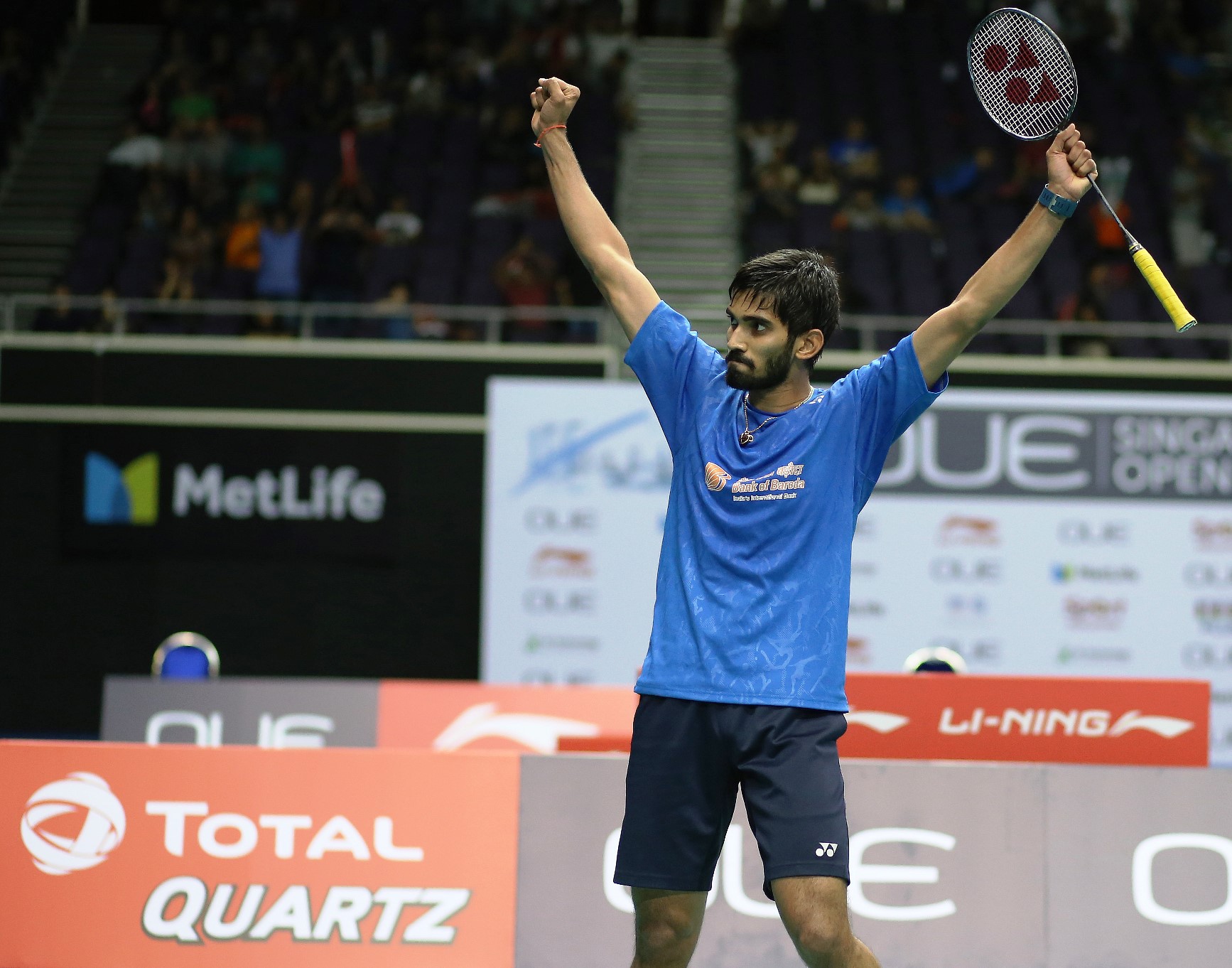