Fans did not have to wait long for shockwaves at the OUE Singapore Open 2017 today, with both defending singles champions beaten and booted by midday.

Sony Dwi Kuncoro – hoping to rediscover the form that swept him to the Men’s Singles summit a year ago – fell to first-round opponent, Lee Dong Keun, in a 76-minute tussle that swung back and forth before the Korean clinched the bragging rights: 19-21 21-15 21-18.

Game one was close until the 2016 winner pulled away from his rival at 15-15 and maintained the lead. In the second game, it was Lee who made the decisive move at 9-9 to level the scores and force a decider. The final game saw two contrasting styles battling to dominate with 32-year-old Kuncoro going for quick points while his younger opponent was clearly intent on playing long, intense rallies.

Ultimately, the latter tactics prevailed as Lee wore down the Indonesian veteran and at 18-18 was able to extract three more points to get across the line – and into the second round at Singapore Indoor Stadium.

“I was confident I could beat him. My plan was to defend well and have a lot of long rallies. I am younger than him and I felt I would be stronger in the third game,” said 26-year-old Lee.

The vanquished title-holder rued the fact that, despite starting well, he failed to execute his strategy at crucial stages.

“Lee was very strong today. He played well. Unfortunately, my ranking will drop now but overall my performance is getting better, even though I lost.” About an hour later, similar misery befell last season’s Women’s Singles conqueror, Ratchanok Intanon; convincingly outgunned by a determined Sayaka Sato (featured image). The Japanese unleashed an attacking onslaught from the start, not giving the Thai player any opportunity to impose herself on the proceedings. Like an Energizer Bunny, Sato dashed to all parts of the court, retrieving shots that would usually fetch Intanon easy points.

The opening game was done in a flash – Sato giving up just eight points – and it appeared the second would be the same case with Sato 18-10 ahead. A run of seven straight points by Intanon gave her fans the hope that she would come back into contention. However, Sato held firm and completed a 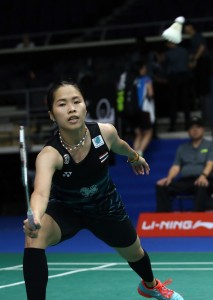 “I wanted to be mentally strong and more aggressive. I needed to be positive and believe in myself,” said Sato whose goal is to reach the quarter-finals and then “see what happens”.

“I expected her to come back after the first game so I wasn’t surprised when she got those points in the second game, but I believed I could still win.”

Intanon rued her unforced errors and praised Sato’s tenacity in chasing down every shuttle.

“She was very fast today and I became nervous. I tried to come back but she was too far ahead,” said the 22-year-old.

Other early Women’s Singles action saw petite Fitriani Fitriani of Indonesia fight past Minatsu Mitani, coming back from a game down to defeat the Japanese, 15-21 24-22 21-17, in 65 minutes, while He Bingjiao (China), Beiwen Zhang (USA) and the in-form Tai Tzu Ying (Chinese Taipei) also progressed.

Wily Men’s Singles veteran Hu Yun survived all that India’s Sameer Verma threw at him, triumphing 28-26 23-21. It was a good morning for Hong Kong as another player, Ng Ka Long, brushed aside Tommy Sugiarto, 21-19 21-17. Unfortunately, fortunes were not the same for the Verma family as Sameer’s older brother, Sourabh, also fell in the first round. The 24-year-old lost to Indonesia’s Anthony Ginting, 21-15 21-14. Ginting’s team-mate Jonatan Christie beat Marc Zwiebler of Germany, 21-18 21-13. In Mixed Doubles, Yugo Kobayashi and Misaki Matsutomo (Japan) got past Thailand’s Nipitphon Phuangphuapet and Jongkolphan Kititharakul, 25-23 21-11. Men’s Doubles saw the retirement of No.7 seeds, Mads Conrad-Petersen and Mads Pieler Kolding at 3-1 up, against Lee Jhe-Huei and Lee Yang (Chinese Taipei). Pieler Kolding had been suffering from a tooth ache and, despite a valiant effort, was unable to play.