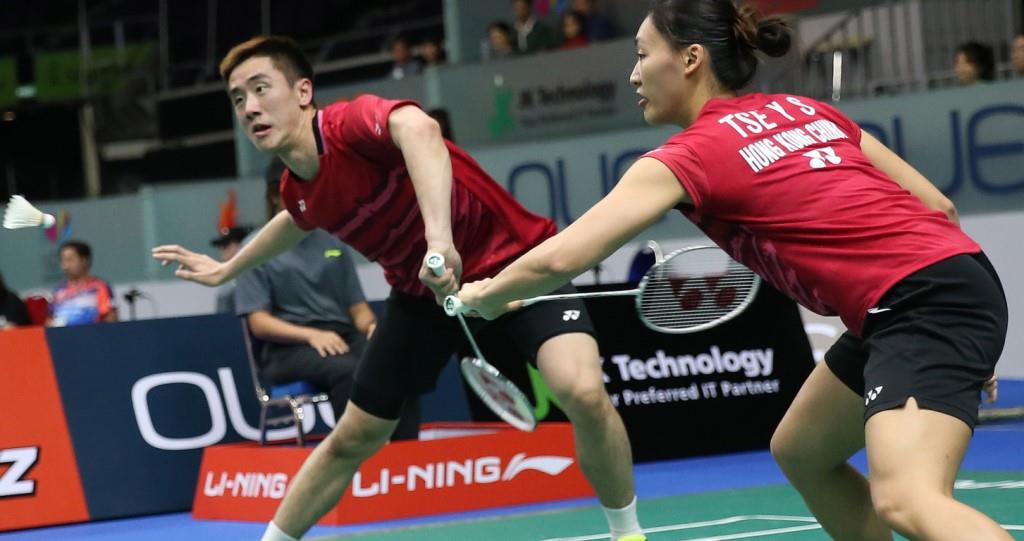 Looking out-of-sorts, Olympic champions Tontowi Ahmad and Liliyana Natsir, fell in straight games in the opening round of the OUE Singapore Open 2017 tonight – to opponents whom they had never played before. Fresh from reaching the Mixed Doubles quarter-finals in Kuching last week, Dechapol Puavaranukroh and Sapsiree Taerattanachai took advantage of Natsir’s inability to move freely and Ahmad’s continued poor form, condemning their esteemed rivals and No.2 seeds to a quick 21-14 21-16 demise.

Having not faced the Rio 2016 gold medallists previously, the Thai tandem had no inhibitions in going about their task, again showcasing their strong all-court skills that proved the downfall of England’s Chris and Gabby Adcock a week ago. Still dogged by an injury to her right knee which she has had since the THAIHOT China Open last November, Natsir could not dominate at net as accustomed while her partner failed to get going until the match was almost lost.

“I have not been playing well and, by the time I got into this match, it was too late,” acknowledged Ahmad.

Though taking nothing away from the Thai winners’ performance, Natsir explained she was reluctant to attempt certain shots, given her limited mobility.

Meanwhile, Puavaranukroh and Taerattanachai were thrilled to oust the Indonesian hot shots and progress to the second round. They are again targeting at least a top 16 result in the Lion City.

“We want to get to the quarter-finals and then see what happens. It is very competitive but we are more confident now because we have been

winning against some of the best pairs.

“We had no pressure today because they are the Olympic champions and the favourites. We were able to control the match and we had good teamwork,” said 25-year-old Taerattanachai. When the first round continues tomorrow there are some potentially intriguing clashes in store, including a repeat of the Rio 2016 Women’s Singles semi-final, featuring Pusarla V Sindhu (India) and resurgent Japanese, Nozomi Okuhara, as well as Busanan Ongbamrungphan of    Thailand versus China’s Chen Yufei who is fast finding her feet in the top flight. In Women’s Doubles, China’s Huang Dongping/Li Yinhui against Kamilla Rytter Juhl/Christinna Pedersen (Denmark) is another exciting prospect while CELCOM AXIATA Malaysia Open winners, Yuki Fukushima/Sayaka Hirota of Japan will aim to keep their good form going over No.4 seeds and All England champions, Chang Ye Na/Lee So Hee (Korea).

Earlier in the day’s qualifying round the following players/pairs earned places in the main draw: