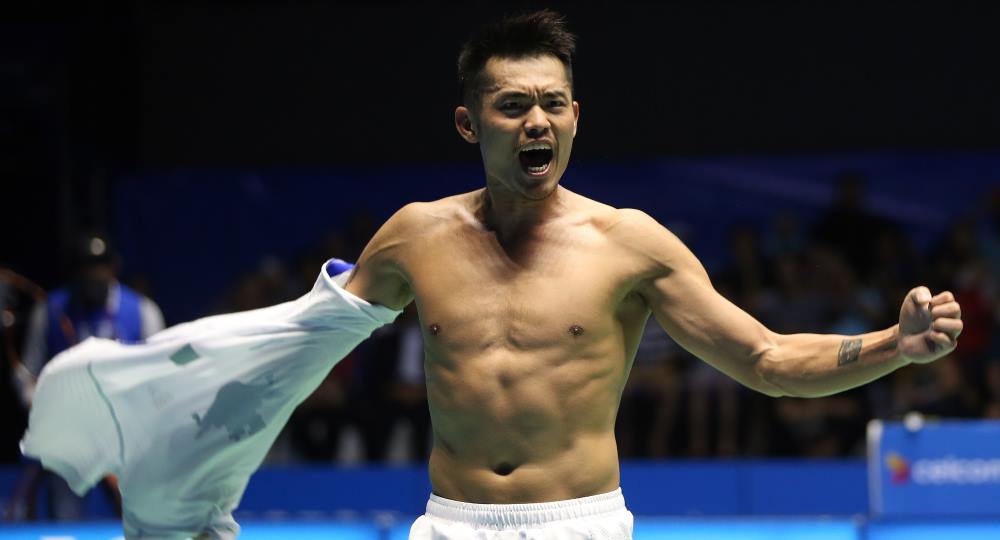 Eight titles had come since Lee Chong Wei’s last loss at the event in the 2007 Malaysia Open. The run ended with a 21-19 21-14 loss in the Men’s Singles final of the Celcom Axiata Malaysia Open 2017 today.

How much the title meant to Lin (featured image) was apparent from the way he burst into an emotional celebration on converting match point – he tore off his shirt and collapsed on the floor, where he lay a long time.

“I was often asked why I hadn’t won an Open tournament in South East Asia,” Lin said. “A friendly reminder – I did win one of my World titles in Kuala Lumpur, but the media was still asking me about this. When I arrived here I had two aims – I wanted as many ranking points as possible, and secondly, I had to break the jinx.”

It was a story of missed chances for Lee Chong Wei. The opening game showcased the best of both gladiators – pinpoint smashes and dives, netshots and flicks – it had it all. Lee moved like a dream, firing crisp smashes on either side of Lin and building a 19-15 lead. Then, inexplicably, it all fell apart.

The top seed seemed to go into a shell with indifferent play, frozen stiff on a Lin Dan flick serve and committing errors of judgement to virtually gift the game to his opponent. Lin celebrated with an exaggerated fist pump – he’d picked the defending champion’s pocket.

A fightback was expected, but it never came. The Malaysian, after initial combativeness in the second, didn’t just seem to have the heart to slug it out and it was all over in under an hour.

“The first game was crucial. I had the lead but made errors and misjudged some of the shots. I lost focus,” said Lee. “Lin Dan played confidently in the second game but I could not lift mine. It’s disappointing to lose but I accept this defeat.”

Lin will move up ten places in the Destination Dubai Rankings, while Lee will move up two into top spot. Other big movers include Wong Wing Ki (Hong Kong) and Korea’s Son Wan Ho – both leap up by 14 places into joint ninth. Facing her strongest challenge since starting an unbeaten Superseries streak last season in Hong Kong, the diminutive star summoned all her guile, precision and power to outwit the woman whom she replaced at the summit of the world rankings. It is surely a victory she will cherish as she did not have it all her own way en route to the 23-25 22-20 21-13 result – and was two points from losing in straight games.

In a finely-poised duel, the two top seeds battled fiercely, drawing the absolute best out of each other and giving the thick crowd inside Stadium Perpaduan in Kuching their money’s worth. Clearly a favourite with Malaysian fans, the Chinese Taipei player – a young connoisseur of placement and changes of pace – was up against the iron will and dogged defence that has brought Spain unlikely badminton stardom; Marin, too, showcasing some classy touches.

At 16-13 up in the first game, Tai watched Marin roar back into contention with five straight points. High intrigue ensued as the score moved to 18-18 and was deadlocked five more times before Marin, benefitting from Tai hitting into the net to offer her a fourth game point, smashed down the middle, Tai helplessly on her haunches.

The second game unfolded in similar cat-and-mouse fashion, neither player able to wriggle free in scoring. The Spanish left-tied the score saving three game points before Tai brought fans to their feet with a cross-court, round-the-head winner and a sizzling forehand that flew past Marin to land deep in the court.

It was anyone’s guess where the title would go with the third game again delicately balanced at the interval changeover – Tai one point ahead. However, Marin failed to maintain her steely resolve and, sensing the match was hers for the taking, Tai surged to the finish with an assortment of strokes that left fans gasping in admiration – her fourth successive World Superseries crown! “I am happy to win, especially in Malaysia where the fans support me. My first few matches were not good but today I started well. Carolina caught up and she was too fast and strong for me at the end of the first game,” said Tai, who levelled their head-to-head 4-4 with this triumph.

“I tried to keep calm and focused as the rallies became shorter. My plan was to keep running and force her into mistakes.”

Despite her disappointment, Marin focused on the silver lining, declaring herself “confident to play tough matches again”.

“I think I played well this week. I knew it would be tough today. She is a really good player and it was a great match by both of us. I am a bit disappointed because I made some mistakes at the end but, I am 100 per cent fit now, and my aim is to be world No.1 again.”

Despite the loss, Marin will supplant Pusarla V Sindhu on top of the Destination Dubai Rankings on Thursday. The Spaniard will move up four places to reclaim the No.1 ranking while Tai will move up five places into No.2.

The top eight players and pairs in the five categories at the end of the 12-event strong MetLife BWF World Superseries circuit will be invited to the season-ending Dubai World Supeseries Finals in December.