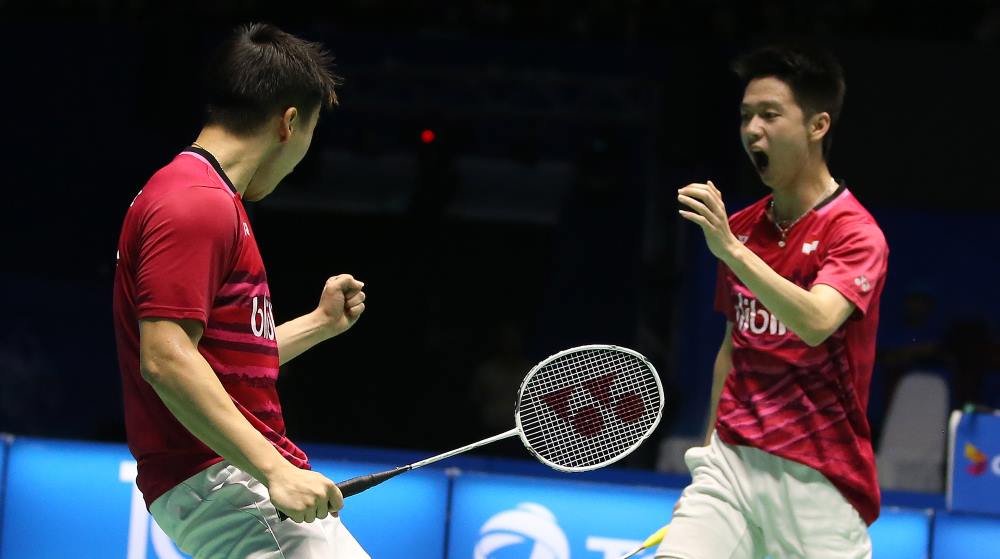 The Indonesians wrapped up final day proceedings to ensure that doubles honours were evenly split between three countries – China in Mixed Doubles (Zheng Siwei/Chen Qingchen) and Japan in Women’s Doubles (Yuki Fukushima/Sayaka Hirota) being the other winners. Fukushima and Hirota’s success in the Women’s Doubles final saw them clinch their first Superseries crown. Gideon and Sukamuljo’s 21-14 14-21 21-12 victory over China’s Fu Haifeng and Zheng Siwei followed triumphs at the Yonex All England and the Yonex-Sunrise India Open this year.

The Indonesians once again put their frenetic energy to good use against Fu and Zheng. Full of quickfire drives and net interceptions, Fernaldi and Sukamuljo were all over the Chinese, giving them no breathing space in the opening game. They appeared to get carried away by their dominance, though, and attempted far too many outrageous shots that handed the advantage back to Fu and Zheng.

Perhaps chastened, they tightened their game in the decider, stinging the Chinese once again with their quick game at the front court. “We’re happy to win our third straight Superseries, but we weren’t playing for any record,” said Fernaldi. “We just want to make sure we perform well each time we’re on court.

“Today we were a bit surprised in the second game when the Chinese started defending. We were also a bit tired and decided to get back strongly in the third.”

A final clear from the Chinese that landed long saw the Japanese embrace each other in a bear hug – capping a stellar run for the World No.18 pair who were unfamiliar faces on the Superseries circuit until recently.

As in previous matches, their success today was built on impeccable defence and deep clears that caught the Chinese in long rallies. The Japanese kept their opponents guessing with their forays to the net, while Fukushima did surprise them from time to time with her rasping smashes.

The Chinese changed the flow in the second, but as the match wore on, the Japanese once again stuck to their trusty rally game, keeping the shuttle in play for long periods and drawing the errors.

Match point was won when Huang misjudged a shuttle that fell well inside, before an overhit shot gave the Japanese their place in the sun.

“It hasn’t sunk in; it doesn’t feel like reality,” said Fukushima. “When it went to the third game we knew we had the advantage. We’ve played them earlier and we knew they were getting tired. The plan was to play steady in the first part of the game.” In Mixed Doubles, Zheng Siwei and Chen Qingchen exacted quick revenge for last Sunday’s defeat by their team-mates, Lu Kai and Huang Yaqiong. The latter came from a game down to savour glory in the Yonex-Sunrise India Open but fell in straight games on this occasion in the all-China rematch.

The top seeds seized early control and never looked back in the 21-15 21-18 triumph which stopped Lu and Huang’s run of success in this year’s MetLife BWF World Superseries, the losers having prevailed at the Yonex All England too.

“We were better prepared than our team-mates. They made a lot of errors,” said Zheng. “I tried to keep calm even when we made mistakes, I shook them off immediately and focused on the next point.”