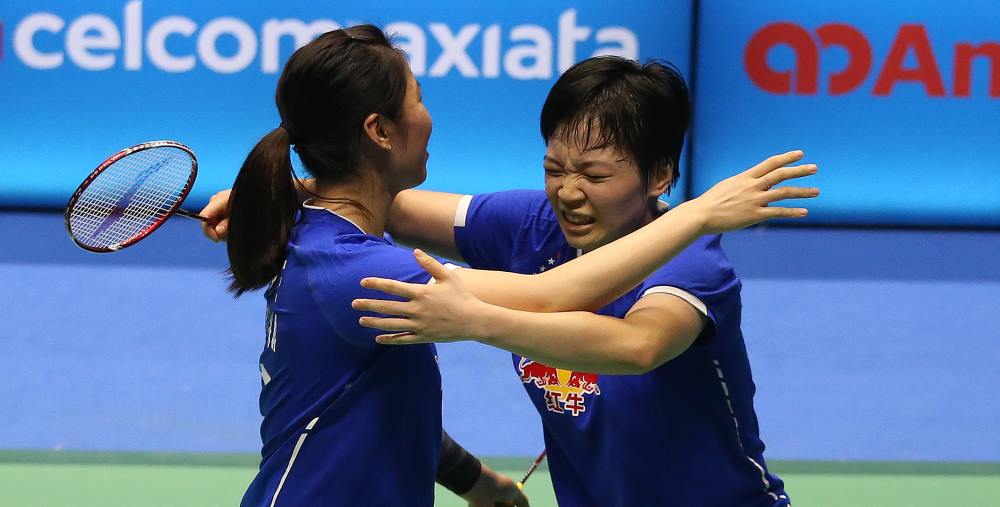 Unheralded pair Chow Mei Kuan and Lee Meng Yean gave an almighty scare to No.4 seeds Chen Qingchen and Jia Yifan in the second round of the Celcom Axiata Malaysia Open 2017 today.

The Women’s Doubles No.25 duo from Malaysia did everything right but couldn’t quite pull the plug on the hot contenders even as they sent the crowd wild with their sensational display.

An upset looked very much on the cards after the Malaysians took the second game and ran away to a 17-10 lead in the third. Chen and Jia (featured image) showed their doggedness at this point, refusing to buckle and winning ten of the next eleven rallies to gain match point.

With the crowd hollering its support and cheering every shot, Chow and Lee defended with their lives, returning everything the hard-hitting Chen and Jia threw their way. The Malaysians even had match point, but the Chinese wriggled free and finally converted their own fourth opportunity: 21-17 18-21 25-23.

“We lost to them in Macau but that match gave us the confidence that we could beat them,” said Chow. “It was very close today; we had our chances but we couldn’t take them.”

It was a good day for China in Women’s Doubles, with three other pairs – Huang Dongping/Li Yinhui, Bao Yixin/Yu Xiaohan and Huang Yaqiong/Tang Jinhua – joining Chen/Jia in the quarter-finals. In Mixed Doubles, Denmark’s Joachim Fischer Nielsen/Christinna Pedersen will run into a familiar foe tomorrow when they take on China’s Zhang Nan, partnering Li Yinhui after the retirement of Zhao Yunlei. Fischer Nielsen and Pedersen dominated Japan’s Kenta Kazuno/Ayane Kurihara in their 42-minute second round clash, 21-13 21-19. “It’s long since we played Zhang Nan. We’re looking forward to playing him,” said Pedersen. “We’ve seen the young girl (Li Yinhui) play, I’ve played her in Women’s Doubles too. They are a strong Mixed Doubles pair, really fast, we have respect for them but also believe we have a chance and the game to beat them.

“I think she’s good mover, she has a good defence and she’s aggressive at the net. In Women’s Doubles I saw that she was more at the backcourt. So I think it’s going to be different tomorrow; we definitely need to watch some videos. New combinations can be tricky, but we also like to play different pairs. Tomorrow’s going to be interesting and we look forward to that.”

Men’s Singles top seed Lee Chong Wei destroyed the challenge of Hong Kong’s Hu Yun in just 27 minutes. Lee was in imperious form, stubbornly refusing to let anything past him, and a forlorn Hu lost the plot 21-8 21-6.